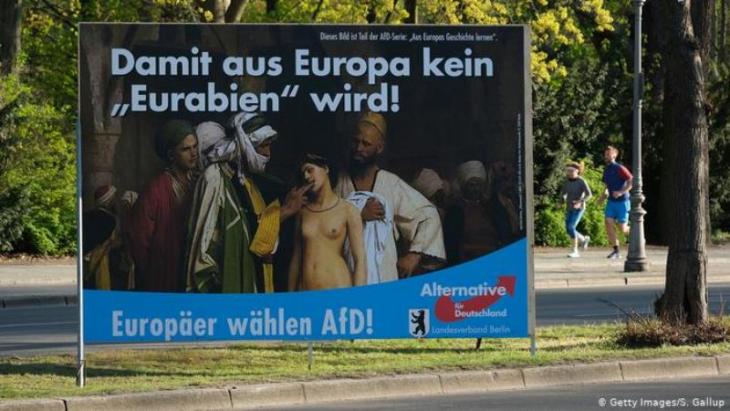 Consolidating its major party status in recent European elections, the AfD succeeded in part through the use of the arts in its campaigning. Critics fear that it is part of an ongoing push for "cultural hegemony". By Stuart Braun

As I was approaching my neighbourhood shopping street the day before the European election, I was struck by a large truck bearing German flags and logos for the far right-wing party, Alternative fur Deutschland (Alternative for Germany), or AfD, but also by a large reproduction of an oil painting. It featured some swarthy, sinister-looking robed men sizing up an enslaved, lighter-skinned woman and was accompanied by the slogan: "Europeans vote AfD … So Europe doesn't become Eurabia!"

Eurabia is an Islamophobic term used in connection with a conspiracy theory positing that Muslim people will soon overrun Europe – a theory pushed by Norwegian extreme-right terrorist Anders Breivik, who murdered 77 people in 2011.

The poster – one of several from the AfD's "Learning from Europe's history" campaign that re-interpreted famous artworks to push a xenophobic agenda during the EU election – features "The Slave Market" (1866) by French painter Jean-Leon Gerome, an Orientalist work that itself has been judged to present racist tropes from colonial times.

The same image was also used to remind voters of what happened in Cologne during New Year's Eve in 2015, where hundreds of sexual assaults were attributed to men of "North African" appearance.

Just as the AfD refused to take down the poster after requests from the owners of the original work, party activists have been trying to censor cultural institutions. The party recently pressured the organisers of the exhibition titled "Immer wieder? Extreme Rechte und Gegenwehr in Berlin seit 1945" (Again and again? The extreme right and resistance in Berlin since 1945) at Berlin's Rathaus Neukolln (Neukolln Town Hall) to remove content related to the party during the elections to the European parliament.

"We want to use the exhibition to draw attention to the continuities of the extreme right in Berlin and at the same time to point out facets of social resistance," said Vera Henssler of the "Antifaschistisches Pressearchiv und Bildungszentrum" (Antifascist Press Archive and Education Centre) in an interview. "The AfD is only a small part in this story, but it is unquestionably one of the actors." 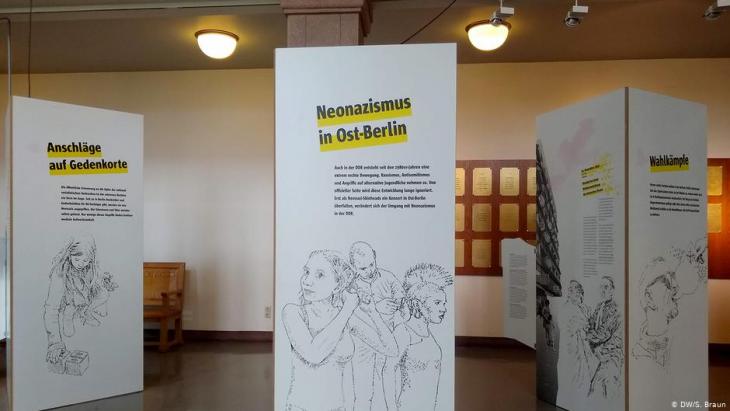 Criticise the rise of right-wing extremism at your peril: the organisers of the exhibition "Immer wieder? Extreme Rechte und Gegenwehr in Berlin seit 1945" on show in Neukolln Town Hall, Berlin recently came under pressure. The AfD wanted them to remove all party-related content on the recent European elections

The AfD-related exhibition material mentions, for example, how party members joined neo-Nazis on the streets in anti-"Islamisation" protests during the peak of the migrant crisis in 2014 and 2015. It also traces how right-wing elements have gained ground within the AfD – initially an anti-EU party – and made Islamophobia a central platform.

After the election, the removed panels were restored to the exhibition. In reaction, the party says it will seek a court order to have them removed, calling the exhibition organisers a "left hate" organisation and adding that since they receive government funds, they should be neutral and uncritical: "We will not tolerate this in public spaces with public funds," said AfD Berlin party spokesperson Ronald Glaser.

The AfD has sought to censor cultural and educational institutions on a number of occasions. It sued the Berlin Social Science Centre (WZB) over a study on the "Parliamentary Practice of the AfD in German State Parliaments", declaring that it violated their "personality rights." But in April, a court declared the study valid and in accordance with the right to academic freedom and freedom of speech.

Home
Print
Newsletter
More on this topic
Islamophobia in Germany: "We need a new debate about racism"Islamophobia: Criticism of religion? Blatant racism!Right-wing populism in Europe and the USA: Those who cry wolf
Related Topics
AfD | Alternative for Germany, Art, Islam in Germany, Islamophobia, Muslims in the West, Racism | discrimination, Right-wing populism, Xenophobia
All Topics

One in four people in Germany has a migration background, but less than 8% of the members of parliament have foreign roots. Germany is out of touch with reality, says Maissun ... END_OF_DOCUMENT_TOKEN_TO_BE_REPLACED

Germany’s electorate includes some 7.4 million citizens with international roots, while many more millions of residents from abroad aren’t allowed to vote. Both groups are often ... END_OF_DOCUMENT_TOKEN_TO_BE_REPLACED

Germany's foreign policy is explicitly values-based. But what happens, Ralf Bosen asks, when democracy, the rule of law and human rights collide with the logic of trade and ... END_OF_DOCUMENT_TOKEN_TO_BE_REPLACED

No other Western poet was arguably so well-versed in the Koran or so fascinated by Islam as Germany's national hero, Goethe. In a new publication that examines all Goethe's ... END_OF_DOCUMENT_TOKEN_TO_BE_REPLACED

Migrants are often maligned as being responsible for Europe's problems. Yet their integration is in Europe's interest. Michael Thaidigsmann believes that a long-term vision is ... END_OF_DOCUMENT_TOKEN_TO_BE_REPLACED

How could the Afghan government and its institutions collapse so quickly? That things were going wrong in Afghanistan had been obvious for a long time, yet the West preferred to ... END_OF_DOCUMENT_TOKEN_TO_BE_REPLACED
Author:
Stuart Braun
Date:
Mail:
Send via mail

END_OF_DOCUMENT_TOKEN_TO_BE_REPLACED
Social media
and networks
Subscribe to our
newsletter