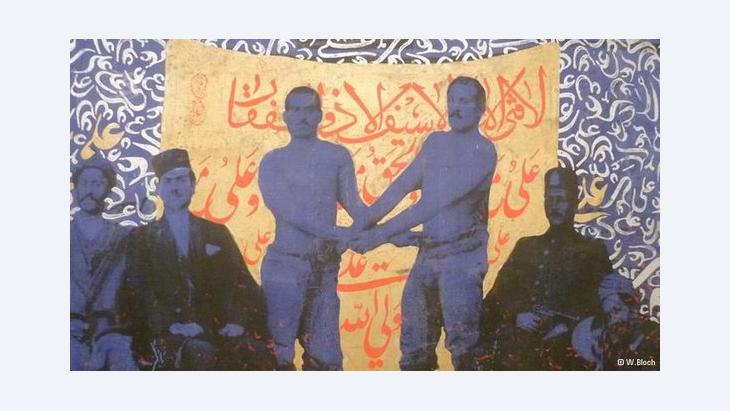 Gallerists, artists and the curious public decamped this week from the United Arab Emirates as Art Dubai drew to a close. As was to be expected, not only art, but also political messages played a major role at the fair. Werner Bloch reports

Berlin gallerist Matthias Arndt spends much of his time travelling the world, but he had never experienced anything like this before. On 21 March, the opening day of Art Dubai, police detectives suddenly appeared at his stand and demanded that he take down a picture by his premier artist within thirty seconds. The art experts in Dubai's police department had discovered at the show works by the Iranian painter Khosrow Hassanzadeh that the censors found objectionable.

What made the work so controversial were the words "Ali madat" ("Ali, give us strength"), which were written on the canvas. Invoking Ali is an everyday matter for Shias, but Sunni-dominated Dubai evidently mistook these words for a political battle cry. Especially now that tensions between Iran and the West are on the rise, the overcautious Emiratis thought that a line had been crossed.

At the latest with this incident, it is plain to see how eminently political Art Dubai – the most important art fair in the Arab world today – has become.

Art looks at the Arab revolution 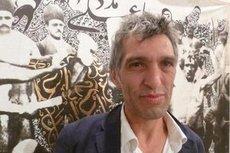 Artists crossing the line: Ultra-sensitive Emirati censors insisted that "Ali, give us strength" by Khosrow Hassanzadeh be removed from the stand of Berlin-based gallerist Matthias Arndt at the art fair Art Dubai

​​Mounted for the sixth time at a luxury hotel, framed by palm trees and one of Arabia's most beautiful beaches, Art Dubai is still the most elegant and luxurious fair in the world. And as there is – with the exception of Doha – not a single museum for Arab contemporary art in the Middle East, Art Dubai assumes this function as well. It is not merely a trade fair, but rather the showcase par excellence for Arab contemporary art.

Here, the Arab revolution is seen from the artistic viewpoint. The Atassi Gallery in Damascus, for example, showed the work of Fadi Yaziji, who with a Pinocchio-like wooden sculpture makes fun of the once-almighty Syrian secret service and its snooping. Yaziji dedicated his artwork to a hero of the Syrian revolution, the singer al-Kashoosh, who composed the hymn of the Syrian opposition and was murdered last July. His assailants cut the vocal chords out of his throat.

Extreme depictions were on display at the stand of the Artspace Gallery from Dubai as well. An oil painting on sale for 8,000 dollars united Gaddafi, Ben Ali and Mubarak as repulsive fat-bellied castrati – but the whole thing looked like it was trying too hard, catering too much to the art market to be taken seriously as a genuine statement.

Art as a cultural memory and a laboratory of change

Nevertheless, art in general remains an important medium in the region – for one thing, because it is able to have a say on history and politics. People in Lebanon have not yet really come to terms with the civil war that took place there. Today Raed Yassin, born in 1979, paints pictures of the decisive battles on large Chinese vases, thus making art a way of preserving the country's collective memories.

The highly original artist Nadia Kaabi-Linke, who lives in both Berlin and Tunis, is trying her hand at creating utopias instead, inventing a new code for social relations in the Arab world. "Black is the new white" aesthetically calls into question entrenched patterns in society, deploying means including a PR machine invented by the artist. 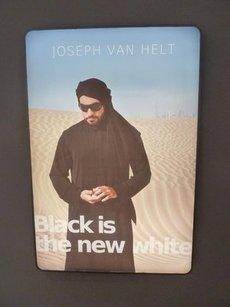 Artists turning things on their head: with her fictitious advertising poster "Black is the new white", the artist Nadia Kaabi-Linke shows us life in reverse (in Arab countries, it is often women who wear black and men who wear white)

​​The financial crises and political earthquakes of recent years have evidently not done Dubai any real harm. The emirate is booming once again. After nearly going bankrupt in 2008 and being written off by many, Dubai has in fact profited from the crisis. Money from Syria, Libya and Egypt is pouring into the Gulf like never before.

Abandoned real estate projects are being started up again. At the beginning of Art Dubai, Sheikh Mohammed bin Maktoum announced the construction of a grand opera house – a project that once failed spectacularly under the aegis of the German culture manager Michael Schindhelm.

One can view all of this with a touch of irony: at the Hosfelt Gallery, German artist Luka Fineisen showed a glass case containing small flakes of gold being wildly whirled through the air by three rotating hair-dryers before then settling on the ground – a critique of today's turbo capitalism.

Rise of the gallery quarter and triumph of photographic art

The art scene continues to expand here year after year, not only at Art Dubai, but also in the growing gallery quarters Al Quoz and Bastakiya as well as in the central financial district. It is at the heart of this financial district that the photo gallery The Empty Quarter is currently presenting a one-of-a-kind group exhibition of work by female photographers from Yemen, Morocco, Libya and Gaza. These are works of exceptional quality that would be welcome anywhere in Europe – pictures that the gallerist Elie Domit has gathered together in a large glazed exhibition space.

In her photos, Boushra Almutawakel from Yemen uses Barbie dolls to demonstrate social life in her country. In a photo series, the "Arab Barbie" wears progressively darker clothes and increasingly concealing veils, ultimately ending up as a fully veiled burqa monstrosity.

There is no shortage of art buffs and buyers in Dubai. Seventy-five museum groups from across the globe attended the fair. "It used to be that many people came just to look, but today all of the international galleries enjoy healthy sales," says Viennese gallerist Ursula Krinzinger, a pioneer at the Gulf art fair. Compared to last year, sales were up by an estimated 20 to 30 per cent.

Dubai as a platform between Europe and the Far East 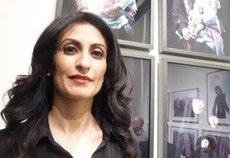 Artists holding up a mirror to society: with her "Arab Barbie" photo series, the Yemeni photographer Boushra Almutawakel highlights social life and the trend towards wearing veils in her country

​​In the motley crowd of people of different skin colours and ethnicities, displaying all the new diversity of Dubai, it soon becomes clear that the world no longer revolves around Europe alone.

Matthias Arndt, the Berlin gallerist, is convinced that there is a new global art culture that extends from Europe to Australia and includes everything in between. Arndt does not fear this development, typifying the new gallerists who don't just cling to the status quo, like so many American and European galleries: "My two artists Gilbert and George always tell me: Change is good. And there's no need to be afraid of things over which you have no control."

Art Dubai has always endeavoured to act as a platform between Europe, America and the Middle East. "Now we're going a step further," says the fair's distinguished director Antonia Carver, the woman who made Art Dubai the prominent, high-quality fair it is today. "Now we're reaching out to Africa and to the Far East. What matters today are new contacts, new networks." In Dubai, that happens surprisingly fast.

Home
Print
Newsletter
More on this topic
The Rise of Dubai: A Laboratory City in the DesertCreative Protest against Syria's Regime: The Puppet RebellionBiennale in Yogyakarta: Art in the Dangerous Terrain of Religion and PoliticsContemporary Art in Saudi Arabia: Images of a Changing SocietyContemporary Art in Lebanon: Between Dreams and Violence
Related Topics
All Topics
Date:
Mail:
Send via mail

END_OF_DOCUMENT_TOKEN_TO_BE_REPLACED
Social media
and networks
Subscribe to our
newsletter