One hundred years ago an exhibition titled "Masterpieces of Muhammadan Art" was put on show in Munich. Now some of the very same pieces are being presented again – but only as a backdrop for modern art from the Arab world. Walter Kittel reports 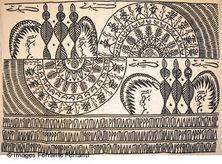 ​​A magnificent brass plate from Iraq, populated with horsemen, dancers and musicians alongside the portrait of an Afghan Sultan. Or a rock crystal ring made in the 11th century from the treasure chambers of the Caliphs of Cairo, as well as Iranian silk carpets that delighted European kings and princes. Around 30 such precious items form the centrepiece of the exhibition at Munich's Haus der Kunst. They are presented in small cabinets, fashioned from finely woven black fabric.

These elaborately designed works had Munich visitors in raptures 100 years ago, when they were presented as part of the exhibition "Masterpieces of Muhammadan Art". That show was on a much grander scale.

A small sketch by Wassily Kandinsky serves as a reminder today of just how far several major European artists were influenced by the elaborate exhibition. August Macke and Henri Matisse were among those who visited the treasures on show in Munich. More than 1.3 million people in total came to view the pieces.

A look to the future

​​Today however, recalling this major art event a century ago is merely a way of providing a majestic backdrop to modern Arab art created over the last 100 years. The exhibit's main focus is undoubtedly contemporary art. Grouped around the central exhibition hall with its ancient treasures, some of which date back 1,000 years, are numerous smaller rooms showing contemporary works of art.

Here the output is dominated by artists from the Middle East, many of them young, and some of them quite new to the scene. Many of them live and work just as they always have in their home countries: in Cairo, Beirut, Dubai or the West Bank. Others have chosen London, Paris or New York as a place to study and set up home.

Many of the works are based on or inspired by eastern myths and traditions that few are familiar with in the West. One piece consists of 99 banners dedicated to Islamic mystics, embroidered with Arabic letters and symbols and suspended from the ceiling. In another, a video alludes to the filming of a Persian love epic, whereby the artist Abbas Kiarostami who lives and works in Iran has actually just captured the emotion in the faces of Iranian viewers, who are often moved to tears.

​​In contrast, artists in the West Bank are producing highly political and socially critical work. For example, 31-year-old artist Wafa Hourani from Ramallah has designed a futuristic vision of the Palestinian refugee camp Qualanda. It displays an interlaced complex of buildings with goldfish pools, a mirrored garden and countless antennae bent towards fantastical figures. The antennae appear to shine a glimmer of hope on the repressive nature of everyday life.

"Art draws us a true picture, and informs people of what is going on," says Wafa Hourani. "People should only look at art, they don't need a television." When asked why he became an artist, Hourani responds with confidence: "I believe that art is more powerful than other means."

The exhibition "The Future of Tradition – the Tradition of Future" can be viewed from 17 September 2010 until 09 January 2011 at the Haus der Kunst in Munich.

END_OF_DOCUMENT_TOKEN_TO_BE_REPLACED
Social media
and networks
Subscribe to our
newsletter