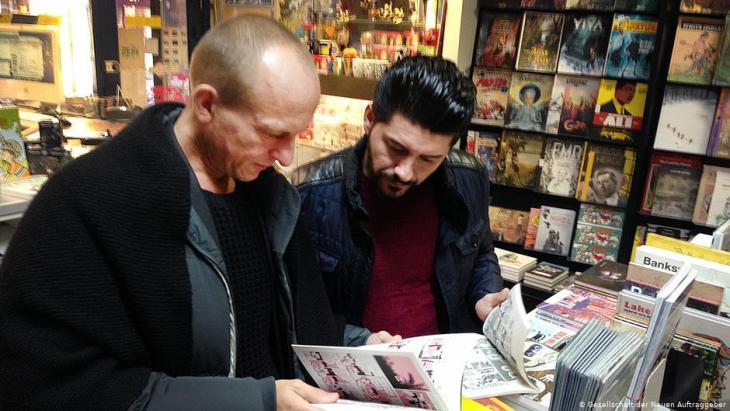 The New Patrons seek to sponsor art projects initiated by citizens in order to better dovetail art and life. Anyone can become their client. In Berlin, the impressive comic "Temple of Refuge" was created on behalf of the Iraqi-Kurdish refugee Sartep Namiq, describing the story of his flight and the hope for a better life. By Stefan Dege

Sartep Namiq's story begins in his Iraqi-Kurdish homeland. When the living conditions there became unbearable due to drought that made the trees die and lakes dry up, his exodus began. Sartep joined the stream of refugees and new arrivals who ended up in Berlin after a dangerous and adventurous journey.

Namiq's story is told through the illustrated graphic novel, Temple of Refuge. It's named after his first home in Berlin: Tempelhof Airport – a former airport built by the Nazi regime, which was transformed into a temporary refugee shelter. Yet in the book, instead of looking bleak, it is a comfortable place to live, a valuable shelter where dreams of a better future come true for its residents. "Of course, this is a modern fairytale," admits Sartep Namiq. "But why not dream of a place where everyone has the same opportunities, whether they are rich or poor?"

Illustrator Felix Mertikat created the book's images. With angular, minimal strokes, its panels set the scene for Sartep's journey, illustrating the departure of the overcrowded rubber dinghy from a Mediterranean beach in North Africa, and refugees wandering through the streets of Rome, before continuing on a long journey in winter through south-eastern Europe. Finally, the travellers come face-to-face with the concrete walls of "Fortress Europe", guarded by hooded, heavily armed police officers. Soon, they escort Sartep and his companions in white buses to the refugee camp on Tempelhofer Feld.

The story's images are powerful, as they must be, because the graphic novel does not include words. It was the speechlessness of the refugee camp's residents that gave Sartep and his friends the idea of doing a graphic novel four years ago. They were helped in their goal by the German chapter of the New Patrons organisation. 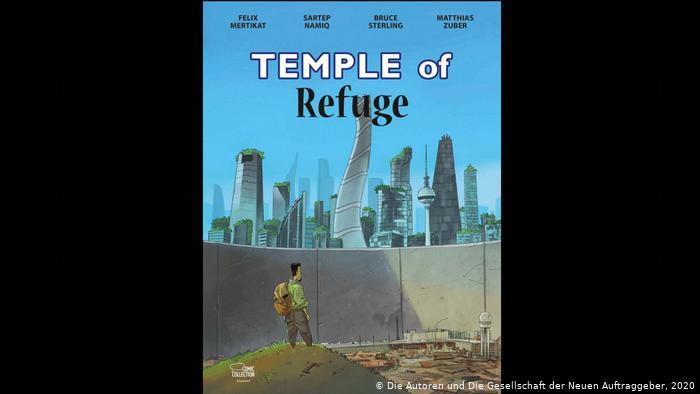 Sartep's vision emerges: the book's main character, migrant Sartep, stands in front of the concrete wall of Fortress Europe. In front of this inaccessible world is the Tempelhof Airport refugee camp, which can be seen in the foreground of the cover (pictured). In the story, the young northern Iraqi finds an imaginative way to reconcile both worlds 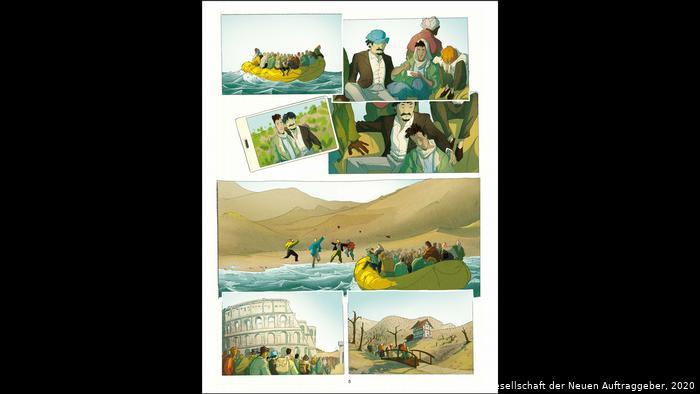 Recounting the journey: in striking images, the comic-style book "Temple of Refuge" depicts Sartep's perilous journey from Kurdish northern Iraq. It takes him across the Mediterranean, where he and fellow refugees wander through the streets of Rome. They then make the long trek through wintry southeastern Europe 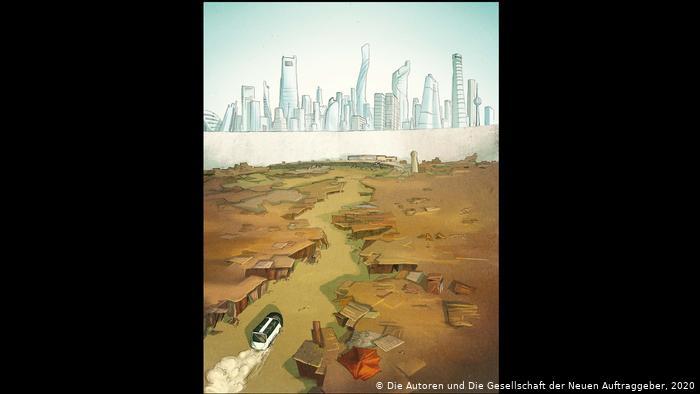 A world without hope: a white bus speeds through a shantytown on Tempelhofer Feld toward the wall that separates two worlds. On one side, a refugee camp; on the other, the desired destination of many: Europe. The camp is spread out like a labyrinth at the foot of this fortress, whose walls seem impenetrable 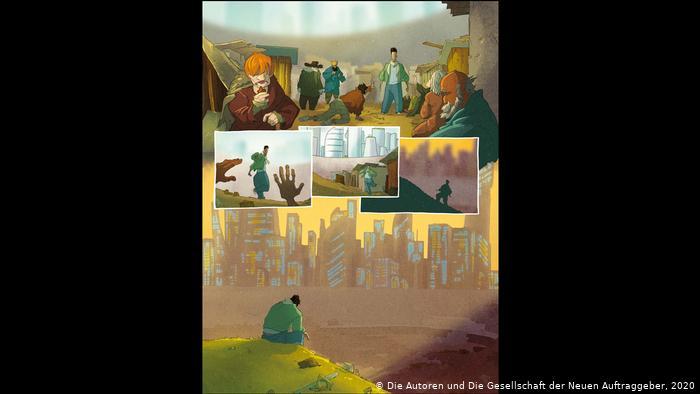 United by fate: People from many parts of the world live in the camp – they are united by a sense of hopelessness. Graphic artist Felix Mertikat has drawn powerful images to tell the story of Sartep Namiq who in reality was a resident of the temporary refugee shelter at Tempelhof Airport. He commissioned this work and also became its protagonist 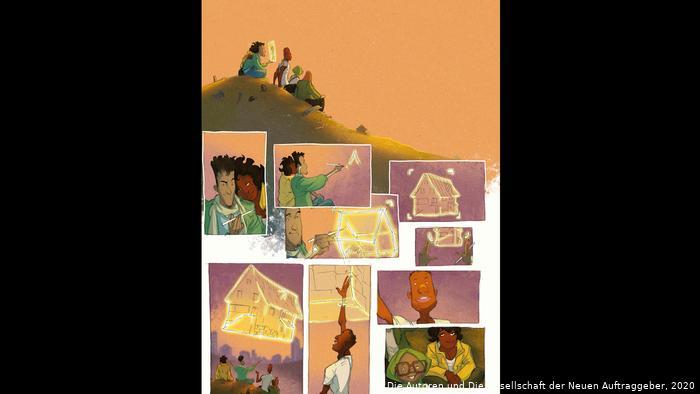 The Berlin miracle: only a miracle can break through the hopelessness of the people in the refugee camp on Tempelhofer Feld. Thanks to a special kind of magic wand, Sartep succeeds in fulfilling the wishes and dreams of the refugees. His vision of peaceful coexistence with all Berliners finally becomes reality 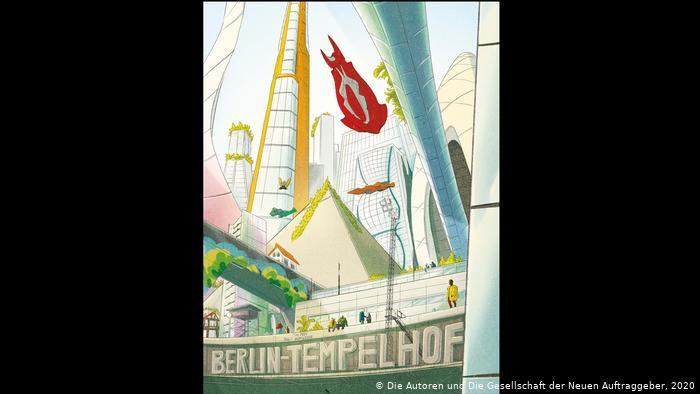 Creating a utopia: by the end of the story, Tempelhof Airport becomes the centre of the world; a place where dreams can come true, thanks to a strong community. "Temple of Refuge" was commissioned by the German chapter of the New Patrons and will be released by Berlin publishers Egmont in March 2021

The comic will be released in early March in a hardcover edition of 5,000 copies by Egmont comic publishing company in Berlin. Alongside famous cartoon characters like Donald Duck, Lucky Luke and Asterix, Sartep, the hero of the Temple of Refuge, is in good company.

Additional heroes of this endeavour are the New Patrons (Neue Auftraggeber in German), a network of people who want to make a difference by helping to commission works of art. "Why is it still the case in democratic societies that only one percent of the population has the opportunity to sponsor new cultural assets?" asks Alexander Koch, director of the German chapter of the New Patrons. The movement, which Koch calls a "democratisation initiative", began in France.

"Art can create awareness about problems," says Koch, who is himself involved in the art scene, ″by doing something that couldn't have been imagined before."

That's exactly what happens in the Temple of Refuge. In the story, an implanted chip gives the hero Sartep magical powers. With it, he can make the wishes and dreams of the inhabitants of Tempelhof come true. The walls of Fortress Europe begin to crack, plants grow. A new, ecological city emerges, in which newcomers and established Berliners live together peacefully. The comic creates a utopian life and society. 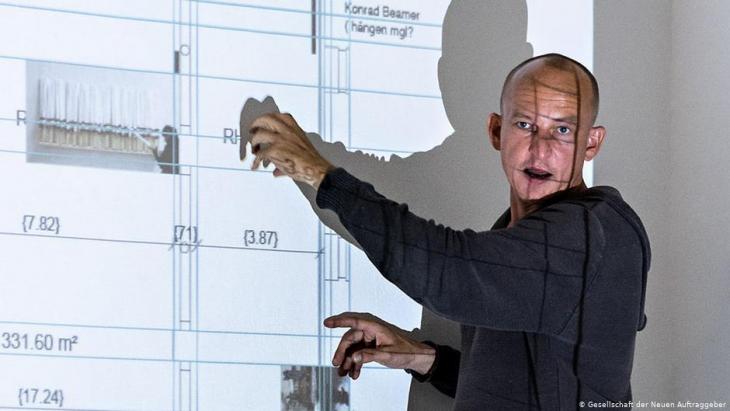 Anyone can become a client: "Why is it still the case in democratic societies that only one percent of the population has the opportunity to sponsor new cultural assets?" asks Alexander Koch. "Art can create awareness about problems by doing something that couldn't have been imagined before"

Like Sartep, anyone can apply to have their project funded. Mediators of the New Patrons group help bring a project to life – most concepts revolve around communication and strengthening communities. For example, the New Patrons of Monchengladbach, in northern Germany, are commissioning an urban garden for an unemployment centre that reflects on the city's social roots.

The organisation's values are reflected in the commissioning of Temple of Refuge, which is funded by the Institute for Foreign Cultural Relations (IfA), the German Foreign Office and the Fondation de France.

The hardcover edition will be published by Egmont publishing company in March and cost €10. All proceeds will be donated to Sea-Watch, which rescues refugees in distress on the Mediterranean Sea.

The New Patrons plan to give away another 10,000 copies of a paperback version to German schools, refugee centres, and refugee initiatives in the Arab world. "If just one person reads this story, it will have been worth it," says Sartep.

Translated from the German by Sarah Hucal

Even in times of war and pandemic, refugees are still being deported to Afghanistan. Several deportation flights have taken place in recent weeks alone. Since those affected often ... END_OF_DOCUMENT_TOKEN_TO_BE_REPLACED

The USA and NATO plan to withdraw from Afghanistan by September. The operation is risky, the outcome uncertain. Many Afghans fear civil war. The quake on the Hindu Kush will also ... END_OF_DOCUMENT_TOKEN_TO_BE_REPLACED

German Middle East analyst Guido Steinberg and television journalist Ulrich Tilgner have both published new books on the conflicts in the Middle East. Their analyses and their ... END_OF_DOCUMENT_TOKEN_TO_BE_REPLACED

On 7 March, Switzerland became the latest European country to vote in favour of a so-called "burka" ban. It was yet another feather in the cap of the right-wing populist Swiss ... END_OF_DOCUMENT_TOKEN_TO_BE_REPLACED

Syrian-born Rafik Schami is a gifted storyteller and one of the most successful authors writing in German today. In his 50 years in exile in Germany, he has introduced the Arab ... END_OF_DOCUMENT_TOKEN_TO_BE_REPLACED
Author:
Stefan Dege
Date:
Mail:
Send via mail

END_OF_DOCUMENT_TOKEN_TO_BE_REPLACED
Social media
and networks
Subscribe to our
newsletter