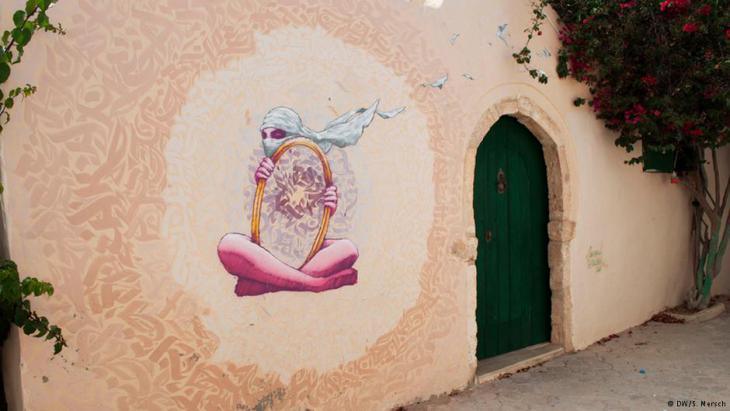 ″Art of Freedom. Freedom of Art″ in Tunisia
Carving out a niche between terror and bureaucracy

Resulting from political changes in the wake of the Arab Spring five years ago, Tunisian artists have gained more freedom. But, as Sarah Mersch writes, those rights are under threat – from religious fanaticism and government pressure

Ten months after the attack on the Bardo Museum in the Tunisian capital, which killed more than 20 people, barbed wire, police checkpoints and a plaque at the entrance continue to serve as a reminder of the violence.

"Good morning. Who is it you wish to see?" inquires a policeman sceptically, following up the question with a perfunctory nod that grants our entrance.

Inside the building, the entrance hall is dominated by a tall mosaic. Moncef Ben Moussa, the museum's curator and guardian of the world's largest collection of mosaics, says the event left deep wounds, "but we must look ahead."

"We cannot and do not want to forget what has happened," he explains, adding that following the recent destruction of cultural sites in Afghanistan, Iraq and Syria, the attack on the museum should not really have come as a surprise. "Perhaps we simply chose to ignore the alarm bells for too long," he admits, opining that it was no coincidence that, of all potential targets, this particular museum fell victim to an attack and that the perpetrators were not merely aiming to de-stabilise Tunisia′s economically crucial tourism industry.

″An attack on humanity″

The Bardo Museum brings together all the civilizations and paradigms that have shaped 3,000 years of history in this Maghreb country: from the Carthaginian wars to the evolvement of Tunisia as the Roman empire's major breadbasket, from Arab conquerors establishing some of Africa's main Islamic sites to the foundation of Africa's oldest existing synagogue by Jewish immigrants. "When Tunisians come to the museum, they're proud to be part of this rich cultural heritage," says Moussa. "And when foreigners visit, they come to realise that, probably to a smaller extent, they share some of this Tunisian heritage. It is this universal notion of humanity that the terrorists attacked."

The number of foreign visitors plummeted in the aftermath of the attack. Moussa adds, however, that more Tunisians than ever before are now visiting the Bardo museum, many for the first time, which has almost made up for the decline in international visitors. Now, he says, many students who visit the museum on a school trip subsequently return with their parents. The curator can't help but smile. 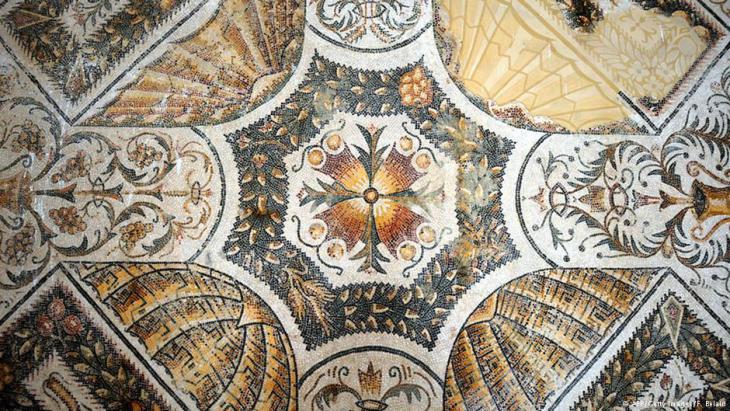 The Bardo Museum and Tunisia′s tourism industry: victims of jihadist terrorism. In March 2015, IS attacked the Bardo Museum in Tunis; in June a beach and a hotel in Sousse were the targets. Sixty people in all died

"Most people my age are not aware of the importance of culture," Moussa explains, adding that under Ben Ali's former dictatorship, culture was either exploited for propaganda purposes or neglected. "Culture is a means of enlightenment, but dictators aim to keep the people in submission and ignorance." These days, it is apparently terrorists who are applying the same measures in pursuit of their goals.

While Ben Moussa is seeking to raise awareness about the country's cultural heritage among young Tunisians, others are taking art out of the museums and galleries and bringing it onto the streets. Since the political upheaval of 2011 and the subsequent regime change, street art in Tunisia has been booming.

"Before the change, people could only create art commissioned by the government. Nowadays, people create art for the sake of their audiences and for art itself," says Mohamed Kilani Tbib, known under his pseudonym "The Inkman". The 25-year-old graphic designer produces what he calls calligraffiti – calligraphic graffiti. Tbib sprays single words or verses of poetry in "preferably busy locations, so that everyone has free and direct access to it." 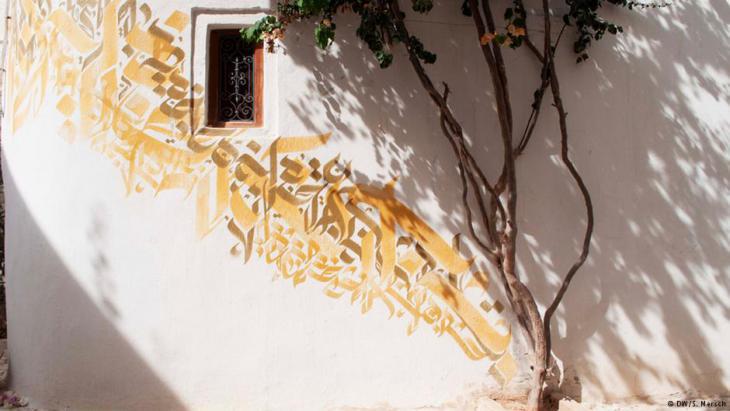 "Before the change, people could only create art commissioned by the government. Nowadays, people create art for the sake of their audiences and for art itself ", says Mohamed Kilani Tbib, who applies his own "calligraffiti" to building facades

The objects he has embellished with his work include an abandoned factory, a plane wreck in a rundown park in the middle of a Tunis suburb and walls in the city centre. His works and those produced by many like-minded artists have become an integral part of the capital's streetscape, often replacing hastily sprayed political slogans. Even mosques have been turned into objects of art – as has a mansion belonging to a family from the former ruling elite.

"Djerbahood," another project, encompasses an entire village. Mehdi Ben Cheikh, a French-Tunisian gallery owner, has transformed the village of Erriadh on the Tunisian island of Djerba into an open air gallery. Artists from 30 countries have been there and left their mark. "At first the residents were suspicious. But after a few days, they all wanted something on the walls of their homes."

"We wanted to highlight the special status of the island of Djerba and show that peaceful co-existence of Jews and Muslims is not a pipe dream, but in fact has been the norm here for centuries," Cheikh explains. The local economy has also profited from the 200 works of art on display in the village. Several new galleries, shops and restaurants have opened since the project began to attract tourists.

Somewhere between the railway station, garages and a large market for smuggled goods in downtown Tunis, Ben Cheikh has opened a second gallery called "32 bis." A striking piece of graffiti more than a metre tall adorns the exterior of the former factory building, located amid dilapidated Art Nouveau houses dating back to the country's colonial period. Cheikh's goal is to turn downtown Tunis into a more dynamic city centre.

"This district doesn't deserve to be in such bad condition! Citizens need to own their city again and appreciate it," he says, adding that if this neighbourhood were located in London or Paris, it would long since have become one of the city's most trendy areas. "The time has come for us to stop throwing away our cultural heritage." 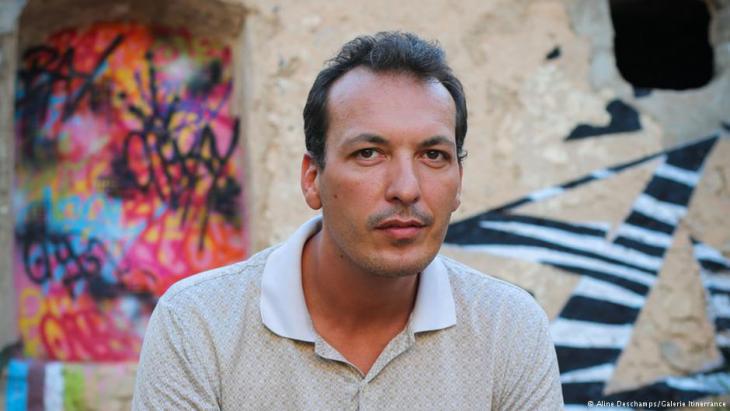 "This district doesn't deserve to be in such bad condition! Citizens need to own their city again and appreciate it," says Mehdi Ben Cheikh, manager of the ″32 bis″ gallery in Tunis

But despite the newly-found freedom enjoyed by these young artists trying to conquer public space to showcase their work, many continue to encounter problems with the authorities. The Inkman recounts that back in May, he had to spend eight hours at a police station "because someone had claimed I was spraying Islamic State propaganda on a wall."

The Inkman had actually sprayed the English word "musk", a traditional Tunisian perfume. The artist has had to come to terms with the fact that, quite often, passers-by have a hard time deciphering his playful approach to letters.

"Most people assume that I produce Arabic calligraphy – whereas in fact, these are Latin characters and I have merely been inspired by the Arabic script." Stressing that he stays away from explicit political messages, the young man says his objective is simply to communicate love and respect for people through his art.

"Creating all this street art is a political act in and of itself; the contents or messages don't need to be," says Mehdi Ben Cheikh, adding that he hopes this kind of political activism continues to flourish. Despite the far-reaching liberties granted by Tunisia's new constitution, many fear a return to repressive measures in response to the ongoing terrorist threat, with hard-fought freedoms curtailed as a result.

Cheikh says it is up to artists and the media to prevent that from happening. The gallery owner explains that while Tunisians are still able to voice criticism publicly, no freedom should be taken for granted. "It is up to us, the people, to make sure that these rights can never be taken away from us again. And it is up to journalists to never remain silent."

Nouara may be 65, but she is ready to join thousands of others who burn their ID and pay traffickers for the chance of a new life in Europe. Zineb Bettayeb reports END_OF_DOCUMENT_TOKEN_TO_BE_REPLACED

In Doha, Arabs from Morocco, Tunisia, Egypt and Algeria are gathering to celebrate the first ever FIFA World Cup to be held on Arab soil. The criticism from Europe? Over the top, ... END_OF_DOCUMENT_TOKEN_TO_BE_REPLACED

After a two-year hiatus, the Arab League re-convened at the beginning of November in Algiers against a backdrop of uncertainty and discord. By Pierre Boussel END_OF_DOCUMENT_TOKEN_TO_BE_REPLACED

In the run-up to the COP27 global climate summit, hosted by Egypt in November, it is worth noting that little rainfall, aggressive heatwaves and worsening drought make the Middle ... END_OF_DOCUMENT_TOKEN_TO_BE_REPLACED

Tunisia's economic and political instability and the increasing reluctance of Europe to take in job-seeking migrants is leading many Tunisians to head for sub-Saharan Africa in ... END_OF_DOCUMENT_TOKEN_TO_BE_REPLACED
Author:
Sarah Mersch
Date:
Mail:
Send via mail

END_OF_DOCUMENT_TOKEN_TO_BE_REPLACED
Social media
and networks
Subscribe to our
newsletter