Iran's artists made good use of the brief period of opening under the liberal President Khatami. However, the Islamic Republic's increasingly rigid cultural policy is now threatening to wipe out all they achieved at the time. By Alessandro Topa and Roshanak Zangeneh

​​ Under the reformer Khatami, Tehran's arts scene became a symbol of an Iran that was open to the world. While exhibitions such as "Far Near Distance" in Berlin or "Iran.com" in Freiburg, Germany, introduced Iranian artists to an interested European audience, the boom in Islamic art pushed the prices of their work to dizzying heights in Dubai, London and New York.

All this may well change in future – not because of the financial crisis, but because artistic reflection of reality is increasingly a thorn in the side of the country's radical Islamists.

Intervention at every turn

Mahe Mehr is one of several private art schools in the North of Tehran. The mainly young women and the handful of men who frequent these institutions are interested in art regardless of the turbulent market. They come to the small academy to improve their drawing and painting skills or take seminars in analysis and critique of artworks. The lectures on art history are also well attended, as this mother of all methodical approaches to art is rarely taught at Iranian universities.

One of the key factors behind the school's good reputation is the highly qualified lecturers, many of whom gained their doctorates in Europe or the USA.

​​50-year-old Hamid Severi, for instance, studied art history at the University of California, Santa Barbara, taught at Iranian universities and went on to run the research department of the Tehran Museum of Contemporary Art (TMCA). Until recently that is, as Severi handed in his notice in the spring of 2008.

The cosmopolitan art historian prefers to teach at private art schools such as Mahe Mehr or translate literature from his field rather than working for state institutions any longer. "There are no significant art institutions left in Iran that can work without state intervention in artistic matters," he says. These institutions, Severi maintains, can therefore no longer do what is necessary for the development of Iranian art. The meagre state funding is also restricted entirely to works that transport the regime's ideology, he adds.

In cultural life this means that the Tehran Symphony Orchestra recently performed religious compositions that ended with the return of the Twelfth Imam, while at the TMCA the fine strokes of calligraphy are said to adhere to a divine dictatorship – exhibited alongside works of Kandinsky and Picasso, Giacometti and Magritte, Pollock and Lichtenstein; twentieth century masterpieces with an anarchic power of abstraction and critical self-reflection of the modernist aesthetic.

A very literal way of linking art and modernity

An exhibition of partly centuries-old calligraphy in the Nastaliq style in the contemporary art museum was followed by a show of calligraphic typographies by young graphic artists. "Historically, the art of writing the word of God beautifully is highly important in Islam," Severi explains. "And I find the question of whether and how we can understand calligraphy as a modern art form important. But declaring it contemporary art just because calligraphy still exists today reveals a very literal way of linking art and modernity, doesn't it?" is Severi's rhetorical question.

​​ The museum, which still houses the most outstanding collection of modern art in the whole of Asia and functioned as a lively centre of the Iranian art scene at the turn of the century, is now run by Mahmoud Shaluie, an obedient servant to Ahmadinejad's principles. His previous field was Islamic mysticism rather than contemporary art, as Hamid Severi points out.

"There are no conferences or lectures any more, let alone new exhibitions of modern art." And the museum's dialogue with other countries has come to a standstill, the former department head complains. Resignation, he says, is widespread, especially as Iran's recently awakened awareness of the importance of art is now fading away again.

Soon after assuming office, the museum's new director announced he would be putting a stop to exhibitions of modern art for the time being. Shaluie even called off the planned restoration of the "Flute Player", an important statue by the Iranian sculptor Bahman Mohasses.

The four-metre sculpture, which stood outside Tehran's city theatre before the revolution, was found in the theatre's property room, where it had presumably spent the years from 1979 to its discovery in 2007 – minus its flute and with one arm broken off. Now it languishes unrestored at the TMCA, which is gradually becoming a graveyard for modern art. 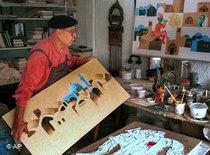 Due to the ideologically motivated cultural politics of the Ahmadinejad administration, only a handful of artists now have the chance to raise their international profiles

​​ During the reform-oriented President Khatami's time in office, the TMCA was still a number-one address for trend scouts and curators hunting for artists and work in Tehran. The positive side was that it enabled a close network to form around the museum. The negative was that this gave only a handful of artists the chance to raise their international profiles.

The scene was like an old boys' network, recalls the gallery owner and artist Rosita Sharaf-Jahan. The fact that the TMCA has lost its position as hub of that network, she says, means the state has unwittingly provided a positive impulse for Tehran's many small galleries. "The scene is on the move again," Sharaf-Jahan comments: "Curators, collectors and dealers are now making direct contact to galleries and artists."

When it comes to artistic freedom, however, the development is far from rosy: whereas every gallery could choose who and what to exhibit under the reformers, now every item has to be viewed and authorised by the Ershad Ministry of Culture and Islamic Guidance. Gallery owners now also have to renew their permits, once issued on a permanent basis, once a year.

The figure behind the new strict application of these regulations is none other than Mahmoud Shaluie, not only the director of the TMCA, but also head of the visual art department in the Ershad ministry.

At first glance, all these regulations require is for galleries to photograph each work before an exhibition and send the pictures and a résumé of the artist's work to the ministry. But Rosita Sharaf-Jahan has already had a taste of the practices and effects of the intensifying state control, when summoned to the culture ministry. "On the occasion of an upcoming exhibition I was asked what my pictures meant and why they were so hard and aggressive." The artist answered confidently that her pictures were not in favour of but against violence. "Then they started to ask deliberately ambiguous questions about what violence I meant."

Sharaf-Jahan is a mature 46-year-old woman, but admits that she was very scared and gave a secret sigh of relief when the officials switched to simply giving her advice. "They told me to take inspiration from the beauty of the mosques in Isfahan. To try and motivate people positively through my work, as beauty inspires people to higher things. I just nodded." Rosita Sharaf-Jahan's exhibition was eventually allowed to take place. Yet it remains to be seen whether she will be able to resist self-censorship in the long term.

New Exhibition of Contemporary Art in Tehran
Unusual Images for the Islamic Republic
For years they wasted away in the basement of the Tehran Museum for Contemporary Art. The paintings of well-known artists of the twentieth century had long ago been deemed "Western works of the devil" by the Mullahs. Now they have been recovered from their hiding place and put on display at the museum. Martin Ebbing reports from Tehran

END_OF_DOCUMENT_TOKEN_TO_BE_REPLACED
Social media
and networks
Subscribe to our
newsletter