A Visual Language of Migration

Immigrants themselves, they now devote their time to giving a voice to fellow immigrants. The artists' collective group Migrantas takes drawings and turns them into compelling pictograms. Nimet Seker sketches a portrait of the group

Immigrants themselves, they now devote their time to giving a voice to fellow immigrants. The artists' collective group Migrantas takes drawings and turns them into compelling pictograms. Nimet Seker sketches a portrait of the group

​​Three posters stand side by side in the Kreuzberg area of Berlin. One pink, one blue, one yellow. On the first, two figures stand face-to-face. One poses the question: "Are we different?"

The second shows a solitary figure, who, with lowered head surveys her rounded belly. The line beneath reads: "Where will it belong to?" The third poster represents a figure standing astride a globe, the legs planted in two continents, the heart broken in two.

In Hamburg an advertising pillar displays a pictogram of a female figure. Wearing a blue headscarf and smiling, she embraces the city of Hamburg's coat of arms. Under her, the single word "Zuhause" (home).

The pictograms speak a direct and simple language with a clear, universal and powerful message. They are similar to the kind of pictograms one finds in public spaces, such as airports, all over the world. They are the work of the Berlin artists' collective Migrantas.

"The pictograms are a synthesis. They tell a story," says Marula Di Como. The artist from Argentina has been living in Berlin since 2002. She devised the pictograms as part of her own distinctive artistic language.

Working together with graphic designer Florencia Young, her first project involved the conception and design of "Proyecto Ausländer", which included an urban action in Buenos Aires, and dealt with the subject of being a stranger in a foreign land.

In 2004 they joined forces with the sociologist Estela Schindel, also from Argentina, who has lived in Berlin for some years, and the Migrantas collective was born. Irma Leinauer subsequently became project coordinator and with the addition of Argentinian journalist Alejandra López, Migrantas reached its full complement of five women.

Migrantas reflects upon the living conditions of immigrants in Germany. "The objective of Migrantas is to give a public voice to the thoughts and opinions of all immigrants," Florencia Young explains. One way of doing this is to get immigrants involved in workshops.

These provide an opportunity for participants to reflect upon their own situations and experiences as immigrants. Discussions are followed by sessions where the participants make drawings inspired by their experiences and emotions. The drawings then provide the basis for the pictograms.

Marula Di Como shows one of the drawings. It depicts a figure with a triangle on its head. Alongside, a dove of peace and a peace symbol. "Not a terrorist: we also want to live in peace," are the words written underneath. The sketch became a pictogram showing a figure with a blue headscarf and red smiling mouth: "Not a terrorist"

​​"When we saw the sketch we thought it was just amazing. It is a drawing that represents the feelings of all these women. It was immediately clear to us what the pictogram would look like," Di Como recalls.

The artists' create a synthesis of the drawing and the women's words, but is there not some interpretation involved here? "The woman herself put it this way: 'The headscarf makes me a terrorist, I am the other, I am completely bad, I am the enemy. What I want to say with my drawing is that these things are not what I am,'" says Di Como. "In this case she wrote it down herself, she was quite clear about it. What we did was to create the synthesis."

Part of the urban landscape

The pictograms graphically and concisely sum up what the women feel and experience. They make a direct statement, speak a clear, unambiguous language.

They are displayed in urban areas on posters, free postcards, at bus stops and in digital animations on screens in subway stations. Migrantas try to ensure maximum visibility for their images in public spaces.

"It is important to us that the participants are present when the pictograms are put on display, so that they can see their own work. It is a very important day for the women. They are the protagonists. Their voices are being heard, receiving recognition," Florencia Young explains. 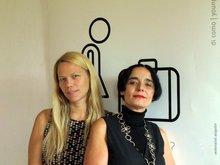 The members of Migrantas have themselves emigrated from Buenos Aires to Berlin. They conceive of their work with other migrants as a horizontal dialogue: Artists Florencia Young (left) und Marula di Como (right)

​​With "Proyecto Ausländer", Di Como and Young began by expressing their own feelings of alienation in Germany. Through Migrantas the voices of the immigrants become pluralized: "We, as artists, cannot say everything. We must allow the immigrants to speak for themselves. We created the project, but there are only a few of us. When many women's voices come together, the impact is greater," says Young.

Personal contact and exchange of ideas in horizontal dialogue between artists' and workshop participants is important. "There are no barriers between the personal and the professional. We see and hear things that are just incredible. When I listen to some of the Kurdish women, for example, I realise that I don't have any problems," adds Di Como.

"We, the immigrants, are always the others. This is not just so in Germany or in Europe. It is a universal phenomenon," she continues.

At home in Berlin

Coming from Argentina, which itself received many immigrants in the 1920s, both artists are well aware of the feelings that immigrants experience. One side of Di Como's family is from Spain, the other from Italy.

Florencia Young's family, on the other hand, has its roots in Ireland, though her mother is Italian-Spanish. "We live in Germany now. My son's German is better than his Spanish. Berlin is our home," she says. "I think one always feels foreign, because one does not belong 100 per cent here. I came here when I was 37. I lived a different life somewhere else – 37 years long. That leaves its mark, of course, but now I live here and I concentrate on the positives, not the negatives. There are good and bad things about every country, it doesn't do any good to find fault."

This article was published in cooperation with the Online-Magazine babelmed.net, "Meeting the Other". For more information about the project click here.