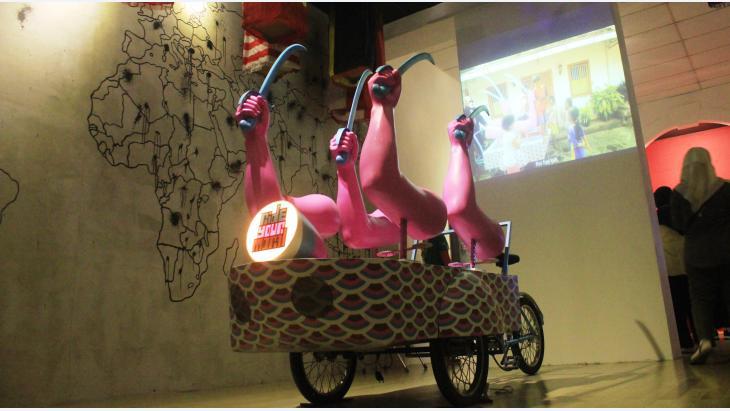 This year's eighth "Artjog" art exhibition in the Indonesian city of Yogyakarta featured 103 works by 87 artists from 11 countries. Its theme, "Infinity in Flux", paid homage to the Fluxus movement of the 1960s, a movement dedicated to removing the boundaries between artistic disciplines, as well as those between works of art and their audiences. By Christina Schott

The evening of 6 June 2015 saw a crowd of around 20,000 people gathered in front of the cultural centre in the Indonesian city of Yogyakarta. It was no famous pop star or important politician they were there to see, however. No, they were prepared to stand for hours in front of a gigantic steel ball planted with greenery for the chance of having a look at the country's largest contemporary art exhibition.

"Infinity in Flux" was the theme of this year's exhibition. The Fluxus artists included such luminaries as Joseph Beuys and Christo among their number, as well as Yoko Ono, whose work, including some of her "Imagine Peace" artefacts, received a special presentation at this year's "Artjog".

Her celebrated "Wish Tree" awaits visitors just inside the irrigated green exhibition entrance dome created by the Indonesian artist duo "Indieguerillas". Everyone, from young girls in school uniforms to elderly visitors, is keen to squeeze their way in, write their hopes and wishes on pieces of paper and hang them on the tree – so many in fact, that two large sacks full of notes have to be taken away every evening.

In line with this year's theme, most of the works on display are interdisciplinary and multimedia in nature – many of them include interactive elements. The "Choir of Chaos" by Eko Nugroho, for example, which features a kind of bicycle-powered carousel with seating for four children. But instead of the usual colourful animal figures typical of village carousels, its seats take the form of severed arms, each of which brandishes a sabre. 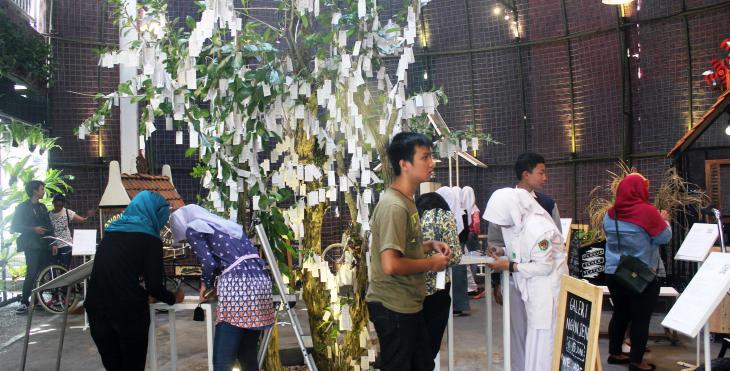 "Ride on your morals"

In the accompanying video, the driver of this bright pink and light blue painted contraption sports a white horror mask – a fact that does not deter the children from waving cheerily to the camera. "Ride on your morals" reads the motto adorning this grisly children's ride. The exhibition room is hung with bird cages draped in ink-stained national flags from around the world. The Choir of Chaos arises when all countries of the world loudly cry "war, racism and fear", while at the same time manoeuvring to achieve the greatest share of attention and thus the best position, is the artist's explanation.

The "Prison Art Programs" collective exhibit "Atas Nama Daun" (In the name of the leaf) deals with a highly controversial topic in Indonesia. The white room full of dried leaves mounted behind glass initially seems harmless … except, that is, for the checkpoint at the entrance. "What's it supposed to mean?" a young girl in stretch jeans and fashionable headscarf asks, looking around the room full of curiosity. "We like leaves", explains a man in a lab coat. "Especially hemp leaves. We are showing them as normal parts of plants, not dangerous chemical drugs from the laboratory."

The young woman shoots the neatly dressed hemp-lover a surprised look: "Were you ...?" she begins. He reveals with a grin that he has spent time in prison for taking hash, which is a crime in Indonesia. He has given up, in the meantime, he adds, for his own safety, but doesn't feel he has done anything wrong. And, while he doesn't approve of other drugs, he is absolutely opposed to the death penalty which the Indonesian government is again using so brutally against drug traffickers. "How exciting," says the young woman, before moving on. 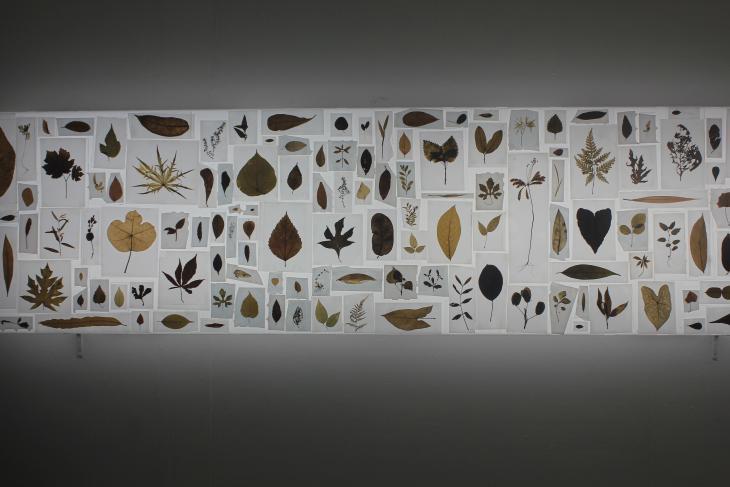 "We like leaves, especially hemp leaves...": a highly controversial topic in Indonesia was brought into focus by "Atas Nama Daun" (In the name of the leaf) by the "Prison Art Programs" collective. The white room full of dried leaves behind glass appears harmless … but only at first glance

A socio-critical and highly professional exhibition

"I like the message to be direct: it's the only way to get it across to a lot of people. Anyone who doesn't have a selfie on Facebook, Instagram or other social media is behind the times. But visitors to the exhibition always take something away with them – there are many rewarding moments, sudden insights into what may be art – a video game for example, or household articles."

Or construction equipment: installation artist Eddi Prabandono's work "Membangun Pangan" (building food) shows a concrete mixer surrounded by dozens of plates on which young rice plants are growing. A digital display on the wall encourages visitors to call a mobile phone number – in the case of a missed call, the concrete mixer roars into action. Its message is a pretty clear indictment of the corrupt construction industry and the building mania that has seen countless acres of cultivable land around Yogyakarta swallowed up by hotels and residential developments while the wells of local residents have been drying up.

The "Artjog" was not always as socially critical or as highly professional as it is today. Founder Henri Pemad put the first "Jogja Art Fair" together in July of 2008 as part of the city's cultural festival. At that time, anyone who wanted to could take part. The fair had no clear concept, and tended to attract a lot of criticism. "What I wanted to do was to give an opportunity to those artists and their works that had not been exhibited in galleries before. Our country does not have the infrastructure for such things, and the government provides no support at all," the arts manager explains. "I realised very quickly, however, that we would have to be selective, so in 2009 we had our first curated Art Fair. It was renamed 'Artjog' in 2010."

The commercial character of the art fair does not worry Pemad at all. Once an art student himself, he sees the fact that transactions are made directly with artists rather than via agents and gallery owners as a positive thing. Bambang Witjaksono, who has curated the "Artjog" on four occasions, sees an opportunity in the professional financial management of an exhibition space, one which in terms of use of space and technical equipment is unrivalled in their country. 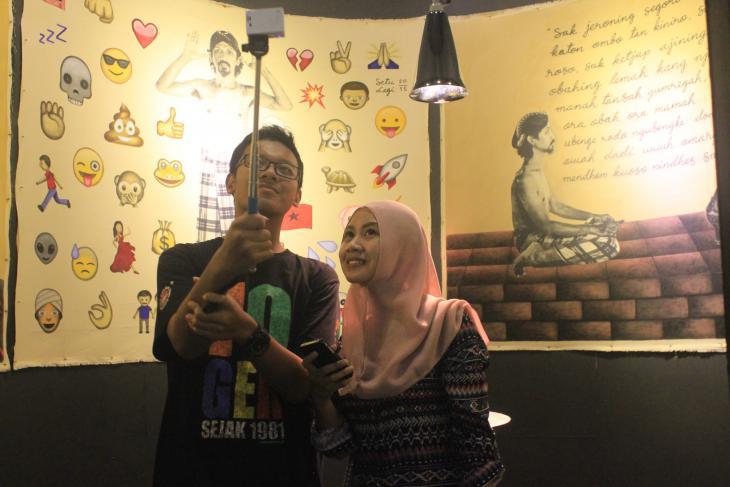 Despite the high price of tickets, "Artjog" 2015 was a success. About 20,000 people attended the opening day and since then, between 1,500 and 2,000 visitors have come on weekdays. Pictured here: two students taking a selfie in front of "The Chorus Offering Compliments" by Setulegi

Grabbing the attention of international curators

This, he believes, is something that has attracted the attention of international curators and collectors and thus boosted sales prospects. So far, however, there has been very little in the way of official recognition: "Every year, we invite all the top local government representatives, but so far, no one has come," says Witjaksono.

Criticism from within the art scene has also persisted. The entrance fee, equivalent to €3.30, which is very expensive in Indonesian terms, has been the main bone of contention. "Visitors have to understand that art has its price," says organiser Heri Pemad. "We actually give visitors something for their money: a major event that has every bit as much entertainment value as a visit to the theatre."

It does indeed appear that most visitors are not put off by the price: even on weekdays, the exhibition attracts between 1,500 and 2,000 visitors. High school students Zaki and Sina have already been here twice. "Yes, it is expensive, but when we come here we stay longer than we would at a movie for example, and that would cost just as much," says 17-year-old Sina.

Just like her boyfriend, who is the same age, she hopes to study medicine. She discovered her interest in art at the last "Artjog" and was surprised by how many ideas it gave her. The couple are standing admiring a mixed media work, "The Chorus Offering Compliments", by Setulegi. It consists of four pictures arranged in a circular space, each one depicting the artist in different stages of Islamic prayer. He is naked from the waist up and wearing a traditional Javanese head dress. In one picture, he is hanging his head while facing into the smoke of an erupting volcano, in another he is kneeling before the stumps of felled trees.

However, the two students are most impressed by the part in which the praying artist is depicted surrounded by countless digital app icons. "It makes me think," says the young Muslim girl. "He is praying to Allah, yet his mind seems to be fixated on digital communication". No sooner has she said this than she fixes her smartphone to its selfie stick and positions herself and her boyfriend in front of the picture. Digital immortality: the Fluxus movement would have approved.

Sufis today are under attack from fundamentalists and modernists alike. At the same time, a new form of Sufism is emerging in the West. By Marian Brehmer END_OF_DOCUMENT_TOKEN_TO_BE_REPLACED

We are in favour of human rights. But One Love armbands are self-righteous and ignore some fundamental issues. Stefan Buchen examines the debate surrounding the World Cup in Qatar END_OF_DOCUMENT_TOKEN_TO_BE_REPLACED

With its traditions of neutrality and non-alignment, Indonesia has had to tiptoe around the Ukraine war debate. Pro-Russia sentiment in the region complicates Jakarta's foreign ... END_OF_DOCUMENT_TOKEN_TO_BE_REPLACED

Calls for an environmentally-conscious form of Islam are growing in Indonesia, as climate change poses enormous ecological challenges for the country. Experts say it could change ... END_OF_DOCUMENT_TOKEN_TO_BE_REPLACED

Indonesia has become a primary battleground between democratic and autocratic visions of Islam in the 21st century, with Nahdlatul Ulama pitted against Abdullah bin Bayyah, a ... END_OF_DOCUMENT_TOKEN_TO_BE_REPLACED
Author:
Christina Schott
Date:
Mail:
Send via mail

END_OF_DOCUMENT_TOKEN_TO_BE_REPLACED
Social media
and networks
Subscribe to our
newsletter