Who Knows the Truth?

For years, Iranian films have been regarded as a hot tip at the Berlin International Film Festival. This time as well, an Iranian production has managed to convince the Berlinale jury. Asghar Farhadi's gripping social drama "About Elly" was awarded the Silver Bear for best director. By Ariana Mirza 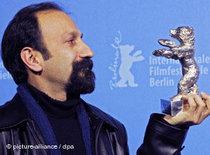 ​​ "About Elly" is a guessing game of suspicion and slander brilliantly orchestrated by Ashgar Farhadi. The story begins as harmless as it is hopeful. A group of old university friends from Tehran set off with their families for a weekend seaside excursion.

Along with the group are two singles. Ahmad, who lives in Europe, has just gone through a divorce with a German woman and is now looking for an Iranian wife.

All the group knows about the 20-something Elly is that she works as a nursery school teacher. The young woman was invited at the spur of the moment by the bustling Sepideh, who would like to pair up the loving guardian of her children with Ahmad.

A break with the truth

The story begins rather unspectacularly and in a realistic vein, but soon develops dramatically as the protagonists gradually lose their personal integrity. One after another, they become entangled in a web of conjecture and self-justification until they transgress the border from truth into outright lie.

​​ The energetic Sepideh follows the rest of the small group along this same path. Yet, for her as well, this break with the truth leads to a loss of joy and self-respect.

Despite all the social references to the situation in Iran, Farhadi's film possesses a universal dimension. "I show how people behave in a difficult situation," says the 36-year-old director, who also wrote the screenplay for "About Elly". "The story could take place somewhere else, but not at a different time."

The setting of the story in the present, which Farhadi regards as a vital element of the film, is also reflected in the bold, modern production. The film radically denies the viewer access to more information than the protagonists have at any given time.

Finally, the puzzle of the tragedy – what actually took place – is not revealed. This blank space is left for the viewers to fill in for themselves, just as it is for the film's characters, who find themselves backed up against a wall.

Asghar Farhadi: "The task of cinema is to constantly introduce change and thereby change us!"

​​ "Cinema audiences today are no longer just passive consumers, but rather demand the freedom to develop their own interpretations," says Asghar Farhadi. According to the director, it is not the job of the filmmaker to disseminate simplistic messages or to force an audience to accept his or her particular interpretation of things. "I purposely tell only half the story. The other half takes form in the minds of the viewers."

"About Elly" was awarded, however, not only because of the director's intellectual approach. In this his fourth feature film, Farhadi once again displayed his virtuosity in the medium of cinema. He is able to portray complex characters with just a few strokes and create a build-up of tension that grips his audiences.

The outstanding camera work by Hossein Jafarian combines impressive metaphorical images with an almost documentary-like proximity to the events portrayed. And Farhadi also shows his talent at picking the right actors.

Golshifteh Farahani puts in a top performance in the role of Sepideh, while the whole ensemble shines through their restrained yet intensive acting.

The winning of the Silver Bear increases the chances that "About Elly" will soon be released worldwide. The film also proved to be a hit with the public at the Fajr Film Festival in Iran, which took place simultaneously with the Berlinale.

Farhadi hopes that "Darbareye Elly," as the film is called in Iranian, will have a run at the theatres in Iran this year. To date, there have been no objections from the censorship authorities, so the odds are good that the film, which was privately financed with a mini-budget of 350,000 euros, can recoup its production costs.

Farhadi could certainly use the money, as he is already busy with his next film projects.

Cinema in Iran
The Calm before the Storm?
It's not that long since Iranian cinema was famous for its innovation, winning international prizes across the board. But now the buzz about the Iranian film industry has died down, both in the West and in the Islamic Republic itself. Amin Farzanefar considers the state of Iranian film past and present

Dossier
Iranian Cinema
Iran's film culture has been transformed since the Islamic revolution: from the state propaganda films to today's socially critical productions. We take a look at the various facets and examine its resonance in the West

The Islamic Republic has a strict and often arbitrary system of censoring artistic and journalistic works. An in-depth investigation by writer Alireza Abiz uncovers the details ... END_OF_DOCUMENT_TOKEN_TO_BE_REPLACED

Presenting a more nuanced vision of their common homeland, Iran, to Western imaginations, kindred spirits Omar Khayyam and Maryam Mirzakhani stand out against the twenty-first ... END_OF_DOCUMENT_TOKEN_TO_BE_REPLACED

Iran is far more modern than many people realise: our view is clouded by media distortion and the overriding political narrative. The nation’s historic and cultural riches are ... END_OF_DOCUMENT_TOKEN_TO_BE_REPLACED

In August 1978, four men set fire to the Cinema Rex in the Iranian city of Abadan, killing more than four hundred people inside. The event is said to have started the Iranian ... END_OF_DOCUMENT_TOKEN_TO_BE_REPLACED

Iranian director Manijeh Hekmat expected the production of her latest movie to go ahead as planned – but then she found herself having to improvise. The resulting film is more ... END_OF_DOCUMENT_TOKEN_TO_BE_REPLACED

Mohammad Rasoulof's "There Is No Evil" won the main prize at the Berlinale. Maryam Mirza talked to the director, who is currently forbidden from leaving Iran, about his film END_OF_DOCUMENT_TOKEN_TO_BE_REPLACED
Date:
Mail:
Send via mail

END_OF_DOCUMENT_TOKEN_TO_BE_REPLACED
Social media
and networks
Subscribe to our
newsletter