Revolutionary "Charter of the Social Contract"

The internal uprising against Assad’s regime in 2011 gave the Kurds their opportunity.  As the civil war inside Syria descended into a maelstrom of separate conflicts, up in the north the Syrian Kurds were battling and defeating the IS, successfully winning back large areas of Kurd-inhabited territory.

Today the Kurdish-occupied region is ruled under a federal and democratic constitution – the "Charter of the Social Contract" − which provides for all citizens to enjoy gender equality, freedom of religion and property rights. In a poll organised in September 2017 voters elected leaders for about 3,700 "communes" spread across the regions of northern Syria where Kurdish groups have established autonomous rule.

Although the Syrian government has not formally recognised the DFNS or the validity of its elections, Assad has clearly perceived the advantages he could gain from coming to an accommodation with his Kurds. Last September Walid Muallem, Syria’s foreign minister, said that his country was open to the idea of greater powers for the country’s Kurds.

They "want a form of autonomy within the framework of the borders of the state, " he said. "This is negotiable and can be the subject of dialogue." He indicated – presumably with the acquiescence of Russia – that discussions could begin once the civil conflict had ended. The SDC delegation to Damascus may be the start of that process.

Raising the stakes with Turkey

This change of tactic on the part of the Syrian government is anathema to Erdogan. The degree of autonomy that Syria’s Kurds seem likely to attain can only reinforce the Kurds in Turkey in their separatist demands. This explains Erdogan’s incursion in January 2018 into the region around Afrin and the Kurds’ willingness to join with Assad’s forces in helping chase Turkish forces out of Syria.

A Kurdish legislator, Omar Usi, who sits in the national parliament in Damascus, recently said the government wanted the Kurds to "facilitate the entry of the Syrian army and the return of state institutions into Kurdish-majority areas east of the Euphrates." In return, it was offering "constitutional recognition for the Kurdish community and its cultural rights."

Would this be sufficient to satisfy Kurdish aspirations? Under the "Charter of the Social Contract" the Rojava administration has implemented much of the liberal left-wing ideology of its main Kurdish component, the YPG (People’s Protection Units), including strict equality for women in all public offices. The Kurdish flag and images of jailed PKK leader Abdullah Ocalan (or "Apo", that is, "uncle") are ubiquitous. But Apo has been confined to the infamous Imrali Island prison by Turkey’s Erdogan, Assad’s sworn enemy. With a shared enemy and perceived advantages from co-operation, the outcome of the current negotiations could well be a continued Assad presidency, sustained by Kurdish support.

Neville Teller is Middle East correspondent for the Eurasia Review and his articles also appear regularly in other publications and in his blog "A Mid-East Journal".

Since Ali Khamenei, Iran's most powerful man, has openly and unconditionally come out in support of Putin's war in Ukraine, logistical help is on its way, with an allegedly ... END_OF_DOCUMENT_TOKEN_TO_BE_REPLACED

Tourists have been returning to Tunisia, Egypt and Morocco. But, given the global uncertainty caused by the Ukraine war, will the comeback be enough to save a struggling sector, ... END_OF_DOCUMENT_TOKEN_TO_BE_REPLACED

With its traditions of neutrality and non-alignment, Indonesia has had to tiptoe around the Ukraine war debate. Pro-Russia sentiment in the region complicates Jakarta's foreign ... END_OF_DOCUMENT_TOKEN_TO_BE_REPLACED

Foresight is needed to turn the tide of German policy. Being independent of Russia must not lead to dependence on authoritarian regimes in the Middle East. By Kristin Helberg END_OF_DOCUMENT_TOKEN_TO_BE_REPLACED 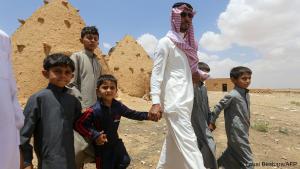 Family members from three generations were planning to sample the long-forgotten peacetime pleasure of a simple family picnic in Syria when a landmine brought a bloody end to ... END_OF_DOCUMENT_TOKEN_TO_BE_REPLACED

Although many Arabs express sympathy for the Ukrainian people, social media reveals a current of support for Russian President Vladimir Putin that is rooted in polarisation, ... END_OF_DOCUMENT_TOKEN_TO_BE_REPLACED
Author:
Neville Teller
Date:
Mail:
Send via mail

END_OF_DOCUMENT_TOKEN_TO_BE_REPLACED
Social media
and networks
Subscribe to our
newsletter