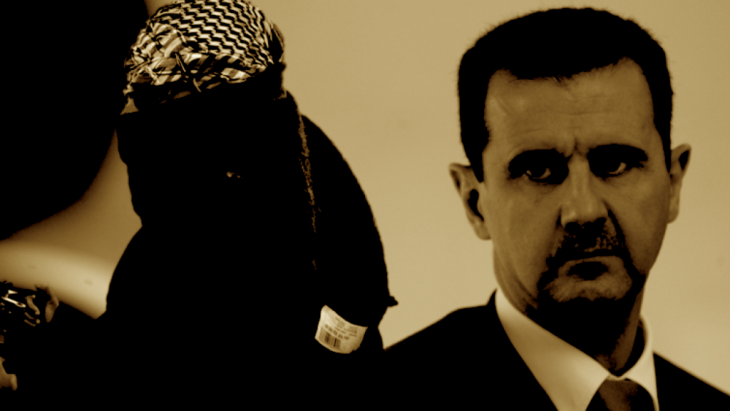 Assad and the rise of IS
My enemy's enemy

Willing to co-operate with terrorists as and when it suits him, Assad has intentionally shaped the course of the Syrian conflict. Nor does IS have the monopoly on committing atrocities against civilians, as the regime's repeated use of chemical weapons, most recently near Idlib, reveals. By Hakim Khatib

Finding a link between Bashar Assad′s regime and the rise of the so-called Islamic State will not come as a surprise to many Syrians. Unlike the image the regime has been trying to sell to world media that Assad is fighting IS, there is well-documented evidence of the Assad dictatorship′s contributions to the IS tale of terror.

Both the former Iraqi Prime Minister Nouri al-Maliki and Assad released al-Qaida-affiliated prisoners in 2011 in their respective countries, which proved instrumental in the rise of IS. So far, research has shown that the release of jihadist extremists was accompanied by an increase in the number of activist arrests, a low level of military engagement between the regime and IS, ongoing economic relations between the regime and IS, not to mention an uninterrupted link to jihadists in Iraq.

″We are practical and not theoretical,″ said General Ali Mamlouk, Assad′s special intelligence advisor and one of the regime′s most repressive characters before and after the outbreak of the Syrian uprising, to US officials in 2010. Proud of the regime′s success in penetrating terrorist groups, he said: ″In principle, we don′t attack or kill them [terrorists] immediately. Instead, we embed ourselves in them and only at the opportune moment do we move.″

When the Syrian uprising began in mid-March 2011, the Assad regime strategically released hundreds of radical jihadists from prison two months later. At least 260 prisoners were released from Saydnaya military prison in north Damascus, of whom only 14 were members of Kurdish entities and the rest were hard-core Islamists.

By the end of 2011, more than 1,000 former al-Qaida militants were freed to strengthen jihadist ranks at the expense of moderate rebel forces. These went on to play major roles in IS, al-Nusra and other extremist groups. Such a move aimed at radicalising and discrediting the uprising across the country.

"Me or the terrorists"

The regime not only released jihadists from prison, but also facilitated their work in creating armed brigades. Based on several exclusive interviews and investigations with defectors, Assad intelligence received orders to stand down when al-Qaida fighters crossed from Iraq into Syria in late 2012.

Some of the most prominent names freed at the time included Abu Khaled Al-Souri (al-Qaida), Hassan Aboud (Ahrar Al-Sham), Zahran Alloush (Jaish Al-Islam) and Amr Al-Absi (IS). By 2012 it was estimated that IS had almost doubled its previous numbers to 2,500 fighters in Iraq. This played into Assad′s hands, persuading the West that the uprising was sponsored by Islamist militants and framing the nationwide insurrection in 2011 against him as a terrorist-led revolt. He alleged that those leading the revolution across Syria were no more than armed terrorists, in an attempt to send a message to the world: ″either me or the terrorists.″ 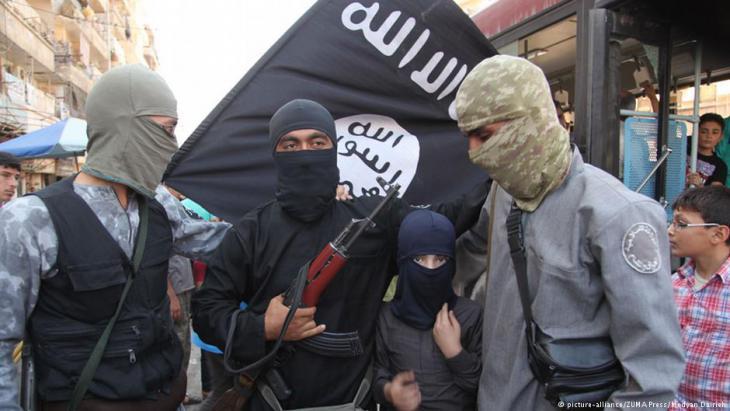 Shoring up his own position: ″by the end of that year, more than 1,000 former al-Qaida militants were freed to strengthen jihadist ranks at the expense of moderate rebel forces. These went on to play major roles in IS, al-Nusra and other extremist groups. Such a move aimed at radicalising and discrediting the uprising across the country," writes Khatib

At the same time, thousands of civilians and liberal civic activists were driven into prisons, beaten, tortured, terrorised and traumatised, while millions, including many human rights activists, were forced to flee their homes seeking refuge inside or outside the country.

The Assad regime imprisoned thousands of civilians and protestors, staged concocted attacks against governmental facilities in 2011 and 2012, even before IS was present in Syria, as well as commissioning fake trials to convict protesters of terrorism. Thus while playing with reality to match the regime′s propaganda, Assad claimed to be the victim of jihadist extremism. Controversially notorious, these same prisoners – regardless of the accusations directed against them – were partially released having paid bribes to governmental officials.

The Syrian security forces and lawless secret police (Shabbiha) confronted peaceful protests with utter brutality and killed hundreds of civilians in the first few weeks, triggering the beginning of an increasingly bloody spiral of violence. For fear of imprisonment, torture, or murder, any form of opposition therefore had to be practised from abroad.

These atrocious actions coincided with the regime′s rare attempts to engage the IS militants in combat. According to senior defence intelligence officer Jeffrey White at The Washington Institute, the regime ″fights IS where and when important regime interests are at stake. When such interests are not at stake, the regime is content for IS to fight the rebels without interference and even to tacitly assist the group.″

″In the Syrian war, the regime is completely pragmatic regarding whom to fight with or against, as well as where and when to fight.″ While the regime remains an unreliable ally in combatting IS, it is more likely to be ″putting only limited effort into the fight while putting its own interests first, including co-operating with IS when deemed expedient,″ added White. 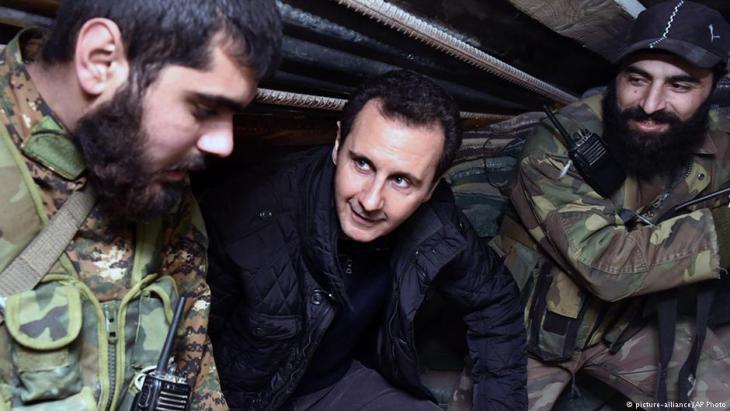 Playing a double game with radical Islamists: the fact that Assad regime has targeted its military operations against moderate and secular opposition groups while barely attacking IS indicates that this opposition is considered to be much more of a threat to the regime than IS

The fact that Assad regime has targeted its military operations against ″moderate and secular opposition groups″ while barely attacking IS indicates that this opposition is ″considered to be much more of a threat to the regime than IS″, according to the PAX policy report published in 2015. The Assad regime hasn′t only turned the other way when IS militants were thriving, but also co-operated with them out of necessity by purchasing fuel from IS-controlled oil facilities, thus maintaining an economic relationship with IS throughout the conflict.

Opening the door to terrorists

But this is not the whole story. The Assad regime has a long history of co-operation with radical Islamists, consistently playing a double game with the terrorists. This relationship dates back to 2003 when it supported and facilitated the formation and the flow of jihadist resistance into Iraq to fight against the U.S. invasion.

According to the Sinjar Records discovered by US forces in 2008 and published by the Combatting Terrorism Centre, 606 fighters from different countries crossed into Iraq from Syria between August 2006 and August 2007. The actual number of those who crossed into Iraq via Syria is likely to be much higher, but this is a documented study based on evidence that focuses on a specific timeframe and a specific crossing point. The Assad intelligence was fully aware of foreign al-Qaida volunteers entering Iraq via Syria.

″The history of the Syrian government′s relationship with alien Islamist militants is long and complicated, ranging from open support to brutal suppression of jihadi activists operating within its borders,″ stated the report in 2008. These reports are just more headings in a long documentation process, which indicates that the Assad regime gave the green light to militant groups in Syria to form and flourish.

The Assad regime ″opened the door to terrorists in order to put pressure on the American troops in Iraq so they wouldn′t even think of war [against Syria],″ said the president of the Kurdistan Regional Government Massoud Barzani in an interview.

The regime conducts its policies in regard to IS based on a pragmatic approach that serves its interests to further its political aims and consolidate its power structures. Thus, through a relationship of co-ordination – which implies conflict – and co-operation, which implies coalition, both the Assad regime and IS have been ready to commit atrocities against each other and against civilians alike.

Hakim Khatib is a political scientist and analyst works as a lecturer for politics and culture of the Middle East, intercultural communication and journalism at Fulda University of Applied Sciences and Phillips University Marburg. Hakim is the editor-in-chief of the Mashreq Politics and Culture Journal.

Arab youth express their hopes and wishes for the New Year, spanning everything from civil and political rights, to education, to arts and culture. By Rafiah Al Talei END_OF_DOCUMENT_TOKEN_TO_BE_REPLACED

Life imprisonment for crimes against humanity: that was the sentence handed down to Anwar Raslan in the world's first trial of a member of the Syrian torture system. Matthias von ... END_OF_DOCUMENT_TOKEN_TO_BE_REPLACED

Moncef Marzouki was Tunisia's first democratically elected president after the fall of dictator Ben Ali. Today he is the most prominent critic of increasingly counter- ... END_OF_DOCUMENT_TOKEN_TO_BE_REPLACED

Historically Iraq's Yazidi community was isolated, under-resourced and very conservative. Seven years after the "Islamic State" tragedy, the community is more open to the world – ... END_OF_DOCUMENT_TOKEN_TO_BE_REPLACED

In this new bilingual edition, translated by Humphrey Davies, al-Jawbari, one of the thirteenth century's leading experts in skullduggery reveals all there is to know about the ... END_OF_DOCUMENT_TOKEN_TO_BE_REPLACED
Author:
Hakim Khatib
Date:
Mail:
Send via mail

END_OF_DOCUMENT_TOKEN_TO_BE_REPLACED
Social media
and networks
Subscribe to our
newsletter