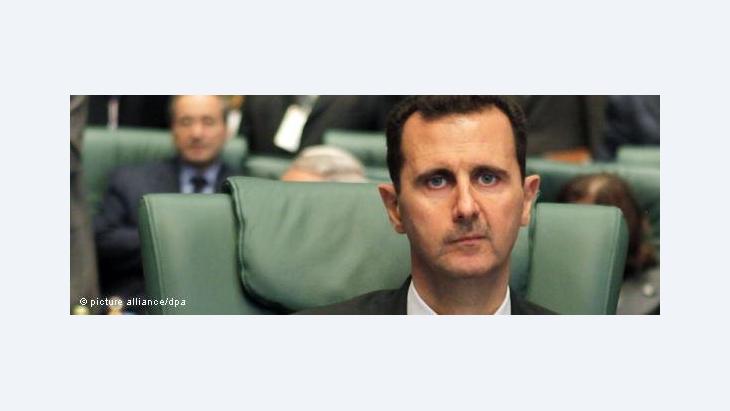 The international community has sharply condemned the violent crackdown in Syria. Support in the Arab world is waning for the Syrian regime, who insists on sticking to its guns. ﻿Petra Nicklis and Sabina Casagrande report

UN Security Council members said late on Wednesday in New York that they had learned "horrendous" information about continued violence in Syria, estimating that 2,000 people had been killed and a further 3,000 had disappeared during months of military repression against anti-regime protesters.

In light of the latest UN report on the situation in Syria, envoys from the four European members of the 15-country Security Council - Britain, Germany, France and Portugal - said President Bashar al-Assad's government had failed to heed UN demands to stop military repression and implement democratic reforms. After scheduling another report for next week, the European ambassadors said the Council should take "further action" unless there was immediate improvement from the government in Damascus.

As the UN considers its options, world pressure is increasing on Syria. Egypt's foreign minister Mohammed Kamel Amr said on Tuesday Syria was heading to a "point of no return."

"National reforms must be implemented to avoid foreign interference in Syrian affairs," Amr said, according to the state news agency MENA. Meanwhile, delegates from Brazil, India and South Africa visited Damascus on Wednesday for talks with Syrian officials on halting the deadly crackdown on pro-democracy protesters.

According to human rights organizations, more than 1,700 people have been killed. In the past week alone, over 300 people died during protests against the regime of President Bashar al-Assad. Human Rights Watch (HRW) said the tone by the international community clearly needed to sharpen.

"Not only has Syria ignored the Security Council's demands, but it has responded to the international community's demand to halt the violence by intensifying its bloody crackdown," said Sarah Leah Whitson, Middle East director at HRW, in a statement. "President Bashar al-Assad needs to hear loud and clear that the Security Council will not tolerate such contempt for its united call for Syria to change course." 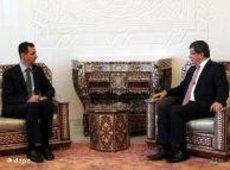 Assad and Davutoglu met for several hours in Damascus, but with no results

​​﻿Reactions in the region in recent days have shown that Syria is being isolated further. Turkey - in the past a close ally of Syria - sent its foreign minister Ahmed Davutoglu to meet with Assad on Tuesday, with no results. Assad rejected Turkish calls for restraint and vowed not to stop "chasing terrorist groups," according to the state Syrian news agency SANA.

Syria's neighboring countries are also joining the list of critics. Saudi Arabia, Kuwait and Bahrain have all recalled their ambassadors to Damascus for consultations. Saudi King Abdullah on Sunday announced that the violent suppression of the protests violated religion, values and morals. He called for extensive and speedy reforms in Syria. These words from Riyadh were just as loud and clear as they were unusual, said Abdulkhaleq Abdulla, a professor of Political Science at Emirates University in the United Arab Emirates.

"The Saudi step shows that the regime in Syria has begun to lose many of its significant friends - on the Arab, regional and international levels - and now Saudi Arabia joins the list and strikes the same note, that the Syrian regime is not dealing with this crisis correctly," Abdulla said. "The use of violence against the people - and that during Ramadan - is frightening and one can't remain silent about it any longer."

The Arab revolution has shaken up many countries in the region. The Saudi kingdom has not taken a clear position to date. Saudi Arabia helped Bahrain to crush the uprising there. The Saudis have completely held back from Libya, Tunisia and Egypt. But apparently, Saudi Arabia is now planning an about-face, said Middle East expert Michael Lüders. He said the Saudi leadership wanted to set an example.

"Saudi Arabia wants to have a progressive image and criticizes Bashar al-Assad, and deservedly so, but mainly out of self-interest," Lüders said. "On the one hand, it wants to create a better image of itself in the Arab world. And on the other hand, Syria is a close ally of Iran. And Iran and Saudi Arabia are, as everyone knows, arch-enemies." 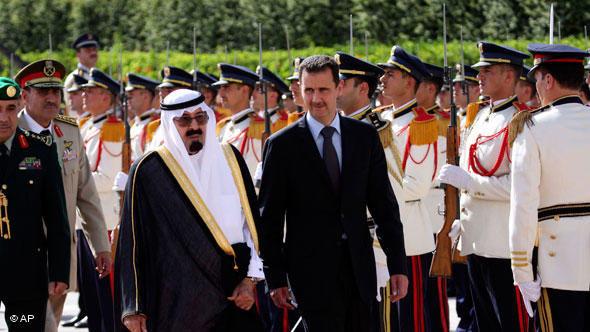 Ties between Saudi Arabia and Syria have been tense for years

The battle between Iran and Saudi Arabia for preeminence in the Middle East started long before the Arab Spring. But now, King Abdullah might sense an opportunity in Syria. Traditionally, the greatest contrasts in the region come together here, more than anywhere else.

The secular Syria is to this day a loyal partner of the Shiite theocracy Iran. A Syria after Assad, a member of the Alawite branch of the Shiites, would most likely be Sunni-led, just like the ruling dynasty in Saudi Arabia. And that, many experts believe, would be in the interest of King Abdullah.

But the Saudi criticism is also significant in that it sends a clear signal to the elite in Syria, said Ayham Kamel, an analyst at Eurasia Group in Washington. He said Gulf governments had until now provided Assad with some measure of diplomatic support by remaining largely silent.

Their shift to condemnation will "signal to the Syrian political and economic elites, especially Sunnis, that they should reconsider their allegiance to Assad," Kamel told news agency Bloomberg.

If the Saudi King now calls for reforms in Syria, he is skating on very thin ice, though. After all, he himself rejects any change to his absolute monarchy.

"In Saudi Arabia, there have been no significant demands for opening and democracy to date," Lüders said. "But still, the Saudi leadership tightened its laws in April. Criticism of the rulers, the Sharia and the Islamic order of the country has since been subject to additional penalties. King Abdullah has to be careful here that his call for reforms in Syria isn't also heard by the people in Saudi Arabia."

The West and in particular the United States have in any case welcomed the clear response by the Saudis. The political and economic heavyweight in the Arab world has shown Syria's president Assad the red card.

And without financial support, Syria cannot make ends meet, Lüders said. The country's economy is on the verge of bankruptcy and desperately needs support by the Saudis. Saudi Arabia therefore has many possibilities to put pressure on Syria through this financial dependency.

However, Rami Khouri, head of the Issam Fares Institute for Public Policy and International Affairs at the American University of Beirut, said international pressure would not have an immediate impact on Syria, but will take time. Pressure will build from within as Syria becomes more and more isolated on the international scene, he added. Assad will then have no other option but to look for a way out.

"When they are completely isolated and there is nobody in the world other than the Iranians who are supporting them, then they have a real problem and they have to find a political solution," Khouri told news agency AFP. "But it may be too late."

Home
Print
Newsletter
More on this topic
Violent Crackdown in Syria: Bloody RamadanPortrait of the Syrian President Bashar al-Assad: The Man of Missed OpportunitiesDossier: Uprisings in the Arab World
Related Topics
All Topics

The terror attacks in Paris, Brussels and Berlin were all carried out by men radicalised in jail. In Germany, politics and the judiciary are trying out new approaches to prevent ... END_OF_DOCUMENT_TOKEN_TO_BE_REPLACED

The assassination of the Iranian general Qassem Soleimani in a surprise U.S. drone strike is being used by the Islamic Republic of Iran to political ends, says Iranian journalist ... END_OF_DOCUMENT_TOKEN_TO_BE_REPLACED

With "Assad or We Burn the Country", Sam Dagher has furnished the world with some genuine ammunition against the Syrian regime's on-going campaign of disinformation. The only ... END_OF_DOCUMENT_TOKEN_TO_BE_REPLACED

There are only a few thousand Aramaic Christians left in south eastern Anatolia. And they are intent on preserving their ancient culture dating back one-and-a-half millennia. ... END_OF_DOCUMENT_TOKEN_TO_BE_REPLACED

Basma, Jad and Ma'zooza are about to join the Sesame Street family. The trio of new Arabic-speaking characters will help teach children in the Middle East to read and write, as ... END_OF_DOCUMENT_TOKEN_TO_BE_REPLACED