Assaf Gavron: "CrocAttack"
A Shrewd Insight into the Tragedy of Terrorism

In his third novel, "CrocAttack", Israeli author Assaf Gavron tells the parallel stories of an Israeli who survives three suicide attacks in a short space of time and a radical Palestinian. Volker Kaminski read the book and considers it a breathtaking montage 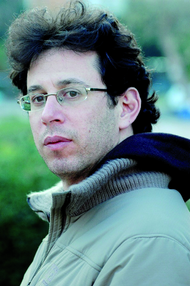 Assaf Gavron translated several books of fiction from English to Hebrew, including the novels by Jonathan Safran Foer and "9 Stories" by J.D. Salinger

​​Assaf Gavron's novel is about time: the time we need to make a telephone call, to drive to work, to eat breakfast, to watch television. Because every human life is finite and every minute is precious, humans should avoid wasting as many hours, minutes, and seconds as possible.

In a nutshell, helping people not to waste time is what Eitan Einoch does for a living. Einoch works for Time's Arrow, a start-up company in Tel Aviv that produces time-saving software.

His boss is convinced that "we live in a world where every second and even every tenth of a second is money." In the course of the novel, Einoch is forced to ask himself what time actually means in a horrific world where people commit suicide attacks that obliterate human life in the blink of an eye.

A tale of victims and perpetrators

Einoch has survived three brutal Palestinian attacks. However, despite the fact that he sustained virtually no physical injuries in the blasts, the extremist attacks have destroyed his life. His relationship with Dutschy, his partner, falters and eventually falls apart. Einoch is changed by the attacks; he can no longer concentrate, is traumatised, and suffers a series of personal setbacks.

Moreover, the improbability of having survived three attacks has turned him into a reluctant media star.

This in itself would be material enough for an exciting novel, but Assaf Gavron – who was born in Jerusalem in 1968, has published three novels and a volume of short stories, and is a bestselling author in Israel – chose not to restrict himself to the Israeli point of view. Parallel to the story of Einoch, the reader is presented with the story of one of the attackers, Fahmi, who is lying in a coma.

Fahmi is a Palestinian and comes from a refugee camp in the West Bank. He is actually a reasonable young man. However, like Einoch, his life has also been destroyed by adverse conditions. His older brother, Bilal (a raving fanatic who is violently opposed to Israeli occupation), succeeds in turning the gentle Fahmi into a walking bomb.

The way Gavron describes how these two opposing yet inextricably linked lives move closer together is thrilling. Einoch's unstoppable personal disintegration and his dubious reputation as a symbol of Israeli resistance to Arab terror is cleverly juxtaposed with Fahmi's tattered life as a powerless refugee camp inhabitant, his doubts about armed resistance, and his attempts to escape the clutches of his fanatical terrorist brother.

This montage of two parallel yet starkly different lives is gripping right from the very first page.

​​Gavron gives us an insight into an unfamiliar world of violence and uses credibly developed characters to illustrate the tragedy of terrorism that is created by the arrogance of Israeli soldiers who harass people in the occupied territories and by the confused fundamentalism and hate of the refugee camp inhabitants.

Gavron has his own particular way of using words and accurate images to recreate the emotions that run high on both sides of the divide. Readers will be appalled to read the account of how a gentle young man is transformed into a suicide bomber and how he prepares for his attack: shaving, washing, dressing in clean clothes, strapping on a belt crammed full of explosives, and climbing into a car to set off on his brief journey to "paradise".

The most convincing figure of all is Einoch, the crocodile, who survived all three attacks, but had to watch other people dying in the process. Incapable of letting go, Einoch starts looking for clues left behind by the victims of the attacks and following up these clues like a detective in order to find out the secrets of the dead.

All of this happens while life goes on around him, while people repress all thoughts about the everyday terror in their country, play down the violence in quiz shows, take bets about terrorist attacks, and even make fun of attacks in which "only" two people were killed.

Some of the passages in this novel are simply wonderful. One such a passage describes the moment when Einoch stumbles across information left by Gueta, a victim of the suicide bomb attack, on his pocket computer. Einoch tries to find out what Gueta was doing in Tel Aviv on the day he died.

He cannot stop time and continues to chase after it, although he knows that only those who are able to bring time to a temporary standstill – as is the case in a precious moment of love – are really alive.

And so Einoch hurtles headlong towards the climax of the novel and towards a dangerous encounter with Fahmi. Tragically, Einoch realises too late that Fahmi, who helped him follow-up some of the clues left by the victims, is actually out to get him.

CrocAttack is an exciting novel full of devastating conflicts and touching, moving moments. A must-read.

END_OF_DOCUMENT_TOKEN_TO_BE_REPLACED
Social media
and networks
Subscribe to our
newsletter