Assaf Gavron has written a science fiction novel that his fellow Israelis will not find very palatable. The year is 2067, Palestine has become the major power in the region, and Israel reduced to a small enclave. The real theme of the book, however, writes Volker Kaminski, is water scarcity 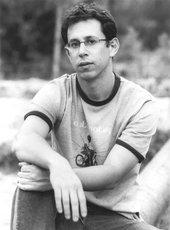 Assaf Gavron was born in Jerusalem in 1968, grew up in the city, studied in London and Vancouver, and now lives in Tel Aviv

​​ The year is 2067, a year of global drought. The worst predictions about climate change and global warming have come to pass. The new superpowers – China, Japan and, surprisingly, Ukraine – share out the scarce water resources amongst themselves, resources controlled by powerful water companies. Rainfall is a rarity whose occurrence is controlled by the use of sophisticated technology, the dates of each fall planned in advance.

The constantly thirsty people drink "Ohiya Water" or "Gobogobo Water", which they must buy from the companies. The private storage of water is not permitted and the ban is strictly enforced by means of an all-seeing surveillance system.

This is the nightmarish vision of the future that opens Assaf Gavron's thriller Hydromania. Gavron combines his dark "last days" scenario with a political vision sufficient to freeze the blood of every Israeli. Israel, where the story is set, has shrivelled to a mere enclave. Palestine has emerged victorious from the decades of power struggle and has had Jerusalem as its capital since 2030.

Israeli territory has been reduced to a narrow strip bordering the Mediterranean Sea and to two major cities, one of which, Tiberias, is destroyed through Palestinian military action in the course of the novel. Israel is thus left with only its capital, Caesarea, and some surrounding districts. Countless Israelis are reduced to refugee status: the poorer living in primitive conditions aboard wrecked destroyers off the coast, whilst the better-off inhabit floating residential areas with appealing names such as "Ocean 8".

Abyss of corruption, betrayal and murder

This dystopia apart, however, the conflict in the Middle East remains no more than a bit player in Hydromania. First and foremost are suspense and "action". Maya, a former employee in the ministry of finance, is pregnant. She has lived alone since the mysterious disappearance of her husband, Ido, a successful water engineer.

​​ At the beginning of the novel, Maya undergoes so-called "doy" surgery. In the world of the future as envisioned in Hydromania, everyone must have a chip implanted in their upper arm for communication and control purposes. With the help of these intelligent "subcutaneous chips" and "interface glasses", which people wear most of the time, finding one's way around, surfing the net, and making telephone calls are no problem – unfortunately, however, they also mean that wearers can be located and monitored at any time.

Dagi, an acquaintance of Ido, gets his hands on a new high-quality chip from the recently deceased lawyer, Ewig, and passes it on to Maya. Maya does not realise that Ewig has been the victim of foul play. Nor does she realise the link between Ewig and Ido, nor the former's involvement in negotiations connected with Ido's secret water collection project. While the reader is still trying to get used to the bewildering array of high-tech in Maya's life, the incidents come thick and fast and we are propelled towards a yawning abyss of corruption, betrayal and murder.

Fighting the power of the monopolies

Ido, it transpires, has struggled against the power of the water companies for years, secretly developing a new and efficient water storage system called "Ji-Ji" that could represent a serious threat to the monopoly of the big corporations. Maya is aware that her husband must be in trouble, possibly even dead. She too is an opponent of the water companies and decides to carry on Ido's project in his absence.

Soon Maya finds herself in danger. She is arrested, interrogated and forced to give back her valuable chip. She goes to her brother's family in Charod, a village not far from Caesarea. Here she is able to put her knowledge of water storage to practical use and together with the villagers begins work on a major building project.

Just as in his last novel, CrocAttack, Gavron uses cross-cutting techniques to tell the story of the events surrounding Ido's disappearance in flashback. As we witness the pregnant Maya becoming a water engineer and project manager, we also learn of the danger Ido got himself into when he tried to sell his Ji-Ji system in competition to the big water corporations.

The 300-page novel teems with memorable characters, including the 99-year-old Assafdschi, who Maya gets to know in Charod. Assafdschi offers a link to earlier times; via short essay-type interludes and poems he reflects on an era when there was enough water for everyone. He wistfully recalls happier days when rain fell in abundance and nature's bounty was plentiful.

It is through this character that Gavron articulates his true theme: the impending loss through increasing desertification and excessive technology of the possibility of a dignified life, where freedom and community are valued. Despite its high degree of technological sophistication, the world of 2067 is an impoverished one, its people living drab, colourless lives, deprived of pleasure. Luxuries such as alcohol, coffee, chocolate or pistachios have become things of the past.

Hydromania is an exciting eco-thriller, thematically topical, and satisfyingly complex in its handling of the issues. The intelligence of Gavron's narrative is testified to by the fact that Ido, the brilliant engineer who takes on the might of the water companies, is not portrayed as a purely positive figure. Idealistic and courageous he may be and capable of resuming a harmonious relationship with Maya when he surprisingly reappears towards the end, yet he is incredibly stubborn and inflexible too.

He had fled to Australia, without regard to Maya or concern for the difficulties she was left to face. It is only when he discovers that she has got the Ji-Ji project up and running that he decides to return. Finally, the novel addresses the ethical question of whether the interests of science should take priority over loyalty to one's nearest and dearest.

It is not surprising to find current political issues taking a back seat in a science fiction thriller. Nevertheless, it is a courageous author who is willing to present his Israeli readership with such a scenario; one in which a future Israel is reduced to the status of being no more than an arid enclave in a Palestinian-dominated Middle East.

Interview with Assaf Gavron
"You Have to be Interested in the Other Side"
In his novel, CrocAttack, Israeli writer Assaf Gavron provokes his readers with unusual perspectives: With both sensitivity and a large dose of black humour, the writer explores the inner world of an Israeli victim of terrorism and a Palestinian suicide bomber. Ariana Mirza spoke to Assaf Gavron

Comment on the Israeli-Palestinian Conflict by Assaf Gavron
Ignorance on Both Ends
In the current climate of crisis, Israel is endangering its democratic character, says the Israeli author Assaf Gavron. At the same time, however, he says western media often deny the real threat Hamas poses for Israel

Assaf Gavron: "CrocAttack"
A Shrewd Insight into the Tragedy of Terrorism
In his third novel, "CrocAttack", Israeli author Assaf Gavron tells the parallel stories of an Israeli who survives three suicide attacks in a short space of time and a radical Palestinian. Volker Kaminski read the book and considers it a breathtaking montage

END_OF_DOCUMENT_TOKEN_TO_BE_REPLACED
Social media
and networks
Subscribe to our
newsletter