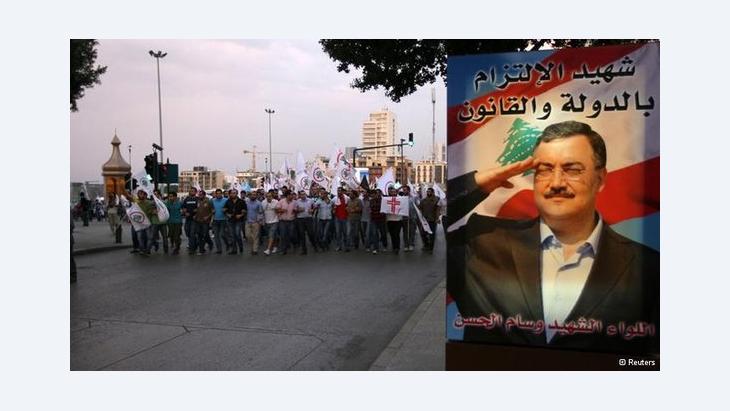 ﻿After the assassination of Wissam al-Hassan, the head of intelligence of Lebanon's internal security forces, everything in Beirut points to an impending storm. Fears of a new civil war are rife. By Karim El-Gawhary

A car bomb has unleashed a political shockwave that has rocked not only the whole of Lebanon but also its neighbouring countries. When the explosives detonated on Friday (19 October), tearing Lebanese intelligence official Wissam al-Hassan to pieces, it rapidly became clear that the consequences of this attack have the potential to send what is already an unstable situation in the region spiralling completely out of control.

It would not be the first time that an attack of this nature remains unsolved in Lebanon. But in this case, the dynamite is not in the facts surrounding the attack, which are as yet unclear, but in the way the attack is perceived. So far, no one has claimed responsibility, and there is no evidence as to who was behind the attack. But in the search for motives, many fingers are pointing in the direction of the Syrian regime.

A message from Syria?

During the summer, intelligence chief al-Hassan led an investigation that resulted in the arrest of pro-Syrian information minister Michel Samaha, who is accused of smuggling explosives into Lebanon at the behest of the regime in Damascus. Many people believe that the attack could have been an act of revenge. But this theory merely scratches at the surface. 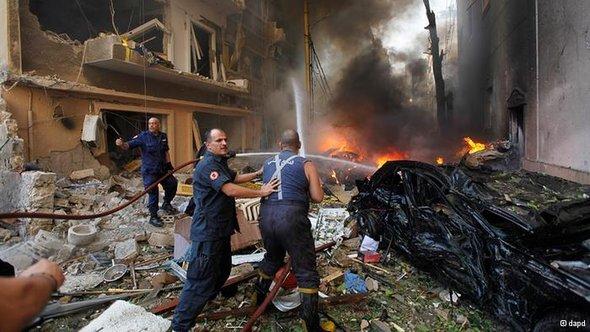 Since the bomb attack on Friday, 19 October, their have been violent clashes in the Lebanese capital, Beirut. This photo shows members of the fire service, desperately trying to gain control of the fires triggered by the car bomb

It is also possible that the attack is a message from Damascus, which reads: "The Syrian regime can set Lebanon alight overnight at anytime if it feels forced into a corner." It could be a kind of warning: if the Syrian regime falls, then Lebanon falls too.

The third motive for Bashar Al-Assad would be a classic tactical move. For months there has been a stalemate between the regime and the rebels in Syria. The regime can no longer turn back the clock, and the rebels are not managing to topple the autocrats in Damascus. An escalation could provide Assad with a way out. By inciting more unrest – on this occasion in Lebanon – he would add more regional and international urgency to ﻿the Syrian conflict, urgency to solve it quickly with – ﻿not without – the regime. As stated, this is an attempt to find the perpetrator through a search for motives. There is no proof, and the Syrian regime has no alibi.

Rekindling the flames of civil war?

For Lebanon itself, the entire business could have devastating consequences. The bloodier the conflict in neighbouring Syria becomes, the more the Damocles sword of a civil war hangs poised over Lebanon, the reason being that the political and denominational constellations in both countries are similar. 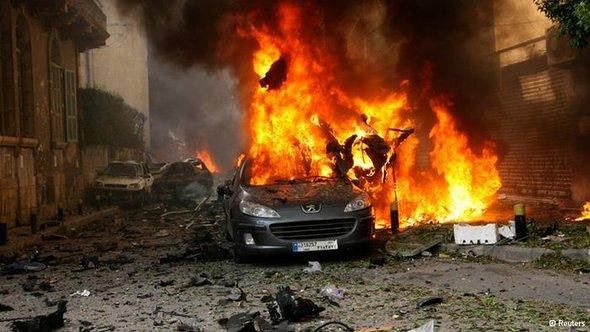 ​​The Syrian regime and the democratically-elected, Hezbollah-dominated governmental alliance in Lebanon are pulling in the same direction, as are the Syrian rebels and the Lebanese opposition. If a military stalemate has been in place between the two sides in Syria for months, Lebanon has been paralysed for years by a political stalemate between both movements.

This polarising situation in both countries is made even more complex by regional and international sponsors. While the Damascus regime and Hezbollah in Lebanon enjoy the support of Iran, the Syrian rebels and the Lebanese opposition are in the political orbit of Saudi Arabia and the US. This entanglement makes the conflict more urgent, but also much more difficult to solve and leaves Lebanon in Syrian captivity.

The only reassuring counterbalance to all of this is the fact that most Lebanese people have personal experience and memories of their own 15-year bloody civil war, an experience that few want to repeat. It is also, at present, the only hope that on this occasion, the Lebanese will not allow themselves to be sucked into the maelstrom.

Home
Print
Newsletter
More on this topic
Tension in Lebanon: In the Shadow of the Syrian RevolutionHistory of the Lebanese Civil War: Coming to Blows over a School TextbookChristians in Lebanon: Caught between the FrontlinesHezbollah and the Uprising in Syria: Can the ''Party of God'' Weather the Arab Spring?Syrian-Lebanese Relations: End of the Ice Age
Related Topics
Arab Spring, Arabellion, Syrian Civil War
All Topics

Any reconciliation between Turkey and Syria’s Assad regime would have disastrous consequences for many Syrians, explains Syria expert Kristin Helberg END_OF_DOCUMENT_TOKEN_TO_BE_REPLACED

There are signs of an imminent normalisation of relations between Turkey and Syria. This would allow Erdogan to score political points domestically before the upcoming elections ... END_OF_DOCUMENT_TOKEN_TO_BE_REPLACED

As Syrian camps housing families of Islamic State fighters get more dangerous, there are calls to bring children out, even if the mothers don't want to go. The idea of separating ... END_OF_DOCUMENT_TOKEN_TO_BE_REPLACED

Where are the measures to deal with the looming challenges facing the Arab world? In this commentary, Marwan Muasher warns that the region is in grave danger of falling behind ... END_OF_DOCUMENT_TOKEN_TO_BE_REPLACED

At the end of every year, the team at Qantara.de gives you a run-down of the ten most-read articles on the site over the past 12 months. Here is a quick overview of the stories ... END_OF_DOCUMENT_TOKEN_TO_BE_REPLACED

Social engagement is often motivated by religious factors. A new book explores the background to these community efforts and appraises how effective they are in helping to ... END_OF_DOCUMENT_TOKEN_TO_BE_REPLACED
Author:
Karim El-Gawhary
Date:
Mail:
Send via mail

END_OF_DOCUMENT_TOKEN_TO_BE_REPLACED
Social media
and networks
Subscribe to our
newsletter