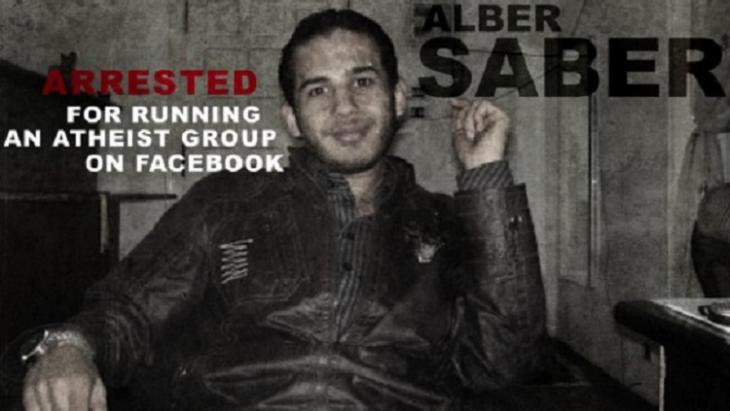 Atheists claim to hold no religious beliefs whatsoever: though some find that hard to accept, freedom of speech dictates that everyone should be entitled to express their ideas and thoughts without intimidation. Challenging religious oppression and outdated social mores, many Egyptians risk their lives to uphold and protect freedom and tolerance. By Hakim Khatib

Discrimination against atheists in Egypt is primarily a product of conservative social traditions and state religious establishments – the Al-Azhar mosque and the Coptic Church. Laws and policies in Egypt protect religious freedom, but punish those who ridicule or insult monotheistic religions by word or in writing: whereas insulting Buddhism or Hinduism is not punishable by Egyptian law, insulting Islam, Christianity or Judaism is. Between 2011 and 2013 ″Egyptian courts convicted 27 of 42 defendants on charges of contempt for religion,″ The Guardian reported.

Interestingly, an Egyptian citizen may only confess membership of one of the three monotheistic religions, namely Islam, Christianity and Judaism. In other words, people are allowed to believe or disbelieve in any religion for obvious reasons, but they are not allowed to have their beliefs or disbeliefs legally recognised. Therefore, in officially terms, all people have to be categorised as such. This provides a systematic obstacle to diversity.

According to official statistics, religious beliefs within Egypt are as follows: 90 – 94% of Egyptians are Sunni Muslims and 6 – 10% are Coptic Christians. While atheism is not limited to a specific segment of Egyptian society, there remains a lack of credible research into the matter. And that is simply because having no religion is taboo in Egypt.

Reminiscent of the wars they have declared on terrorism, corruption and neglect, Egypt′s political and religious state institutions have recently launched a new ″war on atheism″. A report issued in 2014 by Dar Al-Ifta Al-Misriyyah (Al-Azhar Centre for Islamic legal research) confirmed that the number of atheists in Egypt is no more than 866 individuals – i.e. the proportion of atheists is 0.001% of the Egyptian population. Although the methods used by Al-Azhar ″academics″ to reach this precise figure remain unknown, discriminatory discourse against atheists is commonplace in Egypt.

Al-Azhar mosque and the Coptic Church both go to great lengths to provoke such discrimination.  Since 2014, these institutions have been co-operating in the fight against atheism in order to ″save Egyptian society″. In the same year, the government also embarked on a ″national campaign″ to combat the spread of atheism among young people, with the help of a number of psychologists, sociologists and political scientists.

Nemat Satti, chairman of the central office of parliamentary and civic education at the Ministry of Youth and Sports, told Shorouk News in 2014 that the phenomenon of atheism had become as noticeable and widespread among young people as the phenomena of harassment, rape and extremism. The comparison is pretty clear.

Media in the frontline

This discrimination against atheists is a well-established aspect of Egyptian media as well. The Egyptian media are not neutral in their handling of atheists and their position in society. Like the governmental and religious campaigns, the media portray atheists as people with mental disorders, who need treatment to rid them of their illusions.

In 2015, for instance, during the ″Morning in the Capital″ live show on the Egyptian channel ″Capital TV″ (Al-Assema), an Egyptian journalist threw an atheist guest out of the studio for his ideas. An argument had broken out between the Egyptian presenter Rania Mahmoud Yaseen – who was hosting a debate on atheism – and her atheist guest Ahmed Al-Harqan, who referred to ″the lack of historical evidence concerning the existence of the figure known as the prophet Muhammad.″

Rania Yasin interrupted Al-Harqan saying, ″Go on! Get out! We don′t need atheists or infidels. People should pay attention to the warnings against infidelity, atheism and these outrageous ideas being peddled in society.″ Needless to say the guest vacated the studio. Still, one wonders why an Egyptian journalist, obviously unwilling to listen to what atheists had to say, would choose to host a debate about such a sensitive issue in Egypt.

While tales abound about the persecution of atheists in Egypt, here are a few instances that demonstrate how systematically the taboo is being handled. So far, there is no evidence that a change in the head of state or the government′s political orientation has any impact on the number of attacks against atheists. 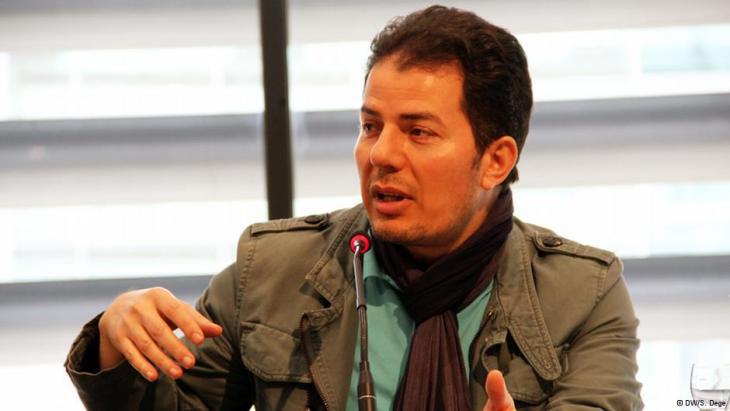 Hamed Abdel-Samad: in 2013, Egyptian clerics including Al-Azhar professor Mahmoud Shaaban, a member of Al-Jama′a Al-Isalmiyya Asem Abelmajed and a Salafi scholar Abu Ishaq Al-Heweny issued an Islamic ruling (fatwa) against him for writing a book on Islamic fascism. Abdel-Samad was accused of being a heretic and deserved to die as a result

In 2014, Karim Ashraf Mohamed Al-Banna, 21, was jailed for three years for ″insulting Islam″ by simply declaring he was an atheist on Facebook. Shockingly, his own father testified against him claiming that his son ″was embracing extremist ideas against Islam″.

In 2013, Egyptian clerics including Al-Azhar professor Mahmoud Shaaban, a member of Al-Jama′a Al-Isalmiyya Asem Abelmajed and a Salafi scholar Abu Ishaq Al-Heweny issued an Islamic ruling (fatwa) against Hamed Abdel-Samad for writing a book on Islamic fascism. Abdel-Samad was accused of being a heretic and deserved to die as a result. Shaaban said on Al-Hafez TV that: ″after he [Abdel-Samad] has been confronted with the evidence, he may be killed even if the [Egyptian] government doesn′t execute him.″

In 2012, the Egyptian blogger Alber Saber was sentenced to three years in prison for insulting Islam by posting a trailer of the YouTube video ″Innocence of Muslims″ on his Facebook page. Although the prosecution couldn′t find the trailer on Saber′s Facebook account, they accused him of religious blasphemy after finding a short video of Saber criticising both Islamic and Coptic religious leaders and institutions.

After detaining Saber for religious blasphemy, ″police incited the prisoners against Saber, claiming that he was an atheist and insulted the prophet Muhammad,″ stated the 2012 report on non-religious discrimination. Consequently, one of the prisoners injured Saber with a razor blade. 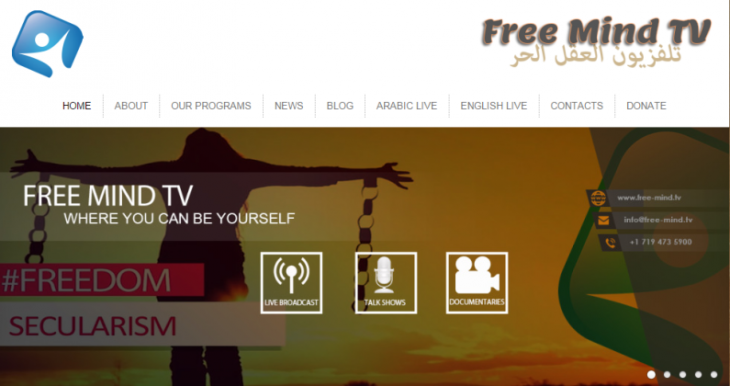 Fighting back: Free Mind TV, supported by a team of Egyptian atheists, is a secular online media outlet and news TV station that aims to provide the people of the Middle East and the world with a secular news source free of religious and government-based censorship

Atheism in Egypt remains a taboo and there is considerable evidence of systematic discrimination against atheists. Hampered by conservative traditions and state religious and political establishments, not to mention various restrictions, they are prevented from engaging in a serious debate about their fundamental rights.

General Abdel Fattah Al-Burhan has declared a state of emergency in Sudan and dissolved the Sovereign Council, which was made up of military personnel and civilians. What will now ... END_OF_DOCUMENT_TOKEN_TO_BE_REPLACED

Sex education – taboo in the Middle East. Or is it? Thanks to social media, millions these days are daring to ask everything about "it". Jennifer Holleis has the details END_OF_DOCUMENT_TOKEN_TO_BE_REPLACED

While Bashar al-Assad is still shunned by the West, which blames him for a decade of brutal war in Syria, a shift is under way in the Middle East, where Arab allies of the United ... END_OF_DOCUMENT_TOKEN_TO_BE_REPLACED

Unauthorised immigration to Europe went down at the peak of the pandemic. As EU countries re-open, migrant flows are back up. What does it mean for the EU – and for migrants? By ... END_OF_DOCUMENT_TOKEN_TO_BE_REPLACED

Newly discovered aerial photographs taken by the German Luftwaffe show what a keen interest the Germans took in British-controlled Palestine during the Second World War. Not only ... END_OF_DOCUMENT_TOKEN_TO_BE_REPLACED

Religions are often a source of conflict. But the worldwide Religions for Peace movement seeks to change that by galvanising interreligious dialogue. Delegates from 90 countries ... END_OF_DOCUMENT_TOKEN_TO_BE_REPLACED

Comments for this article: Breaking the taboo

With respect to Osiris, nearly everybody in Egypt is an atheist.

So too with Horus, and Isis, and Seth, and-- I hope the point is made.

Every Egyptian is an atheist about one god or another.

Either lock one another up or get over it...

END_OF_DOCUMENT_TOKEN_TO_BE_REPLACED
Social media
and networks
Subscribe to our
newsletter