In 2017, an angry crowd in Ankara blocked the funeral of the mother of Aysel Tugluk, deputy chair of the pro-Kurdish Peoples' Democratic Party (HDP) party. As a result, her mother Hatun Tugluk's body had to be removed from the grave and buried in another city. This case and that of Kiricdaroglu have once more brought the issue to the fore.

Critics say President Recep Tayyip Erdogan of the Justice and Development Party (AKP) needs to act. But Turkish Defence Minister Hulusi Akar, also present at the soldier's funeral, even expressed sympathy for the mob during the violent outburst: "Dear friends, you have made your point clear, please go home now," he said.

Sociologist Besim Can Zirh from the Technical University of Ankara views mob rule as a "tried and tested tool" of the Turkish government in times of crisis. The anti-Alevi sentiment before the massacres in Kahramanmaras and Sivas was motivated by the fact that the minority was making progress establishing themselves socially and politically.

Zirh believes that in secular groups in Turkey similar situations are being experienced. The lynching policy has three purposes: "It intimidates aspiring social groups, it serves as an outlet for political hatred of the population and it sends a warning: do not dare deviate from the life path we have planned for you." 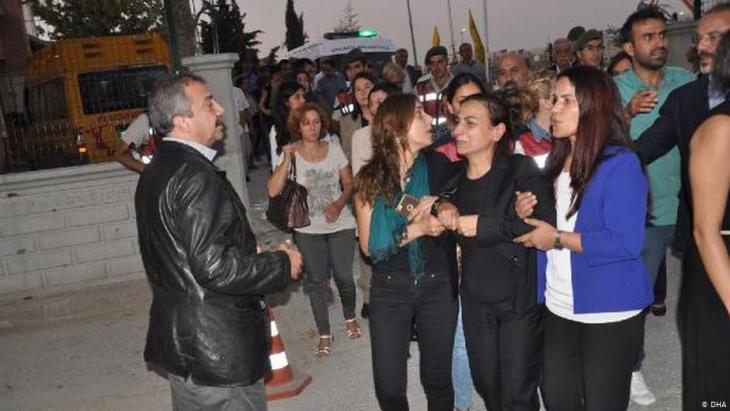 Violence and lynch law on the increase: in 2017, an angry crowd in Ankara blocked the funeral of the mother of Aysel Tugluk, deputy chair of the pro-Kurdish Peoples' Democratic Party (HDP) party. As a result, her mother Hatun Tugluk's body had to be removed from the grave and had to be buried in another city

Sezgi Durgun from Marmara University in Istanbul agrees that mob rule occurs mainly during volatile periods: "Such incidents show how people have internalised violence," adding that "the most dangerous aspect of mob rule is that a single incident can lead to collective morality and spread an assumption that the rule of law no longer applies."

According to Durgun, the lynching attempt illustrates that populism and heated debate now culminate in violent polarisation. So, he believes, it's hardly surprising that citizens, fuelled by nationalistic sentiment, take the law into their own hands.

Academic Nagehan Tokdog agrees – she also sees the climate of uncertainty as a decisive factor. She believes that political instability and the economic crisis are responsible for the increase of aggression against various groups.

But Tokdog also blames the Turkish mentality for the fact that there are more and more incidents, saying that Turkey is a country that only ever reluctantly concedes mistakes and crimes in society. "We cannot admit that such a thing is a disgrace. We just do not denounce acts like this. On the contrary, we kiss the fists of those who punch."

Tokdog is referring to bizarre images that did the rounds on social media in the wake of the incident at the funeral: one person who managed to punch Kilicdaroglu in the face was shown having his hand tenderly kissed after hitting the politician.

While academics may use the "Turkish mentality" or a phase of political insecurity to explain the attack on the opposition leader, many others blame Erdoganʹs AKP, even if the ruling party immediately distanced itself from the incident by saying "the AKP is against any form of violence."

However, in the local elections over a month ago, Erdogan repeatedly accused Kilicdaroglu of supporting the banned Kurdistan Workers' Party, which is considered a terrorist organisation.

This polarising rhetoric showed its true face in the Kilicdaroglu incident – as has since been revealed, there were also some AKP supporters among the violent mob.

The village of Vakıflı in the southern Turkish province of Hatay near the Syrian border, population 150, is the last remaining Armenian village in Turkey. Lately, interest in the ... END_OF_DOCUMENT_TOKEN_TO_BE_REPLACED

On his recent visit to Cyprus, Turkish President Erdogan continued to bang his two-state drum, insisting that this is now the only viable option for the divided island. By ... END_OF_DOCUMENT_TOKEN_TO_BE_REPLACED

Some companies in Germany are reluctant to hire Muslims. But it is not only the Muslim applicants who are losing out, so too are the companies. After all, there are multiple ... END_OF_DOCUMENT_TOKEN_TO_BE_REPLACED

Artists and intellectuals in Turkey are coming under massive pressure. Since the attempted coup against Erdogan by parts of the military in 2016, the government has intensified ... END_OF_DOCUMENT_TOKEN_TO_BE_REPLACED

The disappearance of Razan Zeitouneh and her colleagues has been one of the greatest mysteries of the Syrian war – until today. DW's investigative unit hunted clues across six ... END_OF_DOCUMENT_TOKEN_TO_BE_REPLACED

How can the various realities of Kurdish life, shaped by depression, resistance and war, be depicted in art? This is the question addressed by the “bê welat – the unexpected ... END_OF_DOCUMENT_TOKEN_TO_BE_REPLACED
Author:
Burcu Karakaş
Date:
Mail:
Send via mail

END_OF_DOCUMENT_TOKEN_TO_BE_REPLACED
Social media
and networks
Subscribe to our
newsletter