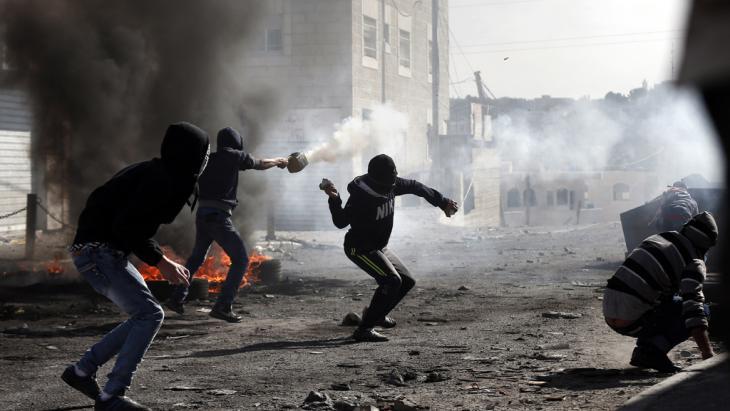 Attacks and unrest in Jerusalem

A third intifada in the making?

Jerusalem is once again a front-line city, haunted by the spectre of intifada. An update from Inge Günther in Jerusalem

The Jerusalem tram system was already controversial while still in planning. It runs several kilometres through the heart of the Arab neighbourhood of Shuafat, and hence through occupied territory, in order to connect the Pisgat Zeev settlement with the city centre. When the ultra-modern, air-conditioned "light train" finally rolled along the tracks in the summer of 2011, however, giving passengers a free trip during the introductory phase, many Palestinians changed their minds and were pleased with this new transport option. An elderly man in Shuafat's grocery store enthusiastically commented at the time that he felt "just like in Paris" when taking the tram. The other customers were likewise pleased.

For three years everything went well. Taking Jerusalem's only tram, which runs to a large extent along the old 1967 dividing line, ultra-Orthodox Jews with their prayer books, Israeli settlers and Palestinian men on the way to work sat peacefully side by side, along with Arab women on their way to do some shopping on Jaffa Street.

And then it was all over on 2 July, when 16-year-old Mohammed Abu Khdeir was abducted by right-wing extremist Israelis right in front of his parents' house, not far from the Shuafat tram stop. They took him away in their car and brutally killed him in revenge for the murder of three Jewish religious students kidnapped in the West Bank. In the Palestinian riots that flared up in response in the eastern part of Jerusalem and have since continued to smoulder, not only ticket machines were destroyed. The crime set in motion an escalating chain of events that has changed the face of the city.

Jerusalem on the front line

Along the tramline, people now live in fear of drivers running amok after Palestinians twice deliberately crashed their cars into crowds waiting at tram stops. Four people were killed, including a baby. Those who can do so avoid taking the tram, which is now escorted by the police as it passes through the Arab quarters in the evening hours. Forty per cent of the carriages have already been the target of stone-throwing. Heavily armed border patrols are on the beat almost everywhere in the eastern part of the city. Jerusalem is once again a front-line city. 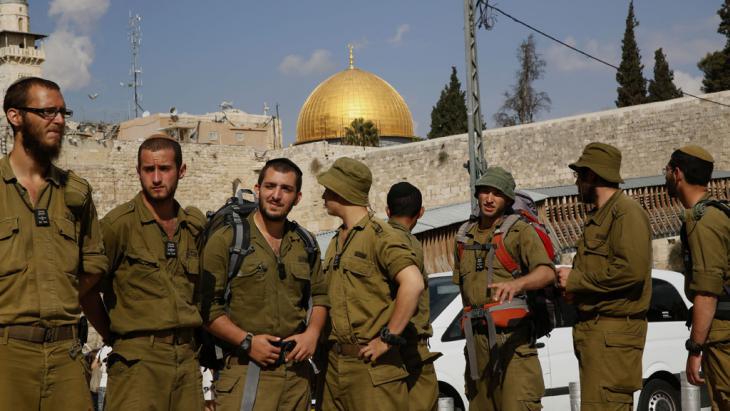 The Temple Mount is at the centre of the conflict. After the assassination attempt on the Jewish right-wing radical Yehuda Glick, the Israeli police sporadically blocked access for Muslims to the sacred Temple Mount and its surroundings. Jordan withdrew its ambassador from Israel in protest. The plateau with the Dome of the Rock and the Al-Aqsa Mosque is the third holiest site for Islam after Mecca and Medina

What looks like intifada is intifada, some Israeli commentators claim. And many Palestinians feel a secret satisfaction at the growing insecurity among Israelis. The second, armed intifada, when more than 120 Israelis were killed by suicide bombers in a single month, in March 2002, admittedly had a completely different dimension of terror. But the uncoordinated attacks in the recent wave of violence, which include knife attacks in Tel Aviv and the West Bank settlement of Gush Etzion, are difficult for the Israelis to prevent. The assassins thus far had no more than loose connections with Islamists, whether Hamas or Jihad. They acted instead as "solo terrorists". And that is just what makes them so unpredictable.

"Someone gets up in the morning and decides to kill a couple of Israelis," says Jacov Amidror, former security advisor to the Netanyahu government. In such cases, people have little chance of detecting the danger in time and defend themselves. Apart from building concrete barriers at the tram stops, police can do little to stop individual attackers, says Amidror.

"Put up resistance, even with your cars!"

These same assassins are in turn the new heroes in Palestinian eyes, instilling fear in the hearts of the Israelis. On Facebook pages cartoons can be found of cars leaping at people like dangerous predators, with slogans like:  "Revolt and resist, even with your cars!"

The charged atmosphere feeds above all on the tensions radiating from the Temple Mount in Jerusalem, revered in Islam as Haram al-Sharif (the Noble Sanctuary). Israel's Prime Minister Benjamin Netanyahu never tires of giving assurances that the government will not interfere with the status quo, which gives Muslims religious priority on the Al-Aqsa plateau. He supposedly even made this promise personally to King Abdullah of Jordan, the supreme guardian of the site. Amman does not seem convinced, though, and recalled its ambassador from Tel Aviv for consultations in protest against the temporary Israeli closure of the Al-Aqsa entrances.

This does not stop Netanyahu's right-wing nationalist party colleagues, foremost among them Likud MP Zipi Hotovely, from making provocative appearances – particularly after the assassination attempt on Yehuda Glick. Glick, a passionate crusader for "Jewish freedom on the Temple Mount", was shot and seriously injured by a Palestinian in late October. 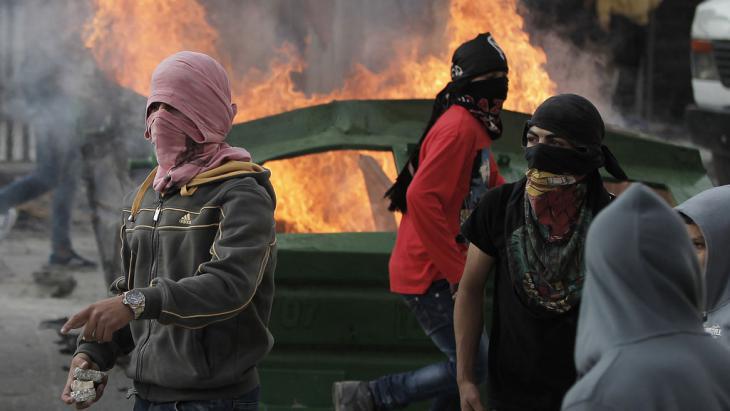 New "War of the Stones": the Jerusalem intifada is distinguished by the fact that there is no political leadership behind it, and its activists instead act of their own accord. The mostly young stone-throwers are angry at everyone: at the Israeli government, which is expanding Jewish settlements in East Jerusalem and allowing the Arab quarters to fall to ruin, but also at the Palestinian leadership

In any case, during his trip to the Middle East, US Secretary of State John Kerry hastily initiated crisis talks in Jordan with King Abdullah and Netanyahu, who flew in at the last minute from Israel. He elicited a promise from both these men, as well as from Palestinian President Mahmoud Abbas, whom Kerry had previously met in Amman, to make every effort to de-escalate the explosive situation. As a sign of goodwill, Israel lifted age restrictions on those attending Friday prayers, a move that has barred Muslims under the age of 50 or 35 from entering the Al-Aqsa Mosque in recent weeks. This has gone some way to easing the pressure. The protest prayers involving Palestinians kneeling out on the streets had in any case only served to foment outrage in Arab neighbourhoods.

From a religious viewpoint, it is almost a mortal sin for a Jew to visit the Temple Mount, says Israel's Sephardi Chief Rabbi Yitzhak Yosef. "We must put a stop to this. This is the only way that the blood of the people of Israel may stop being spilled." According to ultra-orthodox teaching, religious Jews must avoid the area if only to prevent inadvertently desecrating holy ground. The problem is that national religious rabbis have long claimed the opposite: that it is almost a sacred duty to pray there. And for the Palestinian factions, whether Fatah, Hamas or Jihad, militant calls to defend Al-Aqsa offer an ideal way to raise their profile.

Anger directed at everyone

What makes the "Jerusalem intifada" different is that there is no political leadership behind it, and its activists instead act of their own accord. The mostly young stone-throwers are angry at everyone: at the Israeli government, which is expanding Jewish settlements in East Jerusalem while allowing the Arab quarters to fall to ruin, and also at the Palestinian leadership in Ramallah, which makes big promises but does little to achieve them and which has no say in the eastern section of the city, which was annexed by Israel in 1980.

To make matters worse, there is a yawning social gap between the Jewish and Arab city districts. Palestinians make up about 37 per cent of the more than 800,000 residents of Jerusalem and have to pay taxes like everyone else. However, only 12 per cent of the budget is devoted to their interests, an unequal distribution that is manifested in dilapidated schools, potholed streets and overflowing rubbish containers.

Since the wall was built separating East Jerusalem from the West Bank, many suburbs are increasingly coming to resemble slums. Under Mayor Nir Barkat, himself a member of the National Religious Party, a five-year programme for East Jerusalem was launched in the summer, with a budget of €12 million a year. The money is not for the benefit of the citizens, however, but will mainly be used for measures such as fighting crime, according to a joint report issued by Israeli and Palestinian NGOs.

The "Jerusalem united forever" cited in Israeli law has in fact never had much to do with reality. The "Jerusalem intifada" has once again made people more aware of the invisible dividing line. In the long run, the present conditions are unsustainable, no matter how much police force Netanyahu summons.

What is happening in the cosmos of this "Holy City" is a warning to all those who believe that a political solution can be dispensed with. Gilly Harpaz, spokesperson of the Geneva Initiative, puts it this way: "Bi-national Jerusalem demonstrates what life in Israel would like be if it became a bi-national state."

Beyond the latest crisis with Iran, current U.S. Middle East policy is nothing if not chaotic. Many fear that the Trumpian approach could irreparably damage future U.S. ... END_OF_DOCUMENT_TOKEN_TO_BE_REPLACED

At the suggestion of his Arab students, Israeli psychologist Ofer Grosbard created the project "Quranet", which uses texts from the Koran to solve educational problems in schools ... END_OF_DOCUMENT_TOKEN_TO_BE_REPLACED

Contemporary artist Mona Hatoum is one of those figures whose presence in western capitals stimulates much attention and critical writing, while her exhibitions in Arab cities ... END_OF_DOCUMENT_TOKEN_TO_BE_REPLACED

Wall, fences and checkpoints have become a way of life in the West Bank. But now innovative start-ups are using digital means to overcome borders and connect people across the ... END_OF_DOCUMENT_TOKEN_TO_BE_REPLACED

The collapse of traditional multilateralism in the Arab world has been accompanied by a significant shift in American Middle East policy under President Donald Trump, writes ... END_OF_DOCUMENT_TOKEN_TO_BE_REPLACED

In her latest novel, "The Book of Disappearance", Palestinian author Ibtisam Azem strikes a nerve with a fantastical tale that simultaneously fascinates and moves the reader, ... END_OF_DOCUMENT_TOKEN_TO_BE_REPLACED
Author:
Inge Günther
Date:
Mail:
Send via mail