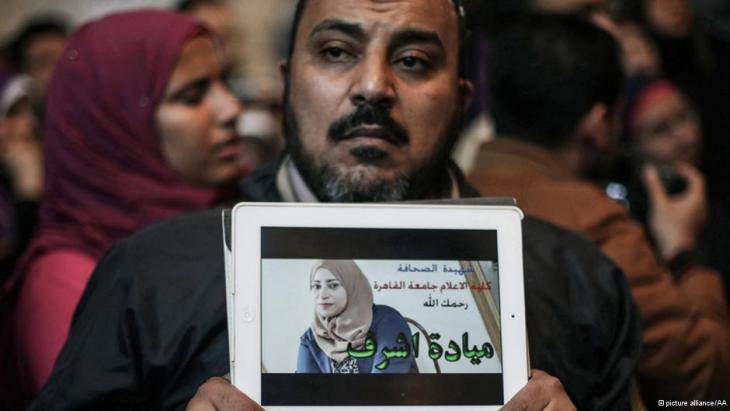 Attacks on journalists in Egypt
Caught in the crossfire

Once again, a young woman journalist has been killed in Cairo, and once again, no one is being held responsible or brought to justice. Karim El-Gawhary reports from Cairo on the case of the murdered journalist Mayada Ashraf

A young, self-confident woman wearing a red headscarf and a friendly smile looks down from the wall of the Egyptian Press Syndicate in Cairo. Anyone who is immortalised in a portrait on the exterior wall of the syndicate building is no longer among the living. This is the wall of martyrs – those who have died in Egypt while in the service of the pen or camera. While the painter puts the finishing touches to the portrait, his colleagues are already dismantling the scaffolding.

Below, on the steps of the entrance, a few dozen journalists have assembled for a silent protest. Their mouths are taped shut and they are holding photos of Mayada Ashraf, the murdered journalist. The images of the 22-year-old reporter for the Egyptian daily paper "Al-Destour", wearing a headscarf, with red-pursed lips and heavy makeup, reflect the contradictions in the lives of young Egyptians: full of hope and with their whole lives in front of them, they are trying to find their place in Egypt's conservative and politically polarised society.

Everyone who knew Mayada has described her as courageous and ambitious. During Mohammad Morsi's time in office, she reported on demonstrations from the front line. She continued this practice after last summer's military coup, which removed Morsi from office, covering clashes between opponents of the coup, the Muslim Brotherhood and security forces. This proved fatal for Mayada on 28 March 2014. While reporting on a demonstration held by coup opponents in the slum district of Ain Shams in northern Cairo, the young reporter was shot dead. A video on YouTube shows screaming and terrified demonstrators carrying away her lifeless body, her colourful headscarf full of blood.

Since then, opinions have differed sharply as to who is responsible for Mayada's death. Media outlets controlled by the military immediately reported that masked supporters of the Muslim Brotherhood shot her during the demonstration. They have repeatedly cited critical articles written by Mayada during Morsi's presidency and stressed that the young journalist was a fervent supporter of last summer's anti-Morsi mass protests, which led up to the military coup. 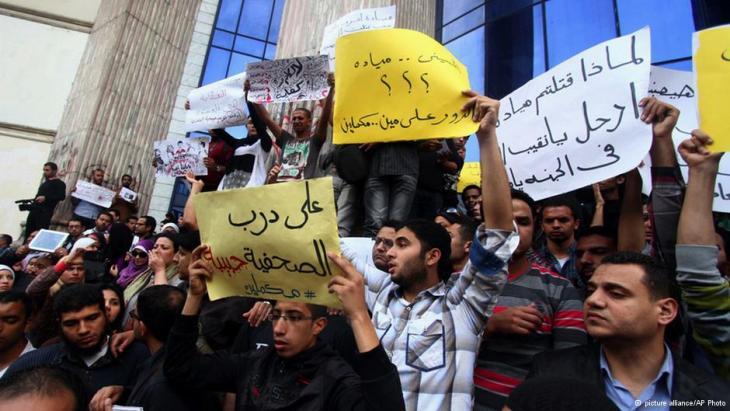 Daring to raise their voices: the killing of Mayada Ashraf on 28 March 2014 prompted fellow journalists to demonstrate in public for safer working conditions (pictured here)

The Egyptian Interior Minister even declared in a hastily called press conference that there were violent clashes between supporters of the Muslim Brotherhood and residents of the district on the day of the demonstration. He announced that the public prosecutor was investigating the case. "I can assure you that the police bear no responsibility for the death of Mayada," he said.

Savage criticism of the powers that be

His version of events, however, has come under increasing scrutiny, especially among users of social media. Here, Mayada's circle of friends in particular has accused the police and its snipers of causing Mayada's death. In addition, they stress that Mayada's criticism of Morsi did not automatically make the journalist a supporter of the former military head and current presidential candidate Abdul Fattah al-Sisi. On her Facebook page, a number of very critical remarks are directed at Egypt's new rulers.

After the bloody break-up of the protest camp of anti-coup protesters by security forces last summer, Mayada wrote, "It is not worth dying for Morsi, nor is it worth giving up our humanity for al-Sisi." The one certainty is that the differing camps in this divided country are attempting to use Mayada's tragic death to their own ends. The truth is that whoever is responsible for her death is hiding behind this conflict.

The search for the truth begins in Istanha, a small village in the Nile Delta about an hour's drive from Cairo. This is where Mayada's family lives. A number of benches have been set up in front of the house for mourners, especially those who come in the evening. Yet, this morning, Ashraf, Mayada's father, is alone with his pain and stares off into the emptiness of the dusty village alley.

"The fire that has been burning inside me since my daughter died can't be extinguished even by all the water in the world," he says, summing up his grief. When asked who is responsible for his daughter's death, he just shrugs his shoulders. "Only God knows!" he says, beckoning towards his humble home. Inside, the Koran is being recited on television. Mayada's brother and mother sit there, still in a state of shock. They begin to talk about Mayada, the daughter and sister, in an attempt to get over her death. Her father describes her as "my angel, killed by a coward hiding himself in a hole like a rat."

For a moment, the eyes of Azza, her mother, light up. "My daughter was top of her class in her final year at school," she says, pointing to the certificate still hanging above the desk in Mayada's small room. "She was always unbelievably hard-working and often studied late into the night," she says. With a certificate full of results like 97 per cent, she could have chosen to become anything. "We hoped that she would study engineering, but she absolutely wanted to become a journalist," says Azza. 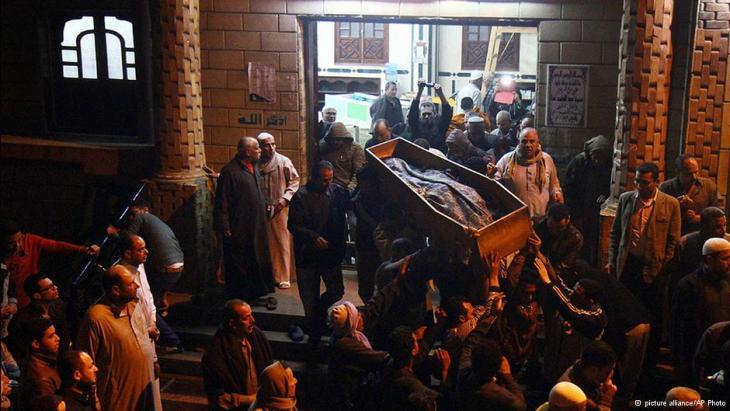 A funeral service for Mayada Ashraf: "The fire that has been burning inside me since my daughter died can't be extinguished even by all the water in the world," says the father of the murdered journalist Mayada Ashraf

"We will find out the truth"

Her mother says that Mayada showed no interest whatsoever in her recommendations for possible husbands. She was always completely focused on her work. Mayada's choice of profession may have been influenced by her experiences during the uprising against Mubarak. At the time, Mayada was not in her village, but on Tahrir Square. Azza does not believe that the real circumstances surrounding the death of her daughter will ever come to light. "We are a simple family without any powerful connections," she says. Her husband, Ashraf, contradicts her. "We will find out the truth with the help of Mayada's colleagues and other journalists," he says hopefully. Then, he bursts into tears.

Back in Cairo, the search for eyewitnesses is proving difficult. One of Mayada's colleagues, who was with her at the demonstration, supposedly told friends that Mayada was shot by the police as she stood beside her. She is now unwilling to speak. Her friends claim that she was intimidated; whether this was indeed the case is unclear.

Instead, the young journalist Abdel Latif Subh, who works for the daily newspaper "Youm7", has decided to come forward. He was standing behind police lines on the day that Mayada was shot. At first, he says he observed physical confrontations between demonstrators and local residents. Then the police attempted to disperse the demonstration with tear gas and buckshot. As a result, the demonstrators began to scatter. At that moment, the police in the rear suddenly began to fire live ammunition directly into the crowd. "I called a colleague who was at the demonstration with Mayada. She said that Mayada had just been shot," he recalls. Only then, he says, did the demonstrators regroup and some of them began to shoot back. "By that point in time," says Subh, "Mayada was already dead."

It is extremely unlikely that anyone will ever be held responsible for Mayada's death. The Committee to Protect Journalists has ranked Egypt as the third most deadly country in the world for journalists, just behind Syria and Iraq. In the statistics, however, Mayada is just another journalist who lost her young life in tragic circumstances while working in Egypt. There have been at least seven other cases since last year alone.

Back in Mayada's village, her father Ashraf has returned to one of the benches in the dusty alleyway. He has his tears under control now. In bidding farewell, he tries once again to put Mayada's death into perspective. "Not only my daughter," he says, "but the daughter of all journalists has been murdered."

Tourists have been returning to Tunisia, Egypt and Morocco. But, given the global uncertainty caused by the Ukraine war, will the comeback be enough to save a struggling sector, ... END_OF_DOCUMENT_TOKEN_TO_BE_REPLACED

In this essay, renowned Lebanese journalist and writer Hazem Saghieh asks whether the Arab Levant, which stretches from Iraq in the east to Egypt in the west, will remain an ... END_OF_DOCUMENT_TOKEN_TO_BE_REPLACED

By 2050, the Middle East and North Africa could be dealing with many more elderly people suffering from dementia. A lack of facilities, specialists and local knowledge means the ... END_OF_DOCUMENT_TOKEN_TO_BE_REPLACED

With his fist bump greeting for a man he previously called a pariah, US President Biden has paved the way for Saudi Crown Prince Mohammed bin Salman's return to the international ... END_OF_DOCUMENT_TOKEN_TO_BE_REPLACED
Author:
Karim El-Gawhary
Date:
Mail:
Send via mail

END_OF_DOCUMENT_TOKEN_TO_BE_REPLACED
Social media
and networks
Subscribe to our
newsletter