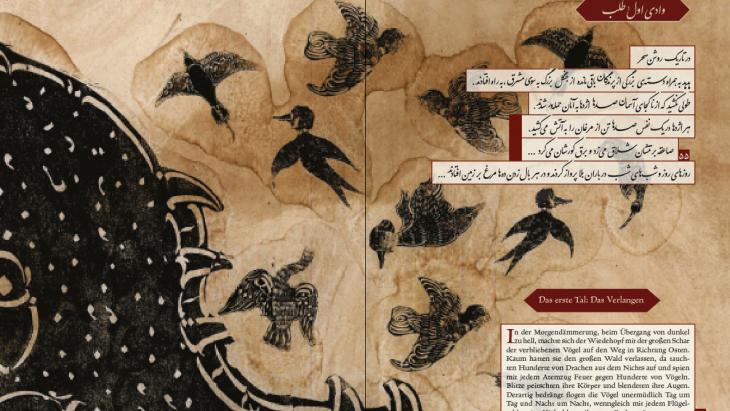 Fariduddin Attar’s "The Conference of the Birds", one of the seminal works of Islamic mysticism, has recently been published in sumptuously illustrated German translation. It makes an excellent introduction to the Persian poet. By Gerrit Wustmann

Many people are familiar with Jalaluddin Rumi. The Persian mystic, who was born in 1207 in what is now Afghanistan and died in 1273 in Konya, is regarded as the world's bestselling poet. Since he spent his life in different places, both Iranians and Turks claim him as one of their own.

His fame far outstrips that of his Sufi master Fariduddin Attar, who – depending on which source you follow – was born in about 1136 in Nishapur and probably lost his life in around 1220 during a Mongol attack. But Attar's central work, The Conference of the Birds, was rightly described by German Islamic studies scholar Annemarie Schimmel as a "masterpiece", and remains one of the most important verse epics, not only of Persian mysticism but of world literature as a whole.

The long poem focuses on the spiritual world of Sufism, which is explored in a sprawling parable: the hoopoe, which in the Koran is the emissary between Solomon and the Queen of Sheba, calls on all the birds of the world to accompany him on the arduous, years-long journey to Mount Qaf, where he promises they will find the Bird King, Simurgh. 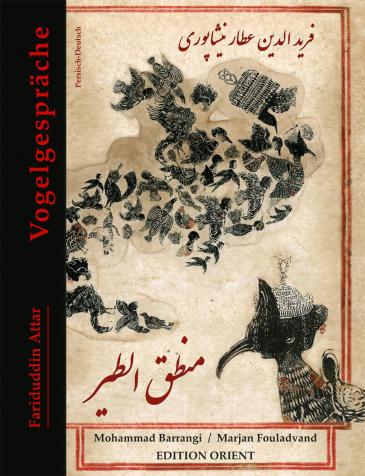 A classic of Persian literature: in a deluxe bilingual Persian-German edition, the Berlin publishing house Edition Orient presents a new edition of Fariduddin Attar's "Vogelgespraeche". Featuring illustrations by London-based Iranian artist Mohammad Barrangi, this volume is bound to be treasured by bibliophiles

At first the hoopoe meets with strong resistance, refusal and doubts. Many of the birds don’t want to join him, for all kinds of reasons, but he keeps trying to convince them, speaking to each in turn with growing success:

"'Life! Yes, what will you have seen of its brilliance? What do you get from winter, if your bones do not shiver in its icy cold; what from spring if it does not enchant you, and what from the sky if you do not lose yourself in it?"

"How trifling is the life that ends in death, if you do not fill it with meaning beforehand? Life is there for you to use, to serve you for a short time and to be a worthy companion to you. Life, what do you have to offer to souls? There is no person whose soul has not suffered.' But the parrot was firmly resolved to stay there and return to his golden cage."

The nightingale, meanwhile – and how could it be otherwise – is so wrapped up in her unrequited love for the rose that she isn’t open to anything else.

On the path to self-discovery

Passages like these demonstrate the timeless quality of The Conference of the Birds. Attar makes use of the birds to run through the whole gamut of human attitudes, characteristics and weaknesses, but no matter what the hoopoe encounters, he always has faith in the persuasive power of the word. The poem contains plenty of clear references to the Koran – worth mentioning because in many translations of Sufi literature for a western readership these have been smoothed out.

Overly explicit or supposedly incomprehensible religious references are often removed. This approach may have increased the popularity of someone like Rumi, making him easier to digest, but it ultimately produces editions of his work that bear little resemblance to what Rumi and others intended to convey in their poetry.

In the end, a mighty flock of birds – with the hoopoe at its head – sets off for Qaf, and their journey through the seven valleys of the Sufi path is in fact the proverbial destination. So many birds are lost along the way that eventually, only thirty are left to meet Simurgh – or rather, to meet themselves and gain self-knowledge: 'si murgh' means 'thirty birds'.

There have been a number of German translations or adaptations of Fariduddin Attar’s work, most recently a prose translation of the full text by Islamic studies expert Dr Katja Foellmer, with the title Die Konferenz der Voegel. It was published by Marix Verlag in 2008 and has since been reissued several times. 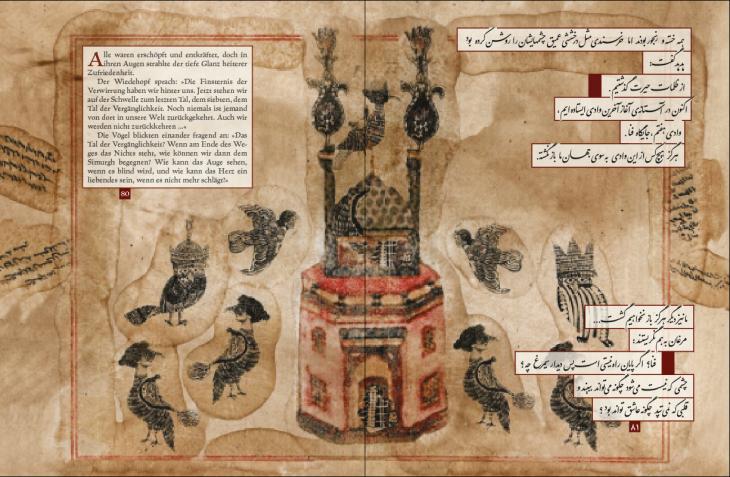 Less famous than Rumi, but unfairly so: "Fariduddin Attar – depending on which source you follow – was born in about 1136 in Nishapur and probably lost his life in around 1220 during a Mongol attack. But his central work, 'The Conference of the Birds', has rightly been described by Annemarie Schimmel as a 'masterpiece'," writes Gerrit Wustmann

Edition Orient has now produced a new deluxe, bilingual German-Persian edition, in a large hardback format quarter-bound in cloth and beautifully illustrated by Iranian artist Mohammad Barrangi. Born in 1988, Barrangi works on handmade paper using old calligraphy quills and pens, giving his cryptic drawings the look of old manuscripts or occasionally even cave paintings. As you turn the pages, you might imagine yourself beneath the arches of an ancient vault, or looking at weathered tiles at the entrance to a mosque.

His technique allows the pictures and calligraphy to vacillate between a huge illustrative presence and ambiguity. Varying in each ornamental repetition, they complete rather than merely complement the text, turning this new edition into a poetic and visual Gesamtkunstwerk.

Attar’s poem has been translated from the Persian for this edition by Thomas Ogger, and Marjan Fouladvand has sensitively adapted it into clear prose with a fairy-tale quality to it. The conversations of the “conference” have been reduced to what is essential to the plot, with individual passages such as the argument between the parrot and the hoopoe left to stand in for the much longer and more numerous conversations in the unabridged text.

This edition will therefore appeal to readers already familiar with Attar, who will appreciate Barrangi’s new interpretation, as well as those encountering Attar for the first time. This abridged version gives the latter a good introduction to The Conference of the Birds, which can be expanded and deepened later, perhaps using the Foellmer translation mentioned above.

Egyptian authorities have Mada Masr in their sights once again after critical reporting. But the editor of the country's last independent news source is adamant they will continue ... END_OF_DOCUMENT_TOKEN_TO_BE_REPLACED

Like Christianity, Europe's history is one of migration. Both have strong roots in the Orient and in cultures thousands of years old. Cultural historian Bernhard Braun invites us ... END_OF_DOCUMENT_TOKEN_TO_BE_REPLACED

Mohamed Abla is the first visual artist from Egypt to be awarded the Goethe-Institut’s Goethe Medal, Germany’s highest honour in the area of foreign cultural policy. Stefan ... END_OF_DOCUMENT_TOKEN_TO_BE_REPLACED

Bachtyar Ali sends the hero of his latest novel – "Mein Onkel den der Wind mitnahm" – literally flying. Jamshid is so thin after his years as a political prisoner that a gust of ... END_OF_DOCUMENT_TOKEN_TO_BE_REPLACED 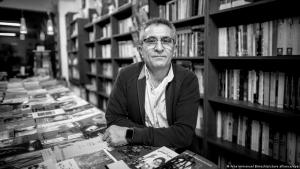 Following a serious illness, writer, publisher and journalist Abbas Maroufi has died at the age of 65 in a hospital in Berlin. He was best known for his novel "Symphony of the ... END_OF_DOCUMENT_TOKEN_TO_BE_REPLACED
Author:
Gerrit Wustmann
Date:
Mail:
Send via mail

END_OF_DOCUMENT_TOKEN_TO_BE_REPLACED
Social media
and networks
Subscribe to our
newsletter