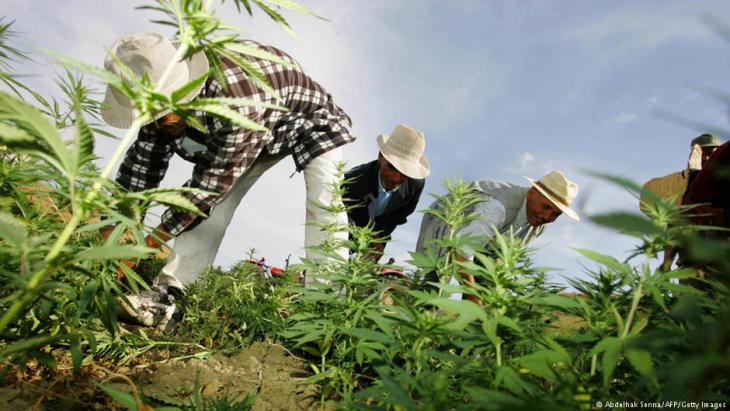 In a number of Arab countries, people have launched campaigns to have hashish legalised. So far, their efforts have met with little success: there is still stiff opposition from both conservative politicians and religious circles. By Reda Ghoneim

"Hashish is illegal, and alcohol is legal. But why? One causes inebriation, and the other is inebriating. Both are forbidden. Both damage your health. Hashish is expensive and alcohol even more so. Why is the law biased toward alcohol? The law permits alcohol because we pay taxes for it. So permit hashish and we'll pay taxes for that too."

These were the musings uttered by Egyptian actor Emad Hamdy in his role as Anis in the 1971 film adaptation of Nobel laureate Naguib Mahfouz's celebrated novel, "Adrift on the Nile" (Tharthara Fawq al-Nīl).

These musings constitute the first public call for the legalisation of hashish in the Arab world, to be treated in the same manner as alcohol.

Years after the publication of Mahfouz's novel, a number of Arab states began to seriously consider the legalisation of hashish. The reasons varied, most notable among them were the added revenues that would contribute to the state coffers, as well as reducing the rates of addiction.

Some of these countries indeed bore witness to calls and suggestions for the legalisation of the herb, which is smoked by millions of Arabs in Egypt, Morocco, Tunisia and Lebanon.

The suggestions were based on the existing models in countries like the Netherlands, Uruguay and the United States as well as others.

Two years ago, the head of the Cigarette Dealers Association in Egypt, Osama Salama, requested that the government legalise hashish, explaining that the state could add millions to its budget, while lowering the consumption of the narcotic.

"The amounts spent on the illegal trade of hashish could be redirected through the imposition of taxes on hashish, just like alcohol. Legalisation would resuscitate the Egyptian economy. Let's look at the European countries. [Legalisation] would provide nearly $4 billion to the state treasury," said Salama, noting that he has since dropped his campaign due to the attacks he was subjected to. 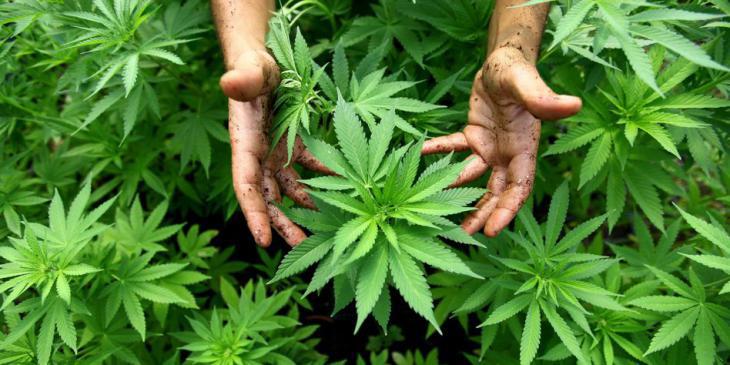 A unique experiment: Uruguay is planning to deprive drugs clans of their power with a daring initiative. The idea hails from the former urban guerrilla fighter and later president José Mujica. Starting in July 2017, registered users will be able to buy a maximum 10 g of cannabis per week in approved pharmacies across the county. This is the last phase in a process of legalisation that was begun in 2013

Mere hours after Salama's calls to the government for legalisation, a hashtag that translates as "legalize hashish" went viral on Twitter, with hundreds of Egyptians picking it up in support of the call.

Prominent Egyptian politician Osama al-Ghazali Harb notably supported the calls for legalisation, stating that the government has failed to prevent the use of hashish, and thus should consider legalising it.

He explained that legalisation would actually mitigate its consumption, adding that things are more appealing when prohibited.

These calls, however, were soon met by social and governmental backlash, and the National Fund for Drug Control issued a statement declaring that the legalisation of hashish is a threat to social peace, citing hashish as one of the main causes of traffic accidents.

The hardline Salafist groups also rejected the calls, while Islamists expressed their opposition to the idea online, on the basis that Egypt is a Sunni country and hashish is forbidden. Additionally, a number of television programmes hosted professors of sociology, who reject the calls for legalisation.

Morocco was at the vanguard of Arab countries making serious calls for the legalisation of hashish. In fact, Morocco is in league with Afghanistan for the top spot in terms of cannabis production, according to a report published by the International Narcotics Control Board.

According to the Moroccan Ministry of Interior, there are about 90,000 families employed in the production of hashish in the north of the country.

A report by the US State Department stated that the rate of cannabis production in Morocco increased in late 2016, contributing a total of $23 billion to the gross national income.

There have been various calls for the legalisation of hashish in Morocco, at the forefront of which is Abdel Hakim ben Shamas, a leader in the opposition Parti authenticité et modernité (PAM).

He cited the fact that there are certain low-income areas that live off the revenues from growing hashish, noting that the residents of those areas suffer from harassment. He added that legalisation would help ameliorate the living conditions of rural residents. 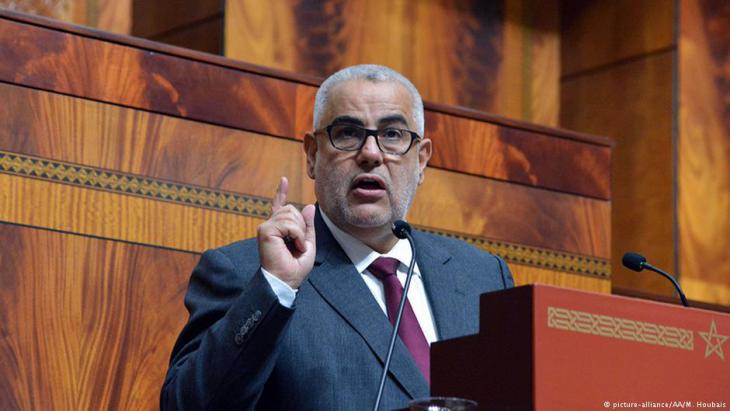 A resounding "no" to the legalisation of cannabis in Morocco: former Moroccan Prime Minister Abdelilah Benkirane rejected calls in the Moroccan parliament for legalisation of the consumption of cannabis. "Morocco is in league with Afghanistan for the top spot in terms of cannabis production, according to a report published by the International Narcotics Control Board," writes Reda Ghoneim

One such resident of rural Morocco says that the nature of the earth does not allow for the cultivation of any crops other than cannabis, explaining that "the cultivation of this substance brings in more money for the residents than growing fruits and vegetables would, and it supports their livelihoods."

In response, former Prime Minister Abdelilah Benkirane, who belongs to the Islamist Justice and Development Party, rejected the calls for legalisation in the Moroccan parliament. His position came in response to a proposal put forth by the PAM, calling for the utilisation of hashish cultivation for medical and commercial purposes, and thus removing it from the list of contraband products.

At the time, Benkirane said: "I reviewed a study that affirms that only 2% of hashish is used for medical purposes," considering that the "legalisation constitutes the legitimisation of drugs and the destruction of the entire nation."

The Moroccan Coalition for the Medical and Industrial Use of Cannabis denounced Benkirane's position, calling for another study to be conducted. However, Benkirane left his position in the government, and the calls for legalisation have continued, but failed to materialise into action.

Tunisia joined the list of states in which discussions of legalisation gained traction after their 2011 revolution, which toppled the former president, Zine El Abidine ben Ali.

Activists pushed for keeping the proposals, as the number of individuals convicted on drug abuse charges rose. Human Rights Watch documented the issue, stating that "some prisons were at 150 percent capacity. A person convicted of smoking a joint, therefore, has to share an overcrowded cell with persons imprisoned for serious crimes."

Last January, the Tunisian Minister of Justice declared before parliament that 6,700 prisoners were being held for drug abuse in 2016.

Shehab, a pseudonym chosen by a young Tunisian, says that he has been smoking hashish for years, and was arrested for possession of "half a joint". He was sentenced to one year in prison and ended up sharing a cell with murder convicts.

"Why did I have to go to prison? Why was a year of my life taken from me? Why can't they legalise it, the way it has been legalised in Europe? This is a source of income, just like alcohol." 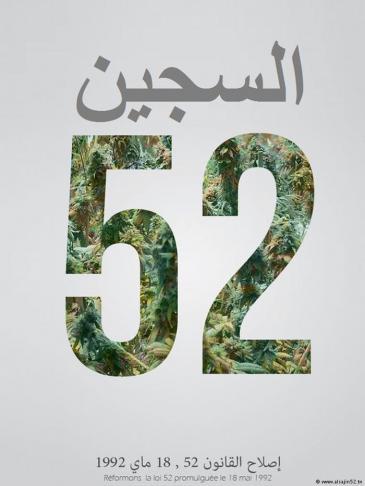 Symbol of the campaign to decriminalise hashish in Tunisia: the Tunisian Law No. 52 from the year 1992 obliges courts in the country to impose prison sentences of at least one year for the consumption or possession of illegal drugs, including cannabis and hashish

Shehab agreed with a number of activists to start a hashtag on Twitter towards the end of 2016, calling for a law organising hashish use. However, the hashtag did not attract much attention.

The Tunisian Law no. 52 of the year 1992 obliged courts to issue prison sentences of at least one year for use or possession of illegal drugs, including cannabis or hashish. Repeat offenders were sentenced to five years in prison.

Tunisian President Beji Caid Essebsi has expressed his opposition to the extreme penalties, promising to amend the laws during his election campaign. Thus at the end of last April, the Tunisian parliament voted to amend the law on penalties for drug use.

The amendments allow judges to make personal judgment calls, which means that prison time can be avoided for drug-related offenses, taking into account mitigating circumstances.

Following the amendment of the law, activists are using the momentum for legalisation. One of the activists said on social media: "We are seriously considering launching a campaign to urge the government to legalise hashish. We will provide testimonies from international medical organisations that indicate that hashish does not cause addiction."

He adds that the economic crisis currently affecting Tunisia could be a contributing factor to pressuring the government, as legalisation would provide significant additional revenue.

In 2014, MP and political leader Walid Jumblatt called for permitting the cultivation of cannabis, as it would bring in capital to support the economy. He pointed to the period of civil war (1975–1990), during which cannabis cultivation flourished, bringing in millions of dollars before it was stamped out near the end of the war.

In light of the country's meagre resources, previous Minister of Tourism Fady Abboud proposed legalisation for medical purposes and for exportation, since the state had failed to snuff out its cultivation. A number of hashtags emerged thereafter, including one which stated that if hashish were to be legalised, the state debt would be repaid within a year.

Cannabis cultivation has flourished in Lebanon over the past five years, according to news reports. Farmers refuse to give up the trade, due to its profitable nature compared to other produce.

In contrast, economic experts have rejected the calls for legalisation, reasoning that no matter how high the revenues from taxes would be, the cost of legalisation would be higher, and the adverse effects on youth productivity and health would outweigh any benefits.

Home
Print
Newsletter
More on this topic
Drug dealing in Lebanon: At home with a drug baronAfghanistan: Drugs problem deeply ingrained in societyDrug trafficking in Tajikistan: Fighting a losing battleDrug economy in Afghanistan: "It's a matter of development, not counter-narcotics"
Related Topics
Drugs, Economy, Health
All Topics

People in Arab countries have been talking more openly about sex and sexuality for some time now, especially on social media. And for the first time ever, they have the vocabulary ... END_OF_DOCUMENT_TOKEN_TO_BE_REPLACED

Alaa Abd el-Fattah, arguably Egypt’s most prominent democracy activist, has just been handed another lengthy prison sentence. Despite this, a book of his writing has recently been ... END_OF_DOCUMENT_TOKEN_TO_BE_REPLACED

A prominent rights group in Egypt, the Arabic Network for Human Rights, is ending operations just as the country braces for a controversial NGO law. Is this the beginning of the ... END_OF_DOCUMENT_TOKEN_TO_BE_REPLACED

Moncef Marzouki was Tunisia's first democratically elected president after the fall of dictator Ben Ali. Today he is the most prominent critic of increasingly counter- ... END_OF_DOCUMENT_TOKEN_TO_BE_REPLACED

Asef Bayat, professor of Sociology at the University of Illinois, Urbana-Champaign, has been studying revolutions and how they affect people since 1979. In his recent book, " ... END_OF_DOCUMENT_TOKEN_TO_BE_REPLACED

Every year in December, the team at Qantara.de takes a look back at the articles that proved most popular with our readers. This year is no different. Here is a run-down of the ... END_OF_DOCUMENT_TOKEN_TO_BE_REPLACED
Author:
Reda Ghoneim
Date:
Mail:
Send via mail

END_OF_DOCUMENT_TOKEN_TO_BE_REPLACED
Social media
and networks
Subscribe to our
newsletter