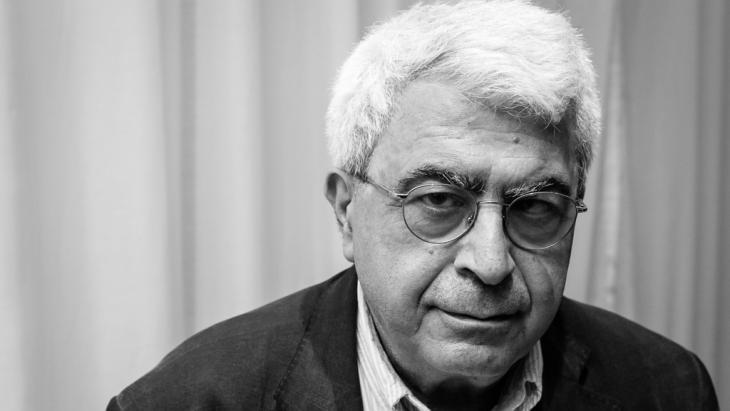 For years the Arab intellectual elite looked to Lebanon, coveting its atmosphere of freedom. Feigning the non-existence of repression, Beirut welcomed intellectuals from across the region, published their works and celebrated them. Yet, even following the murder of Lokman Slim, the powers that be are incapable of controlling everything. An essay by Elias Khoury

What’s the difference between an assassination and an execution? This is the headache of a question facing Lebanese; it existed before Lokman Slim was killed, and it looks likely to preoccupy people for a long while to come. The question goes to the heart of the cultural scene and the intellectuals in Lebanon, Egypt and the Arab Levant.

In the past, we, as Lebanese, used to feel that our educated friends in the Arab Levant regarded us with admiration and envy, because of the freedom we enjoyed in Lebanon. A historian could write an almost complete narrative of Arabic culture by looking at the relationship between the educated elite, prisons and exile. Yet when it came to describing the situation in Beirut, he would have to change his approach, admitting that Beirut is different, by dint of its freedoms and its capacity to embrace Arab intellectuals fleeing persecution and oppression.

There is no equivalent in the Lebanese narrative to the barbaric prisons that the Syrians experienced with Tadmur, the Egyptians with al-Wahat, the Iraqis with Nigret al-Salman and Abu Ghraib, the Libyans with Abu Salim, or the Moroccans with Tazmamart.

Since the emigration of educated Lebanese at the end of the Ottoman Empire, the country has not seen a similar exodus prompted by fear. Rather, the shift of some Lebanese intellectuals towards the French language, as in the case of Georges Shehadeh and Fouad Gabriel Nafaa, for example, was not an escape, but rather a stepping stone. A way into a different Beirut that revealed to them another unique facet of the city's character.

From repression to celebrity

If Lebanese writers once experienced repression or oppression, it only paid dividends to their wealth of experience, even turning some of them into celebrities – without affecting their creativity. From Laila Baalbaki and her collection of stories "The Spaceship of Tenderness to the Moon" to Sadiq Jalal al-Azm and his "Critique of Religious Thought", or Abdullah al-Qasimi through to "The Garden of the Senses" by Abdo Wazen. Political repression during this period arguably reached its peak in 1969, when Nidal al-Ashqar and Roger Assaf's play "Majdaloun" was prevented by force. Without further ado, the actors showed it in the "Horseshoe Cafe" on Hamra, the famous street in the neighbourhood of the same name. Feigning the non-existence of repression, Beirut welcomed intellectuals from across the region, publishing their works and celebrating them. 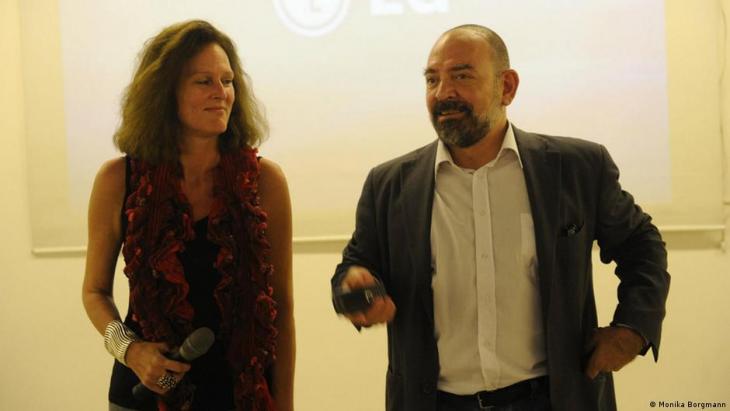 To this day, key events from the Lebanese civil war still have not been addressed. Two presidents, a prime minister and a number of other politicians were assassinated. These events took place against a backdrop of brutal political and sectarian cleansing, such as the Sabra and Shatila massacres. Lokman Slim and his German wife Monika Borgman had dedicated themselves to the reappraisal of recent Lebanese history. Founding the archive "UMAM Documentation & Research in 2004, their aim was to close the gaps in the country's collective memory. Following Slim's assassination in February 2021, Monika Borgmann intends to continue the project

What we read in Lebanon about oppression experienced elsewhere made us shudder. Who can forget Faraj Bayraktar in "Betrayals of Language and Silence", Mustafa Khalifa in "The Shell: Memoirs of a Hidden Observer" and Mohammad Ali al-Atassi's film "Cousin". Bayraktar and Khalifa wrote about terrifying experiences in Tadmur prison, whilst "Cousin" introduced us to Riad al-Turk’s ordeal in solitary confinement. The latter reminded us of Farajallah al-Helou’s arrest and the burning of his fingers in acid by the security forces. Who can forget "East of the Mediterranean" by Abd al-Rahman Munif and the outpouring of prison stories, which has made modern Arabic literature one of the last bastions of this genre in the world?

Beirut was always within touching distance of political repression, but always, as it were, rebelled against it. Even the assassinations of two prominent journalists, Kamel Mroueh and Riad Taha, despite their horror, remained exceptions. But things took a different turn with the outbreak of the civil war.

With its sectarian militias, the civil war led to two kinds of operations which signalled the end of freedom of expression: kidnappings based on a person’s religious affiliation and assassinations. Kidnapping was the beginning of the savagery. Thousands of kidnapped people disappeared without a trace. More than thirty years after the war’s end, we still don’t know anything about the fate of some seventeen thousand people who were taken captive and buried in places unknown.

As for assassinations, they became one of the features of the struggle for power. Two presidents of the republic and a prime minister were assassinated, as well as a host of other political leaders. These activities took place against a background of political and sectarian cleansing, from Tal al-Za’atar to Damour, from Sabra and Shatila to the "War of the Mountain".

The war was one way in which the Lebanese mirror began to reflect the wider Arab world. Freedom began to wither, and the slow decline of the Lebanese press set in after Lebanon fell under Syrian hegemony. This downward trajectory reached its nadir with the kidnapping and brutal execution of Salim al-Lawzi, the owner of al-Hawadith magazine, on 25 February 1980, after they had burned his fingers in acid.

One turning point of the long war was the series of killings of left-wing intellectuals such has Hussein Mroueh, Hassan Hamdan (a.k.a. Mahdi Amel) and Suhail al-Tawila. It was a time when the Syrian plan to control Lebanon moved up a gear and became a full-on attempt to destroy the Left and subjugate Beirut. The festival of death, which began with Rafik Hariri’s assassination on 14 February 2005, took on even more tangible form after the Syrian withdrawal from Lebanon. The country became more like an execution wall.

On 2 June 2005, Samir Kassir was assassinated; three weeks later, on 21 June, George Hawi was killed. The assassinations that had begun on 17 February 1987 with Hussein Mroueh had come full circle. After Kassir and Hawi’s murders, Beirut became the execution capital. Journalists, politicians, and security officials who opposed Syrian and Iranian hegemony were killed, and the assassinations did not stop until 2013. 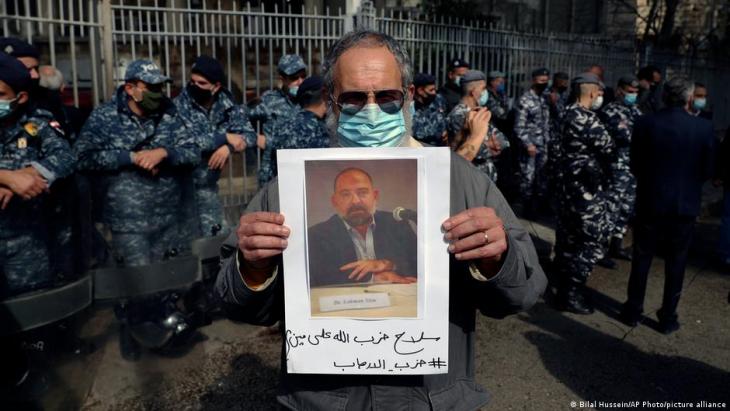 On the evening of 3 February 2021, Hezbollah critic Lokman Slim left Beirut to drive south. Friends and family never saw him alive again. His body was discovered in his car near Nabatieh. Previously, the activist had received threats from Shia party circles. So far, the Lebanese judiciary has remained silent on the incident, and according to Elias Khoury, this will remain the case. "No-one expects to see the investigation produce any results. Even the word investigation has become absurd. So if this killing is not an assassination, what is it, then? It is an execution," writes Khoury in his essay. With its weapons and its politics, Hezbollah is the strongman, but it is unable to impose its authority on all areas of life. "Whoever cannot control a country's culture in all its facets, will not be able to tame its society"

"Why didn't they lock him up?"

Has Lokman Slim’s murder – or, more accurately, execution – thrown Lebanon back into this cycle of death? The day after Samir Kassir was killed, we went to the airport to meet his widow, Giselle Khoury, who had been on a business trip abroad. The first word that she said upon her arrival was: "Why did they kill him? They could simply have locked him up. Why didn't they lock him up?"

A spontaneous utterance, from a heart wounded by grief, and one that sums up the Lebanese story: we are the land of militias and we hold the gun above the judiciary. Nowadays we covet our Arab brothers and their miserable prisons, and our ambition is to face prison rather than death. But with the increasing brutality of the military juntas, the old Arab methods of repression no longer apply. The regimes are becoming like militias, except that they outdo them in terms of having industrial-scale killing machines.

The killing we have seen in Lebanon is not really assassination. Yes, we may tremble at the word in Arabic, after all its linguistic roots refer to the ghoul, the man-eating creature from mythology. And yet, an assassination is actually a limited and subjective process that ends as soon as it is done. In contrast, here in Lebanon we face an unending process, in a country that is incapable of even naming the assassin, let alone punishing him. The Lebanese judiciary has remained silent until now, and things won’t change. No-one expects to see the investigation produce any results. Even the word investigation has become absurd. So if this killing is not an assassination, what is it, then? It is an execution.

An execution without due process. Not even a nominal process. An execution demonstrative neither of power nor of impotency. With its weapons and its politics, Hezbollah is the strongman, but it is unable to impose its authority, and whoever cannot control a country's culture in all its facets, will not be able to tame its society.

Everyone is calling for an investigation into Lokman Slim’s murder, and yet everyone knows that a proper investigation is impossible. Who is fooling whom? Why is the state, which arrests and terrorises protesters across Lebanon, impotent and mute in the face of a reported death?

On the evening of 3 February 2021, Lokman Slim was kidnapped and his body was dumped in the dead of a long Lebanese night. It was an execution without witnesses; because the only witness would become the martyr.

Elias Khoury, born 1948 in Beirut, is a novelist, playwright, literary critic, editor and lives in Beirut. He is one of the leading writers and intellectuals in the Arab world and author of ten novels and three plays.

Palme d’Or winner "Boy from Heaven" is a classic crossover film in which cultural elements are mixed together in haphazard and random fashion. Shady Lewis Botros bemoans the ... END_OF_DOCUMENT_TOKEN_TO_BE_REPLACED

In Doha, Arabs from Morocco, Tunisia, Egypt and Algeria are gathering to celebrate the first ever FIFA World Cup to be held on Arab soil. The criticism from Europe? Over the top, ... END_OF_DOCUMENT_TOKEN_TO_BE_REPLACED

November 2022 sees the Arab world firmly in the spotlight with the COP27 in Egypt and the FIFA World Cup in Qatar. Public trust in MENA governments is weak, thanks to their ... END_OF_DOCUMENT_TOKEN_TO_BE_REPLACED

COP27 in Sharm el-Sheikh is turning into a PR disaster for Egypt’s military regime. Instead of praise for the host, the news is full of solidarity for imprisoned activist Alaa ... END_OF_DOCUMENT_TOKEN_TO_BE_REPLACED

END_OF_DOCUMENT_TOKEN_TO_BE_REPLACED
Social media
and networks
Subscribe to our
newsletter