Arab regimes have deliberately fought off the other possibility, namely that of a liberal-civil order. Arab despots have never worried that much Islamists, knowing that in case of any doubt, the West would opt for them as the "lesser evil".

The authoritarian reinstatement of prior conditions that has taken place in many flux-nations since 2013 does not provide any kind of answer to the huge challenges of the present and the future in Arab nations. 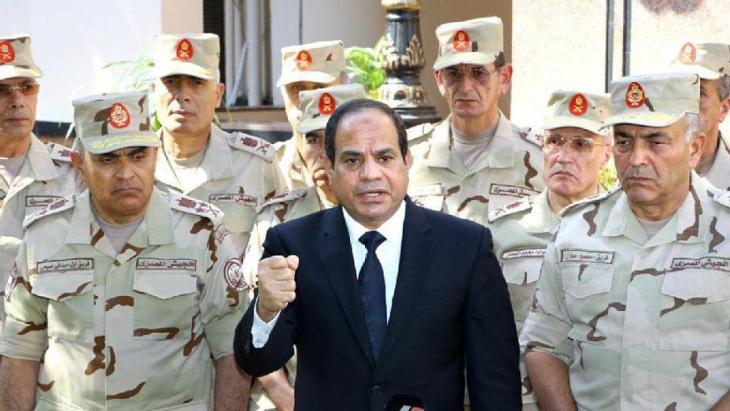 Combining authoritarian rule and military might: following the failure of the Arab Spring, almost all "republics of fear" have not only become economically weaker, but also more repressive

This development is worrying inasmuch as the socioeconomic conditions that ultimately led to the Arab revolutions have dramatically worsened: today one in every three Arabs is under 23 and in the next 20 years the Arab world is going to need 50 million jobs – and no one knows where these are going to come from. In the context of this, it can be assumed that without far-reaching political and economic reforms, nations such as Egypt will soon be ungovernable.

This is precisely where western efforts should be focussed: Germany and its partners need to attach conditions to their offers of aid. These should include progress (however small) in stamping out widespread corruption, in the implementation of economic reforms for the middle classes and in the bolstering of civil society and the rule of law.

In the western capitals of the world, we should be distancing ourselves from the illusion of stability in apparently robust repressive states. After all, in reality, tyranny is never stable.

The past enthusiasm of the Egyptians lives on in the Iraqis of today. But just as they were nine years ago in Cairo, current prospects in Baghdad are dim. A comparison by Birgit ... END_OF_DOCUMENT_TOKEN_TO_BE_REPLACED

Insults directed against Egyptian President Abdul Fattah al-Sisi have been particularly prominent among the hundreds of chants by Arab protestors in Algeria, Sudan, Iraq and ... END_OF_DOCUMENT_TOKEN_TO_BE_REPLACED

Political analyst Taqadum al-Khatib argues that Egypt can, in co-ordination with its European partners, develop a common vision to solve the complex conflict in Libya. For this to ... END_OF_DOCUMENT_TOKEN_TO_BE_REPLACED

The upheavals of the past year in the MENA region are arguably as momentous as those of the Arab Spring in 2011. Yet perhaps the biggest difference is that our interest seems to ... END_OF_DOCUMENT_TOKEN_TO_BE_REPLACED

In 2019, the long-running Penguin Classics series released its first novel translated from Arabic: Tawfiq al-Hakim’s "Return of the Spirit", conveyed into English by William ... END_OF_DOCUMENT_TOKEN_TO_BE_REPLACED