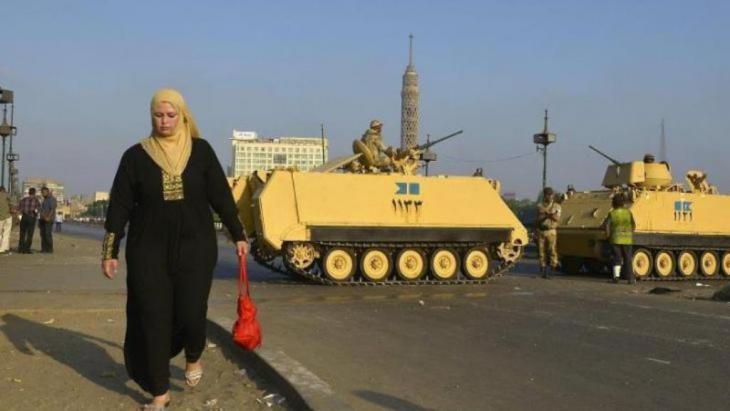 Given their poor records in so many areas, how is it that authoritarian regimes in the Arab world manage to cling so successfully to power? In this essay, Amr Hamzawy examines how the ruling elites in the countries of the Arab spring use a mixture of oppression and fear of chaos and disorder to nip any demands for democratic change in the bud

Current ruling regimes in the Arab world reveal an important paradox inasmuch as they have faced only limited challenge from their respective societies despite the blatantly poor performance of the social and economic elite and their dismal track record.

Outside the Gulf region, poverty, unemployment and illiteracy rates in the rest of the Arab world are extremely high, while at the same time, standards of public services in vital sectors such as school and university education, health and social security for the low-waged, the poor and the elderly plumb new depths.

These authoritarian regimes still fail to stop the spread of corruption, nepotism and the abuse of public office, while there is an almost complete absence of transparency and accountability – principles that ought to govern the performance of both public and private institutions.

We face autocratic regimes that lack legitimacy in any true developmental sense and bear no resemblance to what might be considered good governance. Instead, narrow elites control the state, society and citizens with an iron fist. No real competition is allowed in the political arena, and the rights of citizens are variously restricted in terms of freedom of expression, freedom to organise and freedom to participate in public life. Despite this, the rulers face no real or significant challenge from society, and the cost of controlling the masses is minimal.

The paradox therefore lies between social and economic incompetence and the illegitimacy of Arab regimes and the easy, low-cost means by which they survive. 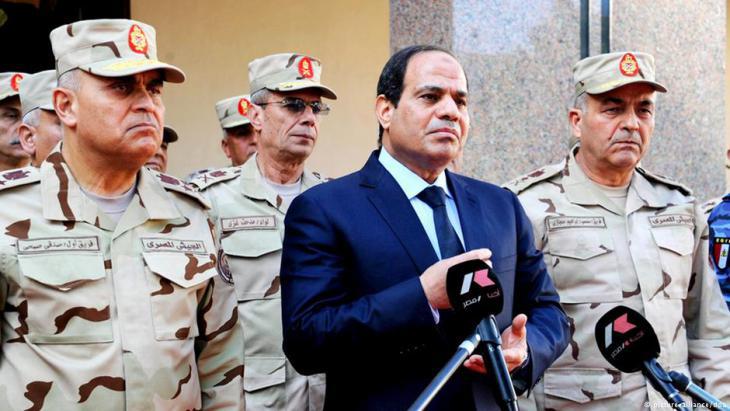 The army and security forces shore up Egypt's new authoritarian system: "Today, the military, security and intelligence agencies have the final say in determining the direction of the ruling elites and putting policy into practice, thereby advancing their influence over other executive bodies, be they ministries or specialised institutions," writes Amr Hamzawy. Pictured here: Egypt's President Abdul Fattah al-Sisi surrounded by commanders of the Egyptian army

To analyse this paradox, a number of approaches from the fields of political science and political sociology can be invoked.

The first approach is to look at the actions of the military, security and intelligence agencies, which have become increasingly embedded in government and whose financial allocations have been consuming a constantly rising share of national budgets. The role of the security apparatus is no longer restricted to the tracking and monitoring of the opposition and the systematic use of oppressive measures against those seen by the ruling elite as an existing or potential threat to its rule. Indeed the current security set-up goes way beyond this and now encompasses the direct administration of a number of key social and political portfolios. This begins with limiting the activities of civil society organisations and trade unions and restricting the freedom of the press; it extends to the nature and detail of the electoral systems at both regional and national levels, as well as the division of electoral constituencies, and it goes as far as amending constitutional articles and laws regulating political and civil rights.

Today, the military, security and intelligence agencies have the final say in determining the direction of the ruling elites and putting policy into practice, thereby advancing their influence over other executive bodies, be they ministries or specialised institutions. The security apparatus has expanded to include personnel in the bureaucracy of the state, thus establishing a "soft" intelligence network which is all-encompassing and pervasive, and this makes it difficult for citizens to organise in order to confront the tyranny. Indeed, it is easier for the elites to use such networks to prolong their tyrannies, as we saw in Algeria, or to re-establish themselves, as happened in Egypt after 2013. 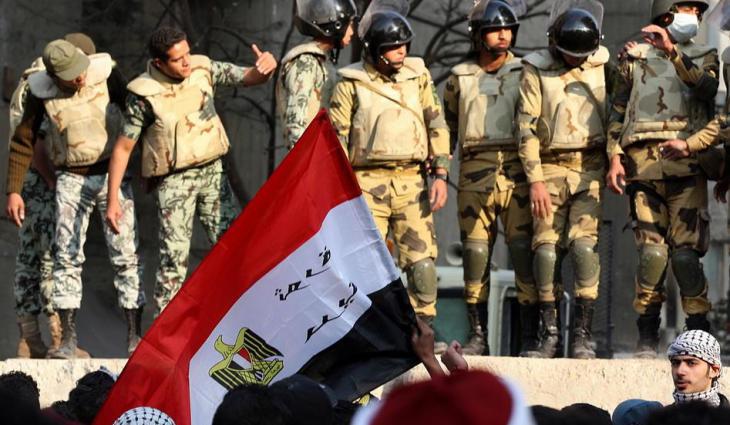 "The role of the security apparatus is no longer restricted to the tracking and monitoring of the opposition and the systematic use of oppressive measures against those seen by the ruling elite as an existing or potential threat to its rule. Indeed the current security set-up goes way beyond this and now encompasses the direct administration of a number of key social and political portfolios," writes Amr Hamzawy. Pictured here: soldiers watch protests on Tahrir Square in Cairo

March through the institutions

Having analysed the way the security establishment has become embedded in the state, a second approach seeks to explain the inclination of the Arab ruling elites towards personalising power and the tools of the trade around a small group with similar interests; the members of such groups are bound together by essential alliances that do much to reduce the possibility of conflict among themselves. In some contemporary situations, this has led to the collapse of autocratic regimes, either by trailing democratic change or by acting as a catalyst to it.

Behind a seemingly pluralistic facade of some Arab elites, their military, security and civil structures reveal a remarkable continuity in the true practitioners of power. The structures are manned predominantly by the older and the middle-aged, albeit with a growing sensitivity to gender parity, which has led to some women rising to higher executive levels. Moreover, the senior officials rotate in and out of different branches of government and political life in an orderly fashion.

While there is a limited number of influential families, there is no ministerial team, army or intelligence rank that does not contain names belonging to these families, as we see in Jordan. In Morocco, well-known figures have held power for a very long time, and they can be found in vital legislative, executive and party positions, which they almost never leave. And in Egypt, one can track the rotation of these individuals over the decades from one appointment to the other according to the elite's reading of the circumstances and privileges at any given time.

Fear of chaos and anarchy

The third approach to explaining the endurance of autocracy in the Arab world centres on the ready availability of the ranks of the elite, despite their lack of legitimacy and their failure to satisfy popular expectations. They maintain a persuasive official rhetoric that leads citizens, notwithstanding their harsh realities, into preferring the continuation of failed rulers, while rejecting demands for democratic change.

The elite use religious authorities and the media – be they run by government or under de facto government control of their daily operations – to produce a continuous sense in the collective memory that the demand for change means a threat to public order and a precursor to the total collapse of the country. This prevents the genuine grievances of citizens from being directed at the establishment or towards popular action beyond the spontaneous and limited protests which can be seen in some Arab countries.

There is no doubt that the official rhetoric about the "perils of change" has appeal, and this is partly connected to the repeated breakdown of public order and of republican states such as Syria, Libya, Yemen and Iraq. It is also connected to the failure of the opposition, which has adopted slogans about democracy and human rights, but which needs to practice what it preaches. Likewise, there is the inability of the opposition to draw up a clear programme for the change they desire in a way that reassures citizens. After all, the hardships the people have suffered make them habitually wary, and their experience teaches them to protect the little they have from future disruptions which might remove even that.

Amr Hamzawy is a prominent writer, human rights activist and political scientist from Egypt. After the overthrow of President Mubarak in 2011, he became chairman of the Egypt of Freedom Party, which became part of the opposition group known as The Revolution Continues Alliance. In 2012, he was elected to the Egyptian parliament as its member from the Cairo district of Heliopolis. He was also a member of the Egyptian National Council for Human Rights.

Two refugees detained in Egypt are facing deportation to Eritrea. The expulsion of the Eritreans, who have been incarcerated in Cairo for more than eight years, has been halted ... END_OF_DOCUMENT_TOKEN_TO_BE_REPLACED

International relations are shifting across the Middle East as regional powers adapt to America's retrenchment and China's growing influence. Although the region could become the ... END_OF_DOCUMENT_TOKEN_TO_BE_REPLACED

Germany's foreign policy is explicitly values-based. But what happens, Ralf Bosen asks, when democracy, the rule of law and human rights collide with the logic of trade and ... END_OF_DOCUMENT_TOKEN_TO_BE_REPLACED

Egyptian author Nadia Wassef talks about opening the first independent bookstore in her home country; and her latest book in which she celebrates books and booksellers. By Manasi ... END_OF_DOCUMENT_TOKEN_TO_BE_REPLACED

"The people aren’t ready for democracy" has been the constitutional basis for Arab tyranny, its favourite slogan and its sacred narrative for more than a century. Yet, asks Khaled ... END_OF_DOCUMENT_TOKEN_TO_BE_REPLACED

END_OF_DOCUMENT_TOKEN_TO_BE_REPLACED
Social media
and networks
Subscribe to our
newsletter