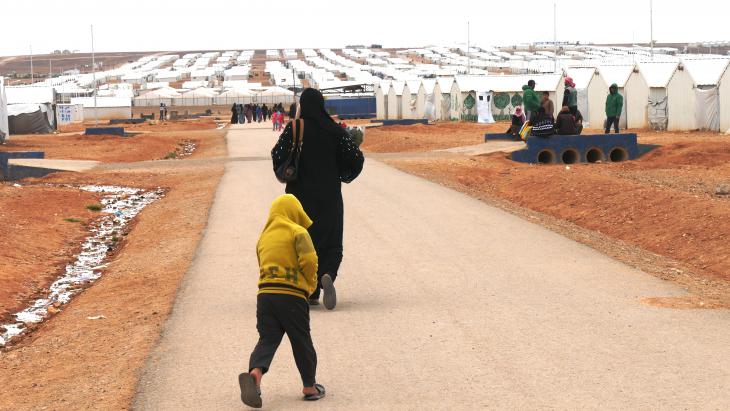 The Azraq refugee camp sits just off the highway, deep in the Jordanian desert. Lorries, on their way to Baghdad, thunder past along the so-called "road of death", the endless, pothole-pitted eastbound desert dirt track. Visitors are rare. By Dana Ritzmann

Ringed by barbed wire, the Azraq camp is around two hours' drive from Amman. Set up in 2014, it is the second-largest in the country, after Zata’ari in northern Jordan (80,000 Syrian refugees), and is currently home to around 51,000 refugees, according to the UN refugee agency.

Azraq still has room for more. Building has been going on since 2013, and its neatly laid out rows of tin huts stand ready to receive the next wave of arrivals from its war-torn neighbour. During the past two months alone, Azraq has taken in almost 20,000 new refugees, with more arriving every day.  People, fleeing from war, destruction and distress. People with nowhere else to go.

Malek Abdeen remembers the time before the refugees arrived. The young man has been working in Azraq for the aid organisation Care, which is responsible for much of the camp management, for the past two and a half years. Like the majority of his 40 or so colleagues, Abdeen commutes here every day from the capital Amman – a two-hour drive, undertaken twice daily, over dusty, rock-strewn roads – just to help out. Everyone here wants to help, to do something to make things a little better.

In contrast to the Zata’ari refugee camp on Jordan's northern border, which was thrown up, practically overnight after the outbreak of civil war in Syria in the spring of 2011 and grew rapidly in a random and uncontrolled fashion, Azraq was planned and constructed systematically – and has an almost model camp character. 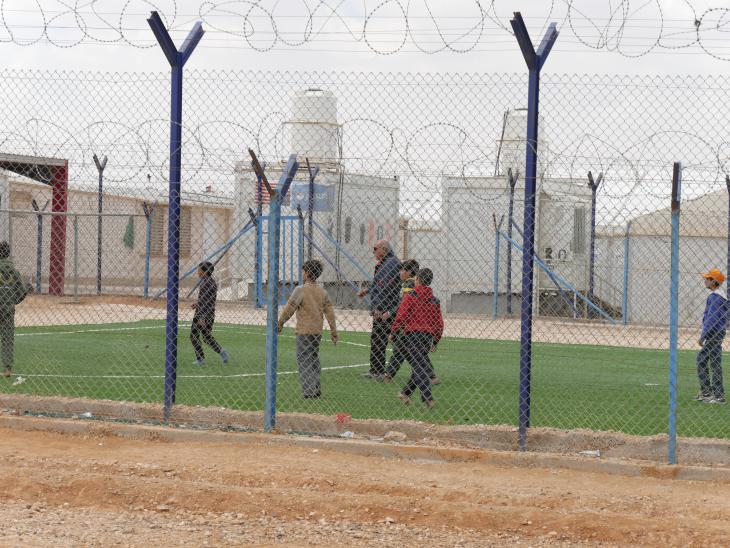 Visitors are a rarity: admittance to the camp is strictly controlled. Only those who are registered, or have long-term permission, may enter the camp. We, too, in spite of our very official looking letter of invitation, complete with royal crown letterhead, had to wait outside the barbed wire fence for a good hour before being allowed in

Two of the four residential districts in the camp even have so-called community centres, complete with recreational and educational rooms, a nursery and reading corners. There is even vocational training on offer. The sewing class is currently busy preparing to put on an exhibition and the temporary beauty salon is always packed, especially on Thursdays, when the budding beauticians and their friends are in demand to do the make-up for those among the young women who are preparing to get married. It is a colourful and happy scene – and a rather unlikely one – in this desolate desert setting.

Actually it is more like a prison here, says Agathe Simonis, from the Goethe Institute, who, along with volunteers, regularly organises reading and art activities for the camp children. The refugees are only permitted to leave the camp for three days once every month.

Even then, the next town is more than 20 kilometres away and transport facilities non-existent. So the daily round is restricted to the distance from one's own hut to the well at the end of the row, to the supermarket, two kilometres walk away, or to the little souk that recently opened up near the mosque.

No one knows how long the huts will be left as they are. One hears mutterings of discontent among the refugees at the prospect of them maybe being turned into more permanent housing. After all, the people here are all hoping to be able to go back home soon. Syrians and Jordanians have a lot in common. Their Arabic dialects and their cultures are also rather similar. Nevertheless, the two countries have been separate nations since the end of the colonial period, three-quarters of a century ago, each with its own distinct customs and traditions.

Even though Syria was regarded as a relatively secular country, many of the people now arriving at the camps are extremely conservative and religious. As far as is possible, the men and women are strictly segregated. It wasn't intended to be this way at the beginning, explains project leader Malek Abdeen, it was something demanded by the refugees themselves. 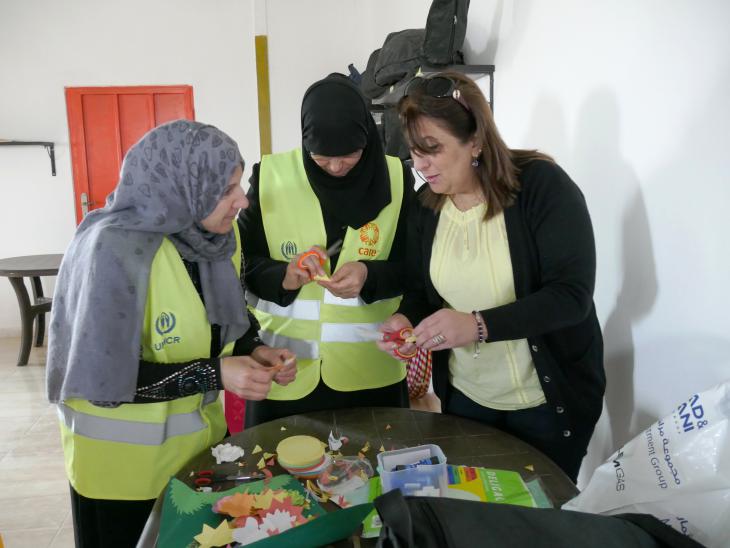 Azraq Refugee Camp is managed by the Jordanian authorities through the Syrian Refugee Affairs Directorate (SRAD), in coordination with the United Nations High Commissioner for Refugees (UNHCR). In total, 19 agencies are involved in addition to the Government in the provision of protection and assistance to Syrian refugees in the camp

This explains why the small fitness room, the venue for Zumba courses and treadmill training in the mornings, is now closed – because, at the moment, the large sports field adjacent to it is hosting a men's football tournament. Social worker Duaa explains that each potential activity is discussed in advance to find out whether there is any interest in it and then to decide how it can best be introduced into the time schedule to suit the everyday family life of the camp.

The preschool sessions are always busy, with places available for children practically from the day they are born. It is just not done for men to look after the children, explains Duaa. If a mother has a doctor's appointment, or some other obligation, and there is no relative or neighbour available to look after her children, she can bring them to the volunteers to be taken care of until she returns.

The older children sing, have stories read to them, draw, paint, make things, write and learn to count. There is a puppet theatre with coloured chairs arranged around it, and a little corner for reading. Though school attendance is actually compulsory, the rule is not enforced in the camp. At least the children here all have the opportunity to get a little schooling, says Agathe Simonis of the Goethe Institute.

For the hundreds of thousands of refugee families living in the Jordanian cities, mainly in Amman and Irbid, it's a very different story; often the children there will have to go out and earn money to help their families get by. In such circumstances, schooling tends to take second place, even though parents in the Middle East tend to place a high value on education.

Some adults, too, join the children in their improvised English course, or regularly borrow books. If it were up to Malek Abdeen, the room next door, with its dark shelves and coloured plastic chairs, would soon be turned into a proper library. The Goethe Institute in Amman has promised to support the project and has already asked which books will be needed, and in which languages.

For the past year, Goethe Institute staff from Amman, along with numerous volunteers – including Syrian and Iraqi refugees, as well as Jordanians – have been regularly visiting the camps and schools and community centres in the larger cities, to look at and read books with the children. 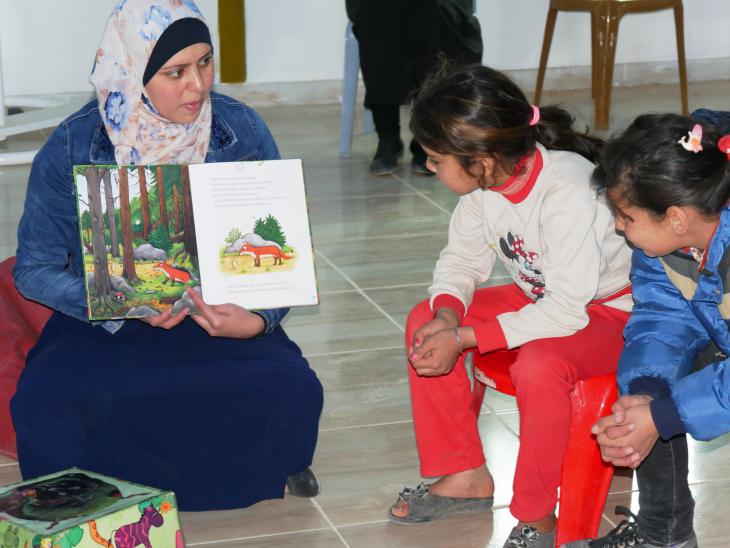 Model camp character: "The older children sing, have stories read to them, draw, paint, make things, write and learn to count. There is a puppet theatre with coloured chairs arranged around it and a little corner for reading," writes Ritzmann

As a result, the fearsome Gruffalo and the brightly coloured Rainbow Fish have become familiar characters in Azraq. Some episodes of a very popular German preschool children's television programme have also been translated into Arabic to entertain the camp children. Screenings on a small laptop during so-called "creative time" have been a big hit with the young audience, ensuring that the next visit of Agathe and her team is always eagerly awaited.

Visitors are a rarity here after all. Admittance to the camp is strictly controlled. Only those who are registered, or have long-term permission, may enter the camp. We, too, in spite of our very official looking letter of invitation, complete with royal crown letterhead, had to wait outside the barbed wire fence for a good hour before being allowed in.

Understandably, security is the top priority in Jordan. After all this small country is – and is very aware of its role as – the only haven of peace left between eternally troubled Palestine, civil-war-torn Syria and the chronically unstable Iraq. But of course issues of authority and power, not to mention the demonstration of both, are central when you have a fence such as the one around the camp at Azraq. Patience helps and smiling in the face of resentment. After all, we are only here for a visit.

Home
Print
Newsletter
More on this topic
Interview with Andre Bank, political scientist: "The refugees are part of Jordanian politics"Jordan and the Syrian refugees: Across a great divideJordan and the influx of refugees: The true Samaritans
Related Topics
Education, Policy on refugees and migration, Refugees, Syrian Civil War
All Topics

Any reconciliation between Turkey and Syria’s Assad regime would have disastrous consequences for many Syrians, explains Syria expert Kristin Helberg END_OF_DOCUMENT_TOKEN_TO_BE_REPLACED

Iraq bears the scars of decades of conflict and has seen its antiquities plundered, yet the House of Manuscripts' collection has managed to survive END_OF_DOCUMENT_TOKEN_TO_BE_REPLACED

As Syrian camps housing families of Islamic State fighters get more dangerous, there are calls to bring children out, even if the mothers don't want to go. The idea of separating ... END_OF_DOCUMENT_TOKEN_TO_BE_REPLACED

Morocco has taken the 2022 World Cup by storm, with the northwest Africans reaching the semi-finals for the first time in their soccer history. As the knockout match approaches, ... END_OF_DOCUMENT_TOKEN_TO_BE_REPLACED

The Islamic Republic has been unable to quell the civil unrest that erupted three months ago, after Mahsa Amini died after being detained for violating hijab rules. Now the ... END_OF_DOCUMENT_TOKEN_TO_BE_REPLACED

The Kurds are under attack from two sides: from Turkey, and from Iran. The situation in their territories in northern Iraq is becoming increasingly desperate. Birgit Svensson ... END_OF_DOCUMENT_TOKEN_TO_BE_REPLACED
Author:
Dana Ritzmann
Date:
Mail:
Send via mail

END_OF_DOCUMENT_TOKEN_TO_BE_REPLACED
Social media
and networks
Subscribe to our
newsletter