A Life of Repression

The situation for Baha'i in Iran has been deteriorating ever since the "Islamic Revolution" thirty years ago. Yet persecution has intensified under President Ahmadinejad's rule. By Katajun Amirpur

Baha'i calligraphy of the 'Greatest Name' : in Bahá'í belief the Greatest Name of God is 'Bahá', or 'splendour'

​​ Anti-Americanism, open hostility towards Israel, a legal system that does not grant men and women equal rights, and a doctrine that calls itself the "rule of the supreme legal scholar" have determined the official philosophy and actions of the Islamic Republic of Iran since the 1979 revolution.

The Baha'i faith grew out of Shi'a Islam, but has severed itself from its roots. Although the Baha'i recognise Mohammed as a prophet, they do not regard him as the seal of monotheistic prophethood as other Muslims do.

Instead they believe that the divine revelation entered a new phase with Bahaullah, who died in 1892 and is regarded as a manifestation of God. The central dogma of Shi'a Islam is the belief in the return of the mahdi, comparable to the Jewish messiah in eschatological terms. For the Baha'i, however, the mahdi has already returned in the form of the founder of their religion. This view is religious sacrilege for the Shi'a.

In 1950s and 60s Iran, the intellectual elite and young people were particularly fond of the modernist ideas of the Baha'i, including equal rights for men and women. Concerned over the growing influence of the Baha'i at that time, Shaykh Mahmud Halabi founded the ostensibly charitable organisation Hojjatieh. Halabi and his group saw the Baha'i as a major threat to traditional Shi'a values.

Their main aim was to persecute the unfaithful, which meant primarily the Baha'i, giving Hojjatieh the popular nickname of "Anti-Baha'i Society". Hojjatieh gained a great deal of support from most Shi'a authorities for their persecution of the Baha'i, and even the then Shah Mohammed Reza Pahlevi, otherwise seen as a friend of the Baha'i, gave the organisation free hand whenever he needed the support of the Shi'a clerics. 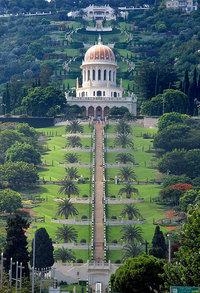 Important pilgrimage site for the Baha'i: the shrine of the religion's founder Bab in Haifa, Israel, is a UNESCO world heritage site

​​ Fairly passive in the political sphere, Hojjatieh had found an arrangement with the ruling political regime under the shah, avoiding open opposition to the largely anti-clerical atmosphere at the time. It concentrated on taking over key positions and thus gradually Islamicising the system from within. This strategy bore fruits, yet the revolution violated Hojjatieh's turf.

For although Hojjatieh was Islam-oriented, it was not in favour of Khomeini's ruling doctrine. In the early 1980s, the quietist Hojjatieh movement was forced to disappear. Its central agenda, however – persecution of the Baha'i – was adopted by the new government.

Particularly in the initial years after the revolution, the Baha'i suffered widespread persecution. Hojjatieh later made peace with the state doctrine and Khomeini himself, and its members are said to have gradually been incorporated into the ruling elite of the Islamic Republic of Iran.

Stubborn rumours have it that the figure behind this development is the current revolutionary leader Ali Khamenei, allegedly a long-term member of Hojjatieh. Another alleged influential member of Hojjatieh is Ayatollah Mesbah Yazdi, the mentor of the present president Mahmud Ahmadinejad.

In the thirty years since the revolution, the situation for the Baha'i has never been good. Yet over the past four years under Ahmadinejad's presidency it has deteriorated considerably. There have been arbitrary arrests, desecrations of graveyards, bullying of school children.

In May 2008, seven members of the informal leadership committee of the Baha'i were arrested. Six more Baha'i were arrested in January – including a woman who works in the Defenders of Human Rights Center, an office founded by the Nobel Peace Prize holder Shirin Ebadi. No official charges have been brought against the committee members to this day. The lawyer Shirin Ebadi, who represents the imprisoned Baha'i, has been denied any contact to her clients. 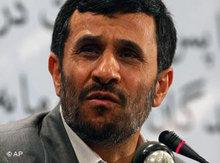 "For the radical forces to which Ahmadinejad belongs, the threats against Israel are a means to distract from domestic difficulties," writes Katajun Amirpur

​​ According to information from the German "National Spiritual Council of the Baha'i", forty people are currently under arrest. The main cause for concern is the amendment to criminal law that recently took the first legislative hurdle in Iran, and is currently waiting to be passed in the second instance.

If it is ratified, it would be legal to indict Baha'i for "defection from the faith" – and they could face execution. The Baha'i have also been feeling the bite of a heightened media campaign over the past few months. To add insult to injury, they also have to take part in re-education programmes.

Although there had been a few practical measures making life easier for the Baha'i under the reform-oriented president Mohammad Chatami, most reformers diligently avoided the issue.

Now, however, open resistance to the persecution of the Baha'i is raising its head within the Shi'a clergy. Grand Ayatollah Hossein Ali Montazeri, for instance, issued a controversial fatwa calling for the Baha'i to be finally granted full rights as Iranian citizens.

Montazeri was the designated successor to Khomeini, the founder of the state, up to 1989, when he was demoted shortly before the latter's death for his criticism of human rights violations. Despite his stance of opposition to the government, he is regarded as Iran's highest-ranking theologian.

Mahmud Ahmadinejad has repeatedly issued scandalous public statements on Israel and the Holocaust. The popular assumption is that Iran's Jews, who now number around 25,000, are also at risk. Yet Ahmadinejad appears to have no major problems with Iranian citizens of the Jewish faith.

Shortly after his statements on Israel prompted worldwide outrage, Iran's president visited Tehran's Jewish community in October 2006 and transferred a large sum of money to the Jewish hospital in Tehran.

For the radical forces to which Ahmadinejad belongs, the threats against Israel are a means to distract from domestic difficulties and present themselves on the international stage as fighters for the Palestinian cause. Their hostility towards the Baha'i, however, is founded on faith – and is therefore a matter of genuine conviction. It is a mystery why their persecution has not gained international attention.

Ahmadinejad's Messianic Fervor in Iran
Calculated Provocation
Iranian President Mahmoud Ahmadinejad turns to foreign policy issues – such as his anti-Israeli agitation – in order to divert attention away from domestic failures and to maintain the worldwide pressure on Iran. By Katajun Amirpur

END_OF_DOCUMENT_TOKEN_TO_BE_REPLACED
Social media
and networks
Subscribe to our
newsletter