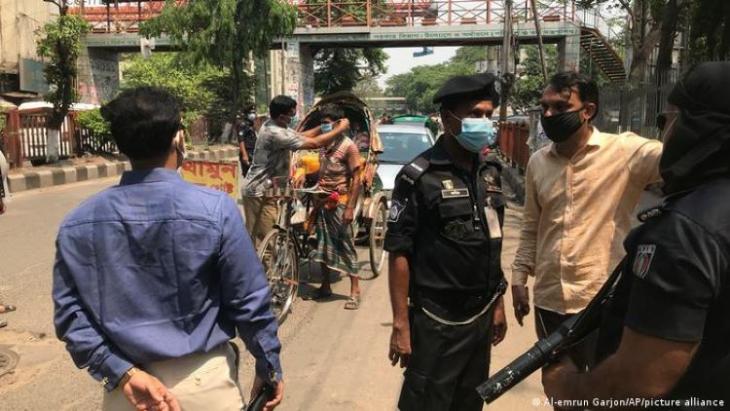 Bangladeshi authorities have detained more than 750 people for allegedly flouting the rules during a nationwide lockdown imposed to check the spread of the coronavirus, police said on Thursday.

The South Asian country reported that a record 143 people had died due to the virus during the past day on Thursday, the first day of week-long shutdown to slow the alarming rise in cases of COVID-19.

Offices and malls have been closed and transportation services suspended across Bangladesh.

Some 258 out of 755 detained were charged specifically for the defiance of the government order to stay indoors, Dhaka Metropolitan Police spokesperson Iftekhairul Islam said on Thursday night.

Most of the rest were eventually released, he said, adding that others were handed fines by mobile courts.

Islam said the traffic unit of police issued tickets against 274 motor vehicles for plying the streets in defiance of the virus restrictions.

The mostly empty streets in Dhaka and elsewhere were patrolled by army troops who have been called in to aid the civil administration, alongside other security forces.

"We have called upon the people to stay indoors to help improve the situation. Those who go out of their homes without valid reason will face legal action," said Mahtab Uddin, an officer from the Dhaka Metropolitan Police.

The prime target is to ensure social distancing, not to punish or fine anyone, he said.

The decision to implement the strict lockdown came after previous restrictions were only loosely enforced. Meanwhile the situation has deteriorated since arrival of the more transmissible Delta variant in the country last month.

The government stopped city buses and closed malls and tourist sites. It also banned large social gatherings to restrict people's movement earlier on Monday, a week after the suspension of long-haul buses, railway and ferry services.

However, tens of thousands of people tried to leave Dhaka and other large cities and headed for their villages ahead of the seven-day lockdown.

A country of more than 160 million, Bangladesh's embattled health care system has carried out fewer than 6.6 million coronavirus tests since the first cases of COVID-19 emerged in March last year.

More on this topic
Climate change in Bangladesh: The end of the line for climate migrants in DhakaCOVID-19 and the double mutation: At the heart of India's coronavirus firestormQantara dossier: Coronavirus
Home
Print
Newsletter
MoreAll Topics

END_OF_DOCUMENT_TOKEN_TO_BE_REPLACED
Social media
and networks
Subscribe to our
newsletter