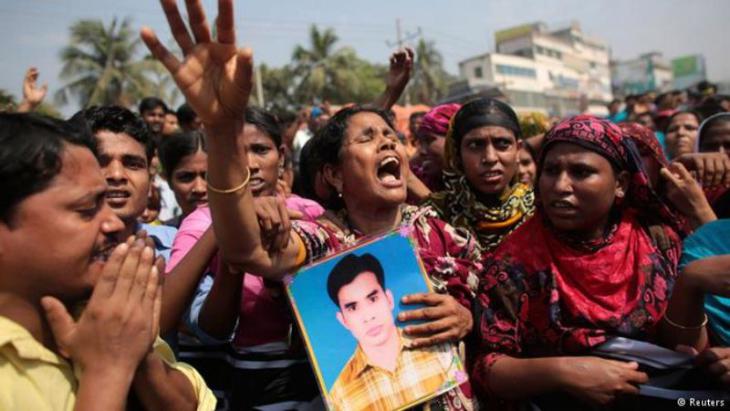 Five years after the biggest industrial disaster in Bangladeshʹs history, there appears to be no relief in sight for the thousands of survivors who are still suffering from severe physical and psychological trauma. By Arafatul Islam

This week Bangladesh marks the fifth anniversary of the deadliest disaster in the garment industry, which killed more than 1,130 and injured around 2,500 workers, when the building collapsed on the outskirts of Dhaka.

The building had housed five garment factories that manufactured clothes for many international clothing brands in Europe and North America. Investigations would later reveal that besides shoddy construction, the building had too many floors and too much heavy equipment for the structure to withstand.

"I canʹt even think of going near a multi-story building. I become scared and feel nervous. It reminds me of the horror I faced when the Rana Plaza building collapsed," says Lufta Akter, a 36-year-old sewing machine operator, who was on the buildingʹs 5th floor when disaster struck on 24 April 2013.   Lufta still vividly recalls how she was rescued a few hours after the collapse. She has since undergone extensive psychological counselling, but hasnʹt fully recovered and remains unemployed till now.

Lufta Akter is just one of many who have been left traumatised by the disaster. A recent survey by ActionAid Bangladesh, an international non-profit federation, reveals that nearly 48 percent of the survivors of the Rana Plaza incident are out of a job due to ongoing physical and mental conditions. The report stressed that apart from mental trauma, many survivors suffer from headaches as well as hand, leg and back aches, which left them unable to return to work in Bangladeshʹs multi-billion dollar garment industry.

Farah Kabir, the country director of ActionAid Bangladesh, says that a medium to long-term plan is required to rehabilitate the survivors, both in terms of health and economic well-being. "While survivors have been provided with different types of training, there is no follow-up on how they have applied the training, or whether they have been able to apply them at all," she says, adding that trade bodies can play a strong role in the economic rehabilitation of survivors.

Experts contend that the international clothing brands that produce their apparel in Bangladesh have a significant role to play in rehabilitating the Rana Plaza survivors. Bernhard Hertlein, a Bangladesh expert with the German newspaper Westfalen-Blatt, is of the view that a "protected factory" could be created for some of the victims, where they might work without the pressure of rapid "piece work", which is a type of employment in which a worker is paid a fixed rate for each unit produced.

"Once the survivors – having worked for some time at the protected factory – feel better, they can switch to normal factories where they will earn higher wages," says Hertlein.

Germany, after the U.S., is the second largest export destination for Bangladeshi apparel, with the South Asian country exporting garments worth € 3.8 billion to the EU nation in the fiscal year 2015-16. Many of the survivors of the Rana Plaza collapse were involved in producing garments for German brands. Hertlein stressed that the German companies had contributed reasonably to the €30 million fund created to support the victims.

But Lufta Akter received only a donation of a few hundred euros after the incident. She has yet to receive any compensation for the accident that has ground her life to a halt. "Since the accident I canʹt remember faces anymore, I forget things easily. I am paralysed by fear and memory loss," she said.  Her only hope is to get compensation, which could help her livelihood in the future.

As Qatar prepares to host the 2022 FIFA World Cup, the country has come under fire for its treatment of migrant workers, with some nations calling for a boycott of the contest. ... END_OF_DOCUMENT_TOKEN_TO_BE_REPLACED

Urban transport concepts in the global South, often promoted by organisations such as the World Bank, aim to encourage motorised private transport – at the expense of non- ... END_OF_DOCUMENT_TOKEN_TO_BE_REPLACED

Tents, mud and cold: refugees contend with miserable conditions in Bosnia & Herzegovina. With the European Union demanding that Bosnia accommodate the asylum-seekers, its ... END_OF_DOCUMENT_TOKEN_TO_BE_REPLACED

Authorities in Bangladesh started sending a first group of more than 1,500 Rohingya refugees to the isolated island of Bhasan Char, despite calls by human rights groups for a halt ... END_OF_DOCUMENT_TOKEN_TO_BE_REPLACED

French President Macron's statements that caricatures of Muhammad may still be published have triggered outrage in a number of Muslim states. Turkish President Erdogan is among ... END_OF_DOCUMENT_TOKEN_TO_BE_REPLACED

With the first COVID-19 case having been detected in the Kutupalong Rohingya refugee camp in Bangladesh, aid agencies are warning that without additional resources, there will be ... END_OF_DOCUMENT_TOKEN_TO_BE_REPLACED
Author:
Arafatul Islam
Date:
Mail:
Send via mail

END_OF_DOCUMENT_TOKEN_TO_BE_REPLACED
Social media
and networks
Subscribe to our
newsletter