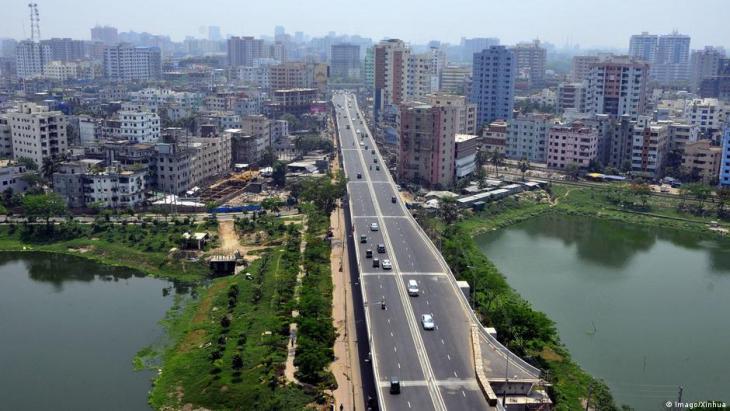 In 1971, Bangladesh seceded from Pakistan after a bloody civil war to become independent. But the events of that time are still largely taboo today. A reappraisal of this central chapter in Pakistan's history has yet to take place. Analysis by Mohammad Luqman

"So much affection – and yet we are mere strangers to you today. How many encounters will it take for us to be comrades again?" These are the opening lines of the oft-sung melancholy poem by celebrated Pakistani poet Faiz Ahmad Faiz. In 1974, Faiz visited the capital Dhaka for the first time since the civil war. His impressions and the trauma of the war that resulted in Bangladesh's secession and independence inspired him to write these lines.

On 16 December 1971, Pakistani General Abdullah Khan Niazi signed the capitulation live on camera, transferring nearly 90,000 Pakistani soldiers into Indian captivity. At the end of 2021, Bangladesh celebrates the 50th anniversary of its independence. What the Bengalis consider the birth of their nation represents for Pakistan the greatest military defeat in its history. Beyond the nationalist narrative of both states and the dispute over the actual number of civilian casualties, the human tragedy of this era has scarecely been addressed. In Pakistan, the subject remains taboo to this day.

The forced cancellation of a conference organised by the renowned Lahore University of Management Sciences (LUMS) in March 2021, which aimed to take a critical look at what happened, is typical. Just a few days after the event was officially announced, the university mysteriously called off the academic event.

Pakistan emerged as a nation state of Indian Muslims after the partition of British India in 1947. Provinces with a majority Muslim population were combined to form the new state of Pakistan. Since East Bengal was predominantly Muslim, it now became part of Pakistani territory, despite being almost 1500 kilometres away from the western part of the country. There was no land connection between the two territories. Moreover, East Bengal was the most populous region of the new state and was ethnically Bengali. Against this background, the central government in Karachi called for unity between the two sections of the country. 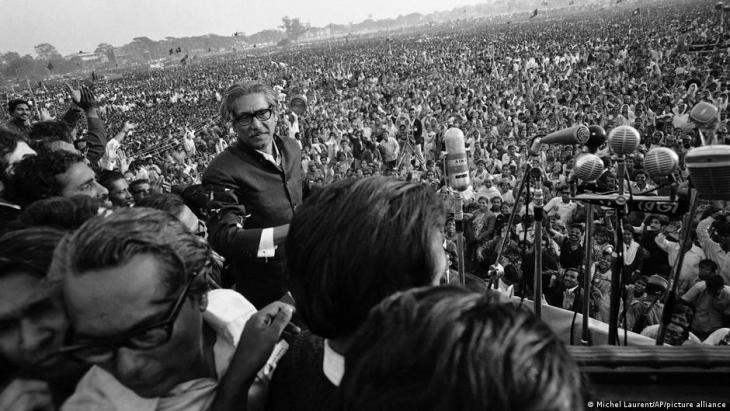 Mujibur Rahman at a rally with his supporters: the charismatic politician is widely regarded in Bangladesh as the "father of the nation". However, the birth of the new state was marked by a bloody civil war. On 26 March 1971, Rahman proclaimed the country's independence from Pakistan. Thereupon, the commander-in-chief of the armed forces in what was then East Pakistan gave the unspeakable order for Operation Search Light. It marked the beginning of the civil war, which is believed to have cost the lives of up to three million people. Rahman himself was assassinated in a military coup four years after independence

Initially, the idea of a single national language, Urdu, seemed the obvious means of achieving national unity. What the predominantly West Pakistani politicians in central government did not reckon with, however, was the strong resistance in East Pakistan to such a project. By adopting the idea of a single national language, the Bengalis feared the loss of their mother tongue and identity. In 1952, students demonstrated in Dhaka against the unpopular policy. A crackdown by the security forces resulted in student fatalities and injuries and there was rioting across the province.

Although Bengali would be recognised as an official national language a few years later, the unfortunate handling of the controversy had already laid the foundation for East Bengal's disaffection with Pakistan.

A plot by India?

Over the next few years repressive rule by successive central governments only increased the resentment felt by those in East Pakistan. In 1966, the charismatic Mujibur Rahman (1920-1975) became party chairman of the Awami League and proposed far-reaching autonomy for East Pakistan in a so-called six-point plan. In the new capital Islamabad, the military government saw the plan as an attempt at de facto secession by the eastern province and some even suspected an Indian plot to divide Pakistan.

This was probably not entirely unjustified. As India's top diplomat Sashanka S. Banerjee confirmed in an article in 2020, Mujibur Rahman had already asked New Delhi to support independence for East Pakistan in 1962. By his own admission, Rahman developed the idea for an independent Bangladesh as early as 1958.

The parliamentary elections of 1970 swept Mujibur Rahman's party back into power in East Pakistan with an absolute majority; it also topped the league table of national results, making it the strongest political force in Pakistan. The military dictatorship under General Yahya Khan (1969-1971) was initially reluctant to grant Rahman any mandate to govern and pressured Zulfikar Ali Bhutto's Pakistan People's Party (PPP), which had won in West Pakistan, to negotiate with Rahman on the formation of a unity government.

Home
Print
Newsletter
More on this topic
Bangladesh at 50: A nation created in violence and still bearing scars of a troubled birth Bangladesh: A unique path to independenceClimate change in Bangladesh: The end of the line for climate migrants in DhakaIndo-Pakistani relations: Detente over Kashmir following decades of conflict?
Related Topics
Colonialism, History of the Near and Middle East, Human rights, Military, Opposition in Pakistan, Pakistan's military, U.S. policy in the Middle East
All Topics

India is generally considered to be the world’s largest democracy. As civic freedoms are being eroded, international experts now consider it seriously under threat. By Mira Mandal END_OF_DOCUMENT_TOKEN_TO_BE_REPLACED

COVID-19 has many negative impacts on children, particularly in terms of education and healthcare. Development projects in the Indian state of Assam show how actors can ... END_OF_DOCUMENT_TOKEN_TO_BE_REPLACED

Many marriages to British Asian men are accompanied by false promises of improved finances. Later when the men abandon their wives to return to the UK, some brides' families find ... END_OF_DOCUMENT_TOKEN_TO_BE_REPLACED

Global heating is driving domestic migration in Bangladesh, which sits just above sea level. With a population of 160 million, it is the most densely populated nation in the world ... END_OF_DOCUMENT_TOKEN_TO_BE_REPLACED

As Qatar prepares to host the 2022 FIFA World Cup, the country has come under fire for its treatment of migrant workers, with some nations calling for a boycott of the contest. ... END_OF_DOCUMENT_TOKEN_TO_BE_REPLACED

Urban transport concepts in the global South, often promoted by organisations such as the World Bank, aim to encourage motorised private transport – at the expense of non- ... END_OF_DOCUMENT_TOKEN_TO_BE_REPLACED
Author:
Mohammad Luqman
Date:
Mail:
Send via mail

END_OF_DOCUMENT_TOKEN_TO_BE_REPLACED
Social media
and networks
Subscribe to our
newsletter