"The President Has Spoken; Now We Are Waiting for Action!"

Obama touched Muslim hearts with his speech in Cairo – but now the Arab world is waiting for action to follow on from his words. Amira El Ahl listened to Obama's speech at the University of Cairo

The US president speaking to the Muslims: "Be conscious of God and speak always the truth" – a quote from the Koran

​​The Gezira Club in the upmarket Cairo neighbourhood of Zamalek is the city's green lung. Thousands of well-off Egyptians head to the fashionable club every day to swim, run or indulge in a round of golf.

But anyone who even approached the area on Thursday, 4 June 2009 was pointed very firmly in the other direction by security guards.

The sports club had been declared an American security zone, with adjacent streets blocked off and four huge helicopters taking off just before 4 pm from the golfing greens, a contrast to the usual calm sounds of putting and chipping. Two choppers flew off towards the airport, while the larger machines headed towards the pyramids. On board was the President of the United States of America, Barack Obama.

Historical speech to the Islamic world

Two hours previously, Obama had closed his tensely awaited historical speech to the Islamic world at the University of Cairo, to tumultuous applause. Expectations were high and Obama's critics were sceptical, but in Egypt the overwhelming emotion even beforehand was joy that the US president had chosen the country as the place to hold his landmark speech.

An audience of 3000 people had been invited to the university auditorium in Giza, including 300 students from the various faculties. "I really like Obama and I have great hopes in him," said 19-year-old Alaa, a communication studies student, shortly before the speech. "And I'm sure he won't disappoint us."

For the medicine students Mustafa, Pakinam and Radwa, watching the president of the United States live was a dream come true. "We like Barack Obama, first and foremost as a person and secondly as president," Mustafa said. Obama's family background and his personal history in particular make it easy for most Egyptians to identify more with him than with any of his predecessors. His very appearance makes him look as if he could come from their country too.

Invitation to all groups in society

And the makeup of the invited audience is also likely to gain him bonus points in Egypt. "He invited all groups in society of all shades and colours, without excluding anyone," the Egyptian newspaper Al Masry Al Youm quoted Ahmed Maki, Vice President of Egypt's Supreme Court, a day after Obama's speech. "Our politicians, on the other hand, always do the exact opposite." 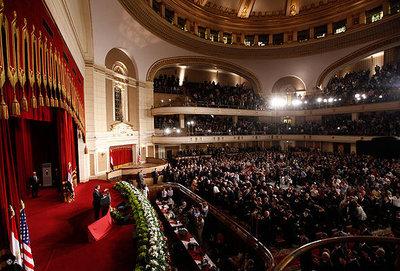 Overwhelming response: "I was especially impressed by his respect for Islam and his intention to focus more on education in the Arab world," said one Egyptian student

​​The invited guests at the University of Cairo included well-known members of the opposition and intellectuals alongside the highest representatives of Islam and Christianity in the country. There were also critical journalists in the audience, side by side with Egypt's cultural and political elites.

President Hosni Mubarak did not attend in person, instead represented by his cabinet and his son Gamal Mubarak – a rather symbolic gesture. Mubarak had invited Obama to a "private discussion" before the speech.

Barack Obama – welcomed to the university's imposing dome with cheers and thunderous applause – talked for an hour on US relations to Islam, extremism, the Middle East conflict and the threat posed by nuclear weapons. He spoke about democracy, freedom of religion, women's rights and the state of the economy.

Not just words but deeds

His announcement that he intended to begin the dialogue with the Islamic world anew – so as to reach a better understanding on both sides – had met with approval in the Arab world. But even before the speech, critics had pointed out that words alone were not enough to heal the rift in relations between America and the Islamic world.

Newspaper headline in Al-Ahram: "Obama has spoken; now we are waiting for action"

​​"No single speech can eradicate years of mistrust," Barack Obama then promptly countered at the start of his speech, following it up with a quote from the Koran: "Be conscious of God and speak always the truth" – "That is what I will try to do."

Barack Obama took the audience's hearts by storm on Thursday with this very first Koran citation. There was rapturous applause in the auditorium, with the reactions to his speech showing just how much his words had touched people.

"He chose the quotes very wisely," commented the Family Minister Mushira Khattab. "I was most impressed by the fact that he talked about freedom of religion and made it clear how important it is to accept other religious communities."

On the steps outside the dome, students were still discussing the speech an hour after Obama left the building – the charismatic US president had captivated them too. "I'm really enthusiastic," said the medicine student Pakinam with a huge smile on her face. "I was especially impressed by his respect for Islam and his intention to focus more on education in the Arab world."

Particularly his words on the rich history of the Islamic world with all its achievements and his wisely chosen Koran citations were balm for the Muslim soul. "The fact that he assumed responsibility for correcting the image of Islam and showed his respect for Islam with several quotes from the Koran is a very good sign," the government-leaning newspaper Al Ahram cites Dr. Mohidin Abdel Halim, a professor at Al Azhar University. But the lecturer also took a critical stance towards Islam itself, explaining that it cannot be down to Obama alone to improve the religion's image in the world. 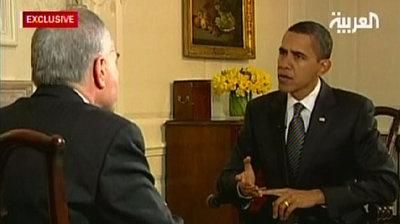 Even before the speech, Obama had promised in an interview with the Al-Arabiya TV channel to work towards mutual respect and better understanding between East and West

​​This is precisely what Barack Obama hoped to achieve through his speech: prompting dialogue and not only making clear how greatly the Islamic world is respected, but also appealing for understanding for the USA. "Our security relies on better relations with the Muslim world," says Dalia Mogahed, an analyst and director of the Gallup Center for Muslim Studies.

She responds to the critics that this is only the beginning of a process. "Every deed begins with a word," says the young expert, who helped polish Obama's speech.

One day after the speech, Cairo had almost returned to normality. The only reminder of the high-ranking visitor was the freshly tarred streets, swept clean of all the usual detritus especially for Obama.

Number one topic in Egypt's media

And of course Obama's visit and his speech were front-page news in the Egyptian press. The title pages all featured pictures of the US president, sometimes flanked by Hosni Mubarak, sometimes during his speech at the university or his visits to the Sultan Hassan Mosque in Cairo's old town and the pyramids at Giza.

In its enthusiasm, the opposition newspaper Al Wafd ran a rather provocative photo combination: its title page shows photos of Barack Obama and Gamal Mubarak, Hosni Mubarak's youngest son tipped by many to follow in his father's footsteps, climbing the steps to one of the government palaces – two dynamic young men striding ahead. The comment? Not necessary – a picture tells a thousand words.

Both pro-government and oppositional newspapers had only positive words for Obama's speech. However, all of them chose the same critical tenor, writing that the speech was designed to make everyone happy. All the important subjects had been addressed, they wrote, and the president's words had been chosen very wisely and favourably.

"Yet these words must also be implemented to be of any real benefit," commented the opposition newspaper Al Masry Al Youm. And the pro-government Al Ahram featured a headline as clear as day: "Obama has spoken; now we are waiting for action."

Amira El Ahl was a foreign correspondent for DER SPIEGEL, reporting from Cairo for two years. She has been a freelance Middle East correspondent since 2008.

Obama's Offer of Dialogue to the Islamic World
Turning Away from Simplistic Dualism
US President Obama has extended his hand to the Islamic world and offered it a "new partnership in mutual respect". In doing so, he is heralding the dawn of a truly new age and confirming a definitive break with the Bush era, says Loay Mudhoon

END_OF_DOCUMENT_TOKEN_TO_BE_REPLACED
Social media
and networks
Subscribe to our
newsletter