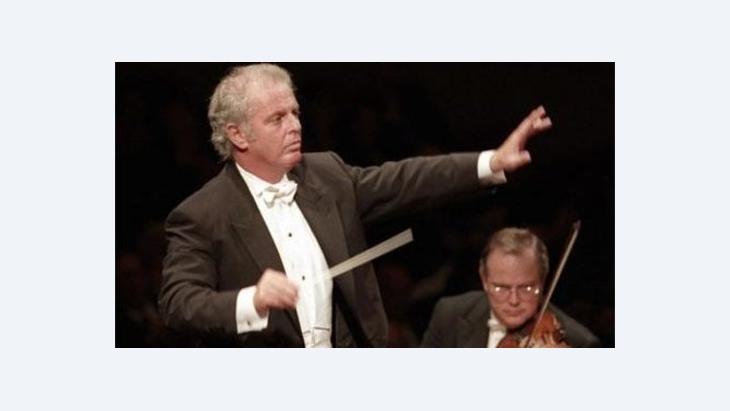 ﻿This audacious project has foundered more than once and even this time its success hung by a thread. Daniel Barenboim performed a concert in Gaza with a group of European musicians. Hans-Christian Rößler reports

When Jawdat al Khoudary sets his mind on something, he does it. Long before the Palestinian leadership moved to declare a Palestinian state, the building contractor from Gaza City had already set up a national museum. At the very least, it offers a starting point for the archaeological collection.

"Better to have a small museum than none at all," he said to himself. And so, on the outskirts of the Shati refugee camp, he set up the Al Madhaf Cultural House – complete with a hotel and restaurant – in a stubborn declaration of his faith in the culture and history of his native city of Gaza, which is thousands of years older than the current rule by the Islamists of Hamas. 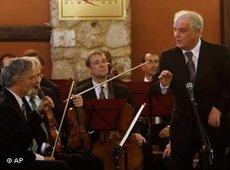 Sending out a clear signal against the cultural blockade: Daniel Barenboim conducts the Orchestra for Gaza, which was set up specially for this concert, at the Al Madhaf Cultural House in Gaza City on 3 May 2011

​​On Tuesday, however, the courageous cultural visionary could not hide his nervousness. Only as Daniel Barenboim sounded the first few notes of Mozart's famous serenade No. 13 for strings in G major did Khoudary's face finally relax. Up until the last minute, Palestinians like himself could scarcely believe that musicians from the Vienna and Berlin Philharmonic orchestras and three other European orchestras would be performing in his sand-coloured museum on the Mediterranean.

But Barenboim, the concert pianist and director of the Berlin State Opera who grew up in Israel, has been just as persistent as Khoudary. For many years, he could not be dissuaded from his idea of performing in Gaza, as he has done for more than a decade in Ramallah on the West Bank.

After the death of the terrorist leader Osama Bin Laden, the trip became even more controversial. There was opposition to the concert within the ranks of Hamas. Barenboim had to negotiate until late into the night. Permission was finally granted.

"We wanted to send a clear signal that we are against the cultural blockade. We are here to show that people are concerned about your plight," he said at the start of the concert to a standing ovation by the audience. Most of his fellow Israelis regard the Gaza Strip, ruled by Hamas Islamists, as "Hamastan." Just over two years ago, a war raged for weeks between Hamas and Israel. 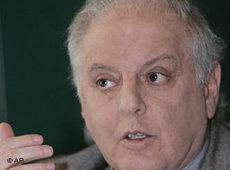 After the concert in Gaza, Barenboim said that more international pressure should be exerted on Israel to end the blockade of the Gaza Strip

​​Patrol boats of the Israeli army plough through the waves just off shore, while bearded Hamas police officers in black uniforms keep watch on the street in front of the museum. Inside, only the faint clinking of the oriental ceiling decorations in the breeze generated by the air conditioner and the occasional ring of a mobile phone disturb Mozart's music.

Several NGOs and the UN, who helped organise the concert, invited around 400 guests to attend the concert. A number of school groups are also here, boys and girls sitting apart from each other. Most of the girls have their hair covered with a white headscarf. Representatives of Hamas, who have been striving for years to implement their idea of Islamic values, were not invited.

Barenboim arrived with a total of 50 guests. He was not only accompanied by his fellow musicians, but also by close friends and companions, such as his wife, the pianist Elena Bashkrova, and the widow of Edward Said. To this day, the deceased Palestinian-American literary scholar, with whom Barenboim founded the West-Eastern divan Orchestra, remains a source of inspiration for the conductor.

Among the violinists in the "Orchestra for Gaza," which was assembled specially for this occasion, is Barenboim's son Michael. Markus Schächter, the director of the German television broadcaster ZDF, can be seen in the audience. The only extended rehearsal took place the previous evening at El Arish Airport in Egypt, where the group had arrived in a specially chartered plane. 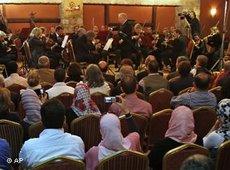 ​​The concert, which had been planned for weeks in advance, was only announced publicly once the plane had taken off. Although just a distance of 40 kilometres away, the delegation of musicians could only spend a few hours in the Gaza Strip for the concert due to security concerns.

"When we rehearse a piece, we play as if it were the first time we were going to perform it, even if it is part of our regular repertoire. We are used to thinking things through anew," explained the conductor to the Palestinian audience and challenged them to do the same. The Arab revolutions and the nuclear catastrophe in Japan, said Barenboim, had "called everything into question" for him personally in any event.

In favour of a Palestinian state

After the concert, he gave a political speech, although, as UN peace ambassador, he actually wanted to avoid it. Barenboim condemned the construction of settlements and all forms of military force and expressed his support for a Palestinian state.

The date of the performance also seemed highly political. The day after the concert, Hamas and the Fatah organization of Palestinian President Mahmud Abbas met in Cairo to seal a reconciliation accord that is meant to end hostilities between the two groups. Barenboim said that he hoped the agreement would succeed.

The performance in Gaza, however, had nothing to do with the news. At least the new Egyptian government, which plans to open its borders to Gaza soon, helped to make the journey easier for the musicians. In the past, the Israeli authorities did not permit Barenboim to enter Gaza from its territory.

Barenboim's concert tour was barely covered in the Israeli press. The death of Bin Laden overshadowed the performance by the controversial musician, who, in the past, had upset many Israelis by conducting works by Richard Wagner in their country.

In Gaza, by contrast, the audience was not only excited by the opportunity to hear Mozart. As the musicians played the opening bars of Mozart's Symphony in G Minor k. 550, a joyful murmur rippled through the audience. The melody serves as the basis for a love song by Fairuz, the renowned Arab female singer. Jawdat al Khoudary smiles. It was also for events such as this, aimed at bridging cross-border cultural divides, that he built his museum.

Hamas in Gaza, the Palestinian Authority in the West Bank, and Israel: Palestinians have fewer and fewer rights, says Khaled Elgindy. The Middle East could escalate at any time. ... END_OF_DOCUMENT_TOKEN_TO_BE_REPLACED

Joe Biden promised to make democracy and human rights central to US foreign policy. But that means not insisting on Israel's right to defend itself without mentioning its ... END_OF_DOCUMENT_TOKEN_TO_BE_REPLACED

As the Biden administration attempts to promote democracy and human rights in the Middle East, it will confront the deep-seated belief among Arabs that U.S. policies are unfair to ... END_OF_DOCUMENT_TOKEN_TO_BE_REPLACED

Ben Aylon’s debut international album sees him elevate the traditional music and instruments of Senegal and Mali into a fresh contemporary setting. Seven years in the making, " ... END_OF_DOCUMENT_TOKEN_TO_BE_REPLACED

Years ago, the International Holocaust Remembrance Alliance formulated how hatred of Jews can be recognised. Now a new definition is causing controversy. By Sarah Judith Hofmann END_OF_DOCUMENT_TOKEN_TO_BE_REPLACED

When it comes to talent, Palestine may well be able to compete with other football teams in the region, but growth and development are hampered by the situation in the Palestinian ... END_OF_DOCUMENT_TOKEN_TO_BE_REPLACED
Author:
Hans-Christian Rößler
Date:
Mail:
Send via mail

END_OF_DOCUMENT_TOKEN_TO_BE_REPLACED
Social media
and networks
Subscribe to our
newsletter