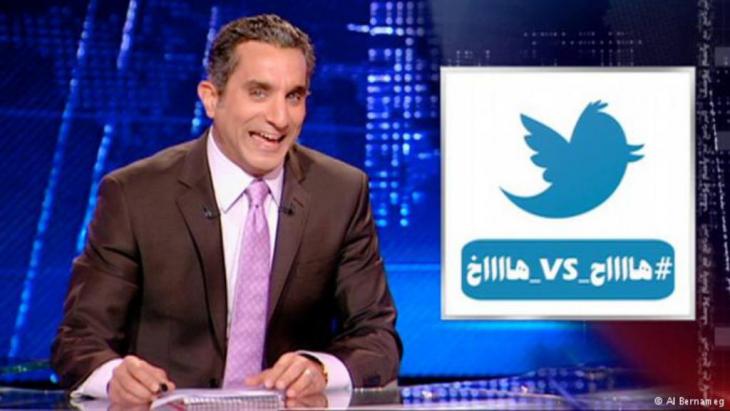 Bassem Youssef
All the world's a stage for Egyptian satire star

Half the country was glued to the screen whenever Egypt's political satirist Bassem Youssef was on TV. But in May of last year he cancelled his show – out of fear for his family's safety. Now he'll be performing to a huge international audience, presenting the International Emmy Awards. By Paul-Anton Kruger

With Bassem Youssef, it's sometimes hard to tell where seriousness ends and irony begins. The 41-year-old's reaction to being chosen in New York as the presenter of the next International Emmy Awards show on 23 November was just such a case.

Being the first person from the Middle East to host the USA's most important television awards ceremony placed great responsibility on his shoulders to do the best job he could, he commented, adding "and I hope that this will shed more light on the vibrant entertainment industry in my region." Pardon?

Bassem Youssef spent three years mocking anything and anyone in his home country of Egypt. It started with YouTube videos about the absurd propaganda broadcast by Egyptian state television when it was still trying to defame the protests against then president Hosni Mubarak. Youssef, a heart surgeon, was soon so popular that he got his own TV show.

In "AlBernameg" ("The Programme"), his first target was the military. Then he turned his ridicule on the Muslim Brotherhood's sanctimonious bigotry and the poor English of the Islamist president Mohammed Morsi, who had him arrested on one occasion. Half the country was glued to the screen when his show was broadcast live once a week from the Cinema Radio in the centre of Cairo. 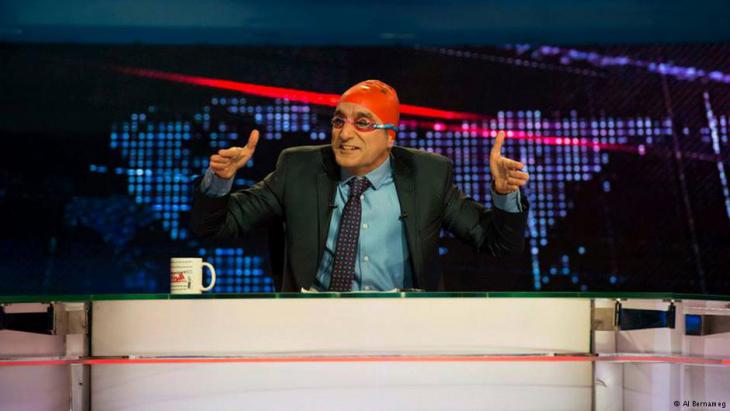 Bassem Youssef hosting his hugely popular satirical television show "AlBernameg". "Youssef spent three years mocking anything and anyone in his home country of Egypt. It started with YouTube videos [...]. Youssef, a heart surgeon, was soon so popular that he got his own TV show," writes Paul-Anton Kruger

But after Morsi was removed from office by the military, the pressure on Youssef grew – and at some point it became too much. Ex-general Abdul Fattah al-Sisi's inauguration as president was spared Youssef's public scrutiny. After changing channels and taking several breaks, he eventually cancelled his show for good in May of last year. He feared for his safety and that of his family, he said, not going into any more detail.

"If you laugh, you're not afraid any more," Youssef once said of the enlightening effect of satire and sarcasm, and Egyptians are very receptive to this kind of humour. Yet now, despite his popularity, the satirist and father was afraid of making people laugh.

The channel that suspended his show took him and his production company to court, where he was sentenced to pay the equivalent of €11million – which is certainly one way of silencing uncomfortable voices.

The elite US Harvard University then gave him a guest professorship in January and he made an appearance on Jon Stewart's "Daily Show", his former inspiration. The show's producer Sara Taksler has made a documentary about him and the power of satire, with the title "Tickling Giants".

In a recent interview for the BBC he once again ruled out a return to Egyptian TV screens in the near future. But he won't pass up the global stage offered by the International Emmys – perhaps spiced with a few barbed remarks on the entertainment industry in his region.

In Doha, Arabs from Morocco, Tunisia, Egypt and Algeria are gathering to celebrate the first ever FIFA World Cup to be held on Arab soil. The criticism from Europe? Over the top, ... END_OF_DOCUMENT_TOKEN_TO_BE_REPLACED

November 2022 sees the Arab world firmly in the spotlight with the COP27 in Egypt and the FIFA World Cup in Qatar. Public trust in MENA governments is weak, thanks to their ... END_OF_DOCUMENT_TOKEN_TO_BE_REPLACED

Palme d’Or winner "Boy from Heaven" is a classic crossover film in which cultural elements are mixed together in haphazard and random fashion. Shady Lewis Botros bemoans the ... END_OF_DOCUMENT_TOKEN_TO_BE_REPLACED

COP27 in Sharm el-Sheikh is turning into a PR disaster for Egypt’s military regime. Instead of praise for the host, the news is full of solidarity for imprisoned activist Alaa ... END_OF_DOCUMENT_TOKEN_TO_BE_REPLACED

END_OF_DOCUMENT_TOKEN_TO_BE_REPLACED
Social media
and networks
Subscribe to our
newsletter