Bassem Youssef: Satire in the Service of Democracy

Never before in the Arab world has a television show unleashed such controversy as the satirical programme "Al Bernameg" ('The Programme') presented by Egyptian television star Bassem Youssef – a furore that was stoked further when its broadcasting slot on the Egyptian broadcaster "CBC" was withdrawn in the wake of the uproar it caused. This makes it a milestone in the history of the freedom of expression in Egypt. 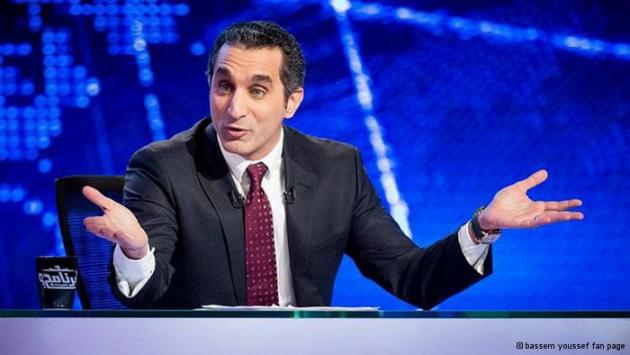 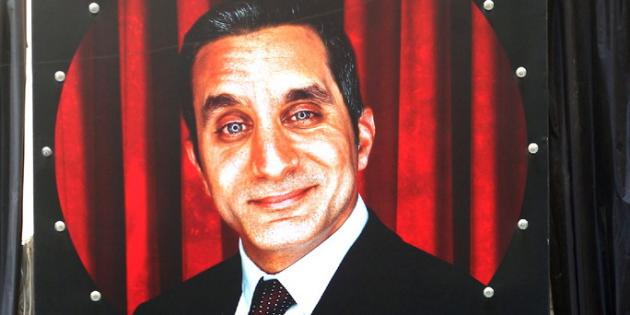 A surgeon specialising in media: Bassem Youssef, 39 years old, surgeon. After the 2011 revolution, he decides to give up his medical career and comment on Egypt's political situation on Youtube, with biting mockery and initially, very limited means. Before long, his video clips become a mass phenomenon, and he receives an offer from Egyptian broadcaster "OnTV" to present his own satirical programme under the title "Al Bernameg". 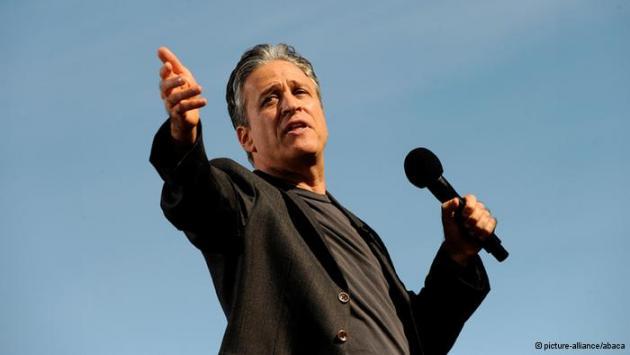 The influence of Jon Stewart: Before the first series of his programme "Al Bernameg" on "OnTV", Bassem Youssef travels to the US where he visits the studio of US satirist Jon Stewart to learn from his experience. The two men strike up a friendship. The American star is even a guest on one of Bassem Youssef's shows. 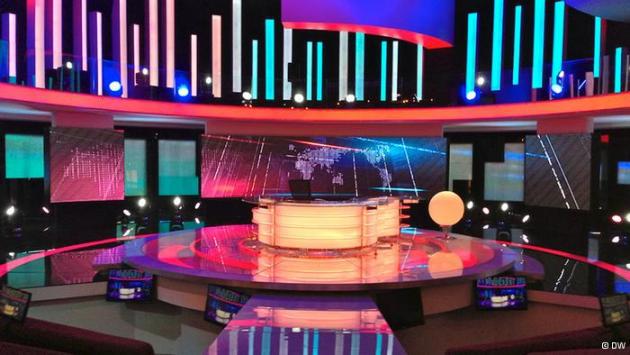 Major appearance in front of a real audience: Following his success with "OnTV", Bassem Youssef enters a new career phase on "CBC", which provides him with a large auditorium. It's here that he can interact with a real audience. This period also coincides with the government of the Muslim Brotherhood led by President Mohammed Morsi, which becomes the target of his sharp wit and ironic style. 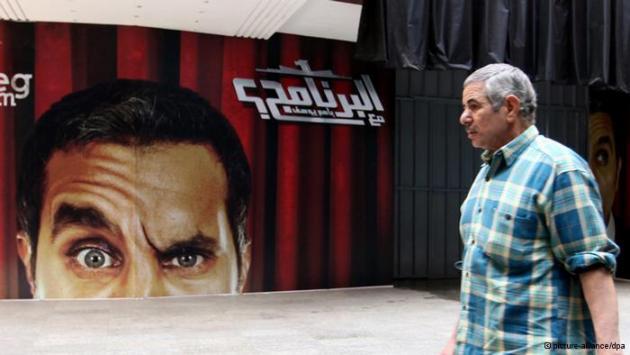 A brazen show in a real theatre: The historic "Radio" theatre where Bassem Youssef presents his programme is located in downtown Cairo. But the idea of a show in a theatre with a live audience is not without its risks. Bassem Youssef felt he had no choice but to dispense with the live audience twice during his career, owing to bloody unrest on the streets. 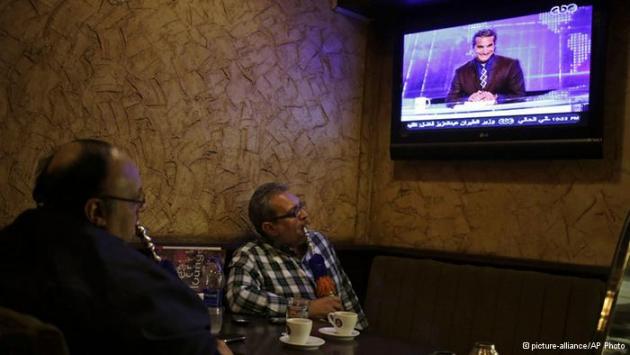 More scope for freedom of expression: The weekly broadcast of "Al Bernameg" becomes something millions of viewers across the entire Arab world look forward to with anticipation – including café owners who capitalise on the fact that people gather around the television set in droves, just as they do for soccer matches. This is a first for the Arab world – never before has a television programme held such mass appeal. Some say the programme has broadened the playing field for freedom of expression in Egypt. 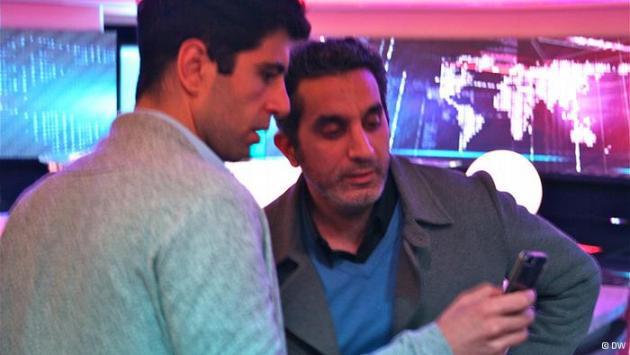 Satire as an integral element of Egyptian society: "Satire is an integral component of the mentality and character of the Egyptian people. People make jokes about everything, even the most serious things. There's a sense that laughter makes their pain and desolate reality more bearable," says Bassem Youssef in an interview with the journalist Jaafar Abdul Karim. 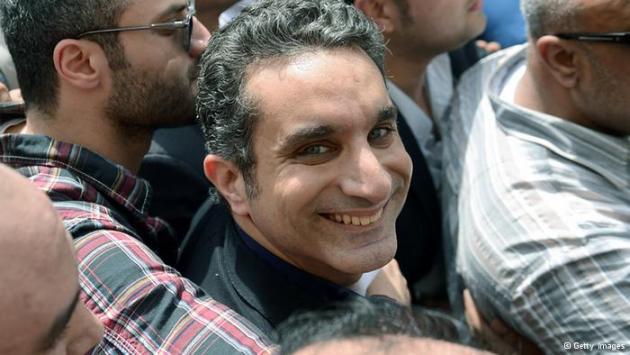 One of the world's most influential personalities: Bassem Youssef is included on the TIME list of the world's 100 most influential people in the year 2013. At the same time, YouTube announces plans to honour the programme "Al Bernameg" after it was called up by more than one million users. As a result of the broadcast ban imposed on his programme, the number of people following Bassen Youssef on Facebook climbed to some 1.25 million within less than a week. 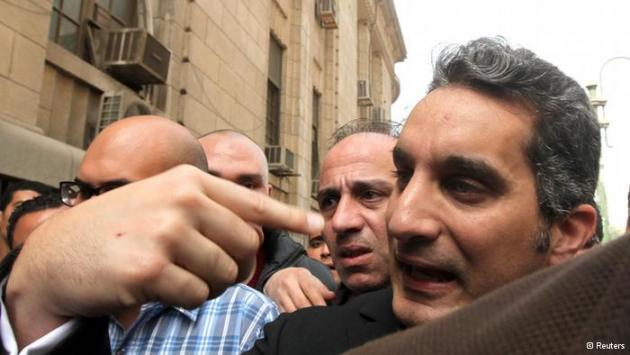 Legal complications and a tide of accusations: On 31.03.2013, Egypt's Attorney General ordered that investigative proceedings be launched against Bassem Youssef for alleged defamation of Islam. Following the broadcast of the first programme in the third series a warrant is issued for his arrest for "disseminating defamatory claims that may disrupt public order, inflict damage on the public good and foster chaos and discord." 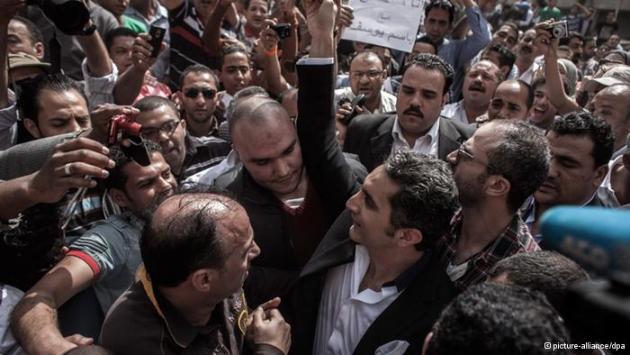 Fear of hopelessness: It's still not clear what the consequences of Bassem Youssef's ban will be, but many of his followers still hope he'll return to their screens soon. After all, this isn't the first time Youssef has encountered problems. He's already had to deal with indictments on the grounds of woolly accusations such as "disrupting public life" or "denigration of national and religious symbols". Bassem Youssef has often said that his greatest fear is not of suppression, but fear of hopelessness.

END_OF_DOCUMENT_TOKEN_TO_BE_REPLACED
Social media
and networks
Subscribe to our
newsletter