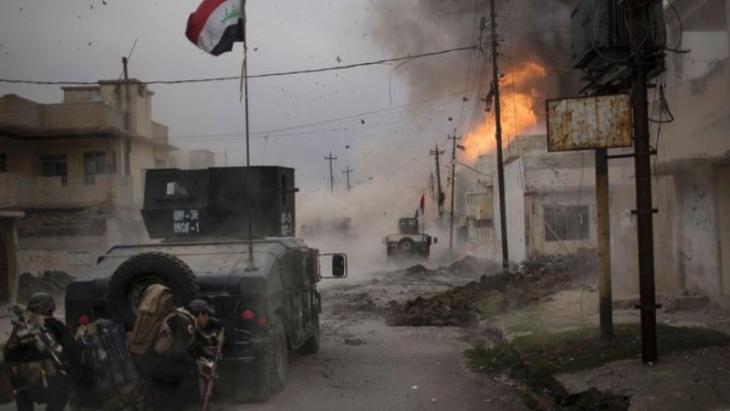 The battle for Mosul should have been brought to an end a long time ago. Last October, Iraqi Prime Minister Haider al-Abadi promised the city would be liberated within three months. But the battle for what used to be Iraq's second largest city has now been raging for more than seven months. And the number of civilian victims continues its dramatic rise. By Birgit Svensson

The Iraqi army is upping the tempo. It claims that 90 percent of the city has now been liberated from IS. The declared intention was to be finished with Operation Mosul by the start of the holy fasting month of Ramadan. During this time, observant Muslims must refrain from eating or drinking from dawn to dusk.

This is a now putting an enormous strain on the soldiers. The bulletproof vests, weapons, munitions and other equipment that the soldiers have to carry around with them cause body temperatures to soar. Iraq is in any case currently afflicted by a heat wave that is pushing the thermometer above the 40-degree Celsius mark. But the goal has not been realised. Government troops, supported by US-coordinated air attacks, are still meeting considerable resistance in the western half of the city.

The fight for the northern Iraqi city, taken by IS in June 2014, has undoubtedly entered its final phase. The jihadists are defending their last stronghold in Iraq with extreme doggedness and brutality. At times this has meant either slowing or even partially suspending the Iraqi army campaign. Progress by government troops in recent days and weeks has been painfully slow, especially in the densely built-up and populated western part of the city. 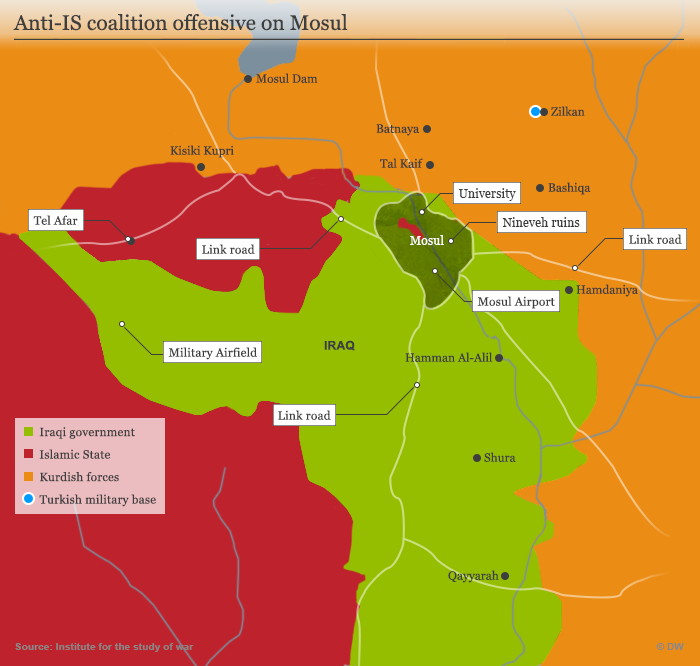 IS′ last stronghold on the brink of capitulation: the river Tigris runs from north to south through the centre of Mosul. The jihadist group is currently holed up in the western precincts of Iraq′s second largest city. Mosul was occupied by the Sunni extremists in the summer of 2014. In October 2016 the Iraqi army launched its offensive to recapture the city; by the end of January government troops had recaptured eastern Mosul. In mid-February, Iraqi forces renewed their efforts, focussing attacks on West Mosul. According to official reports, 90 percent of the city has been re-taken. The task force recently revealed that the Iraqi army is gaining ground in Mosul′s al-Shifa district. Units of the Iraqi federal police force are facing resistance in the al-Zinjili and al Saha al Awla districts. All three areas are located north of Mosul Old Town

On several occasions there have been reports of large numbers of civilian casualties, some caused by airstrikes. Fighter jets from the U.S.-led international coalition are supporting the Iraqi army offensive. The UN estimates that 200,000 civilians are still trapped in IS controlled sections of Mosul's old town. The online magazine "Iraq Oil Report" reports that they are enduring agonising hours:

"The dead bodies of civilians lie in the streets, killed in street battles and airstrikes. Around 50 houses were destroyed on one single day. Ten doctors, who had sought refuge in a building, are dead. There is no longer any kind of medical care available. People have no water and no food. The families of IS fighters are also slowly running out of food, after stealing the last supplies from those who don't want to co-operate with IS. If they refuse to hand over their food they are shot dead."

IS focus on civilians

The neighbourhood of Thawra is repeatedly making headlines as one of the most fiercely contested areas of western Mosul. While residents in the eastern districts of the city are gradually returning to their houses, clearing away the rubble and carrying out initial repairs to their property, fighting continues on the other side of the Tigris. When 90 civilians were killed in Thawra on a single day, the anti-IS alliance bowed to political pressure and suspended combat operations for several days. Eyewitness reports from this part of the city are among the most horrific stories to emerge from the conflict.

The black IS banner still flies from the minaret atop the Great Mosque. Government troops have now been trying in vain to recapture the Islamic place of worship. The Mosque is named after the Turkish leader Nur al-Din Mahmoud Zangi, who ruled over Mosul and Aleppo during the Ottoman Empire. The mosque was built two years before his death in the year 1174. During his reign, Nur al-Din called on all Muslims to join the jihad against Christian crusaders.

Twenty years after 9/11, the world is faced with the dual challenge of Islamophobia and anti-Westernism. Ahmet Kuru argues that Muslims in the West, well versed in both Western ... END_OF_DOCUMENT_TOKEN_TO_BE_REPLACED

Two decades after the attacks of 11 September 2001, the West faces the shattered debris of its failure – not only in Afghanistan, but also in Iraq, Syria, Libya and Yemen. What ... END_OF_DOCUMENT_TOKEN_TO_BE_REPLACED

Twenty years after 9/11, the United States is recalibrating its war policy. However, its assertions that the era of endless wars is over are a myth, writes Maha Hilal END_OF_DOCUMENT_TOKEN_TO_BE_REPLACED

The coronavirus pandemic has turned lives upside down all over the world. In the Middle Ages, however, people lived with epidemics all the time. The best and most famous ... END_OF_DOCUMENT_TOKEN_TO_BE_REPLACED

While agreeing last week to a withdrawal of US combat troops from Iraq, neither Iraqi nor US leaders can admit publicly how much they need each other. By Cathrin Schaer END_OF_DOCUMENT_TOKEN_TO_BE_REPLACED

Reading Hassan Blasim's God 99 is an immersive experience of grief and exaltation, anger and disgust, writes Marcia Lynx Qualey. We join the Iraqi narrator as he sits around in ... END_OF_DOCUMENT_TOKEN_TO_BE_REPLACED
Author:
Birgit Svensson
Date:
Mail:
Send via mail

END_OF_DOCUMENT_TOKEN_TO_BE_REPLACED
Social media
and networks
Subscribe to our
newsletter