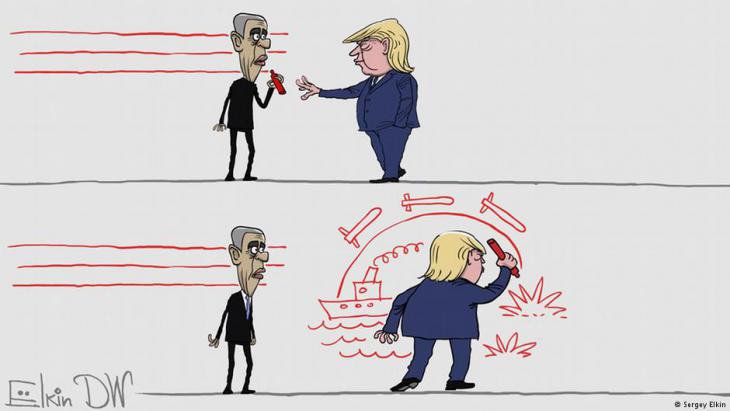 The U.S. war on terror is creating more terrorists and will further destabilise the Middle East. Only in Syria could Trump's military determination potentially contribute to a negotiated solution, says Kristin Helberg

Donald Trump and the Middle East – the mere thought of it is enough to give you bellyache. In the war on terror, the new U.S. president is only making things worse. He's fighting with the wrong methods (air strikes on residential areas) and the wrong allies (Saudi Arabia, Gulf monarchies and Egypt's al-Sisi) against a vaguely defined phenomenon ("Islamist terror"), the origins of which he does not understand. All that matters is the bogeymen are the right ones and America will be "great again".

Arab potentates should buy American weapons and use them to fight "the terror". How practical then, that when it comes to terrorists, it is each to his own: Muslim Brothers and Hamas, Shia demonstrators, frustrated youngsters or critical bloggers, Iran, Qatar or Hezbollah. Anyone who questions my power is evil – whether with attacks or online, at protest rallies or on Al Jazeera – in the Middle East, terrorists are branded with such ease.

The problem with this instrumentalised anti-terror battle is not only that it affects many innocent people, but that it ignores the root of the evil: the hopelessness of a locally-dependent, but internationally informed generation of 15 to 35-year-olds. They represent the majority population in their home nations and are being denied the chance to live a self-determined life in dignity and freedom. As long as kleptocratic regimes do nothing to reduce this frustration and suppress it using force, the next eruption is pre-programmed.

The war against IS cannot be won with military means alone. Air strikes and advancing militias may drive IS functionaries from Mosul and Raqqa, but they won′t vanquish them. On the contrary. The violence that accompanies the "liberation" – such as the U.S. attack on a school building full of refugee families in the Syrian city of Mansoura on 21 March resulting in 200 deaths, or the torture and execution of Shia militiamen in Iraq – generates fury, desperation and the desire for revenge – the perfect breeding ground for more extremism. 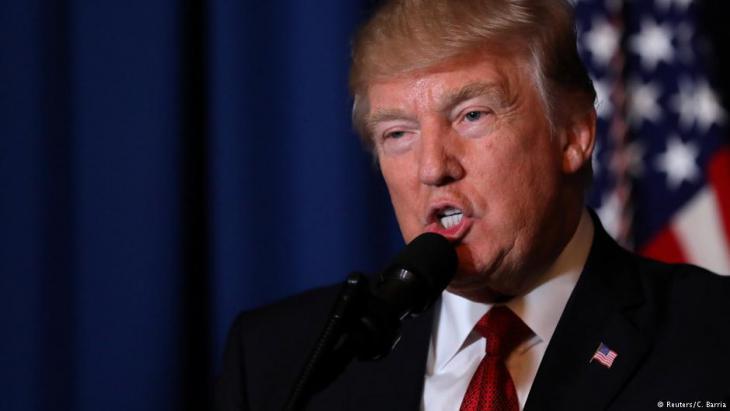 Washington′s new policy of "zero tolerance " against the leadership in Damascus: U.S. President Trump recently threatened Bashar al-Assad that he would ″pay a high price″ were he to use chemical weapons again. The U.S. administration assumes that preparations are already underway for such an attack. White House Press Secretary Sean Spicer has said there are signs that a chemical weapons attack is in the offing, designed to kill a maximum number of civilians, including children

The outcome of this campaign is therefore uncertain, first and foremost in Syria. After all, unlike in Iraq, in Syria it is not clear what will come on the heels of IS. Instead of a united front, there is rivalry between various war coalitions: those who drive IS out first take control, wherever that area might be. This is the reason for the wrangling in eastern Syria, where four alliances are advancing against IS.

Firstly, coming from the northeast are the Syrian Democratic Forces (SDF) – dominated by the Democratic Union Party (PYD) which has close links to the PKK – advancing on Raqqa as America′s most important ally. Secondly, pushing from the south are the rebels of the Free Syrian Army (FSA) supported by the U.S., Britain and Norway and trained by American special units on the al-Tanf border crossing. Thirdly, rebel groups to the north supported by Turkey are preventing IS territories from falling under Kurdish control. And fourthly, approaching from the west are forces loyal to Assad: regime troops, Hezbollah, various militias, Iran and Russia.

Because these forces have been pulled out of contested areas in Idlib, Aleppo, Hama and territory around Damascus, these were declared de-escalation zones in early May with the aim of freezing battle fronts in the west, in order to have capacities in the east. Only the southern province of Daraa – also a de-escalation zone – is being bombarded by the regime more heavily than ever.

Fighting over Syria′s bread basket and its oilfields

So what is happening in the east of Syria, this sparsely populated stone desert? The province of Deir al-Zor, with its eponymous capital, carries economic significance as the nation's bread basket and main oilfield site. Cereal and cotton crops grow here and it is also the location of reserves of both natural gas and Syria's modest crude oil deposits. 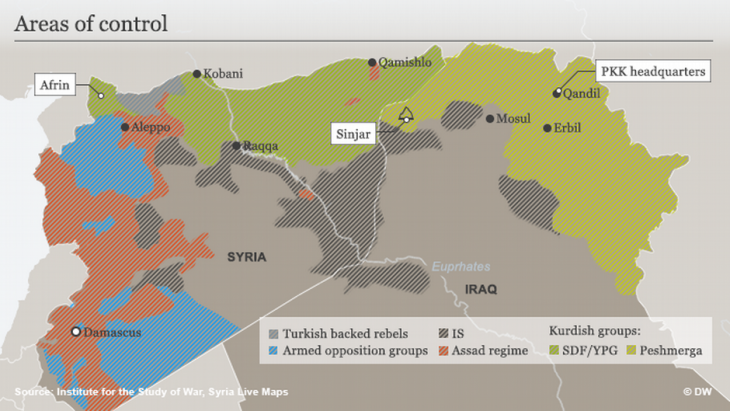 United against IS: coming from the northeast are the Syrian Democratic Forces (SDF) – dominated by the Democratic Union Party (PYD) which has close links to the PKK – advancing on Raqqa as America′s most important ally. Pushing from the south are the rebels of the Free Syrian Army (FSA) supported by the U.S., Britain and Norway and trained by American special units on the al-Tanf border crossing. Rebel groups to the north supported by Turkey are preventing IS territories from falling under Kurdish control. And approaching from the west are forces loyal to Assad: regime troops, Hezbollah, various militias, Iran and Russia. Yet, unlike in Iraq, it is not clear in Syria what will replace IS

Regime troops, rebels and IS have therefore been fighting for years over the city, the western part of which is to this day controlled by Assad and has been occupied by IS since 2014. Another key area is the border to Iraq, which is of interest to all parties. To Assad, to win back the entire national territory and revive trade routes such as the Baghdad-Damascus highway; to Tehran, to create a land route from Iran via Iraq, Syria and Lebanon: to the U.S. to prevent the aforementioned and no longer leave the Syrian-Iraqi border area to the jihadists as a retreat zone.

The readiness of each group to ruthlessly assert its interests is great. Assad's troops are advancing, sending armed drones and fighter bombers to stop the U.S. alliance. Washington is attacking pro-regime convoys and shooting down drones and fighter bombers belonging to the Assad coalition to protect its own troops in al-Tanf and its allies, the SDF and FSA. Russia is escalating the situation verbally, but appears not to want any direct confrontation with the USA. And therein lies an opportunity. After all, Trump's determination is shifting the system of coordinates in which Syria has been stuck – with no prospect of a negotiated solution – for years.

In contrast to his predecessor Obama, Trump and Putin speak the same language. Threats are issued and bombs dropped when their own interests need defending. That is dangerous, but it also brings a deterrent along with it that often leads to diplomatic breakthroughs. A monstrous imbalance – Obama hesitated, Putin reacted and Assad killed at will – could become a solution-oriented pragmatism.

Neither Trump nor Putin are concerned with Assad as an individual. Trump wants to force back the influence of Iran, something that is also too much for the Russians in Syria. Both want to stabilise Syria without investing much. They realise that things cannot continue with Assad in the long-term and to this end, opposition, rebels and activists must be included. 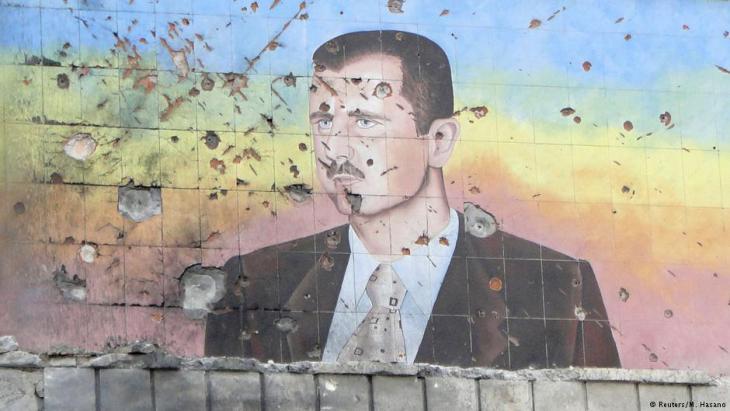 Targeting Assad: "Should these attacks force Assad to enter into serious negotiations over a transfer of power, much would be gained. It's just a great pity that these days in the Middle East, a vague chance of peace arising from ignorance is a reason to be positive," writes Kristin Helberg

Moscow is already seeking contact with local councils in the de-escalation zones, to secure its own influence during a transition phase. Is this enough to bring peace? Certainly not. But instead of risking an open confrontation with Trump, Putin might choose to encourage his protege Assad to make concessions.

And before the nuclear deal lands on the rubbish dump of history and Trump's "best friends" in Riyadh become megalomaniacs, Tehran could see itself forced to constructively cooperate over a new order in Damascus, if it is to be involved at all.

The competition for Syria's IS territories will continue to escalate, the odd aircraft will be shot down as Assad opponents celebrate their victories. Of course for Trump this isn't about protecting people, after all the international anti-IS coalition killed more civilians in May than the regime. Nevertheless, in the eyes of many Syrians, targeted attacks on Assad's war machine are the first meaningful intervention in this conflict, because damage is being inflicted on military structures and not civilians.

Should these attacks force Assad to enter into serious negotiations over a transfer of power, much would be gained. It's just a great pity that these days in the Middle East, a vague chance of peace arising from ignorance is a reason to be positive.

Mourad al-Marouai was just nine when a landmine killed him on a beach in war-torn Yemen, a tragedy that will haunt his family forever. After a swim, the little boy "suddenly ... END_OF_DOCUMENT_TOKEN_TO_BE_REPLACED

This year’s Morgenland Festival opened with the premiere of Kinan Azmeh’s musical theatre piece, “Songs for Days to Come”, based on fifteen poems by contemporary Syrian poets. ... END_OF_DOCUMENT_TOKEN_TO_BE_REPLACED

Rumi's poems, though generally stripped of their Islamic symbolism, are hugely popular around the world. Yet Islamic mysticism is still very much at the heart of these verses. ... END_OF_DOCUMENT_TOKEN_TO_BE_REPLACED

The Ukraine war is changing the global geopolitical landscape. Ali Khamenei, Iran's most powerful man, is already cosying up to Russia in anticipation of a harsh post-war reality ... END_OF_DOCUMENT_TOKEN_TO_BE_REPLACED

Analyst Iyad El-Baghdadi examines the ongoing tensions between the United States and the two Gulf states – Saudi Arabia and the UAE – and their geopolitical implications in ... END_OF_DOCUMENT_TOKEN_TO_BE_REPLACED

The Ukraine war has seen energy prices spike with oil producers in the Middle East making more money than ever. But will it put the brakes on long-planned reforms to diversify oil ... END_OF_DOCUMENT_TOKEN_TO_BE_REPLACED
Author:
Kristin Helberg
Date:
Mail:
Send via mail

END_OF_DOCUMENT_TOKEN_TO_BE_REPLACED
Social media
and networks
Subscribe to our
newsletter