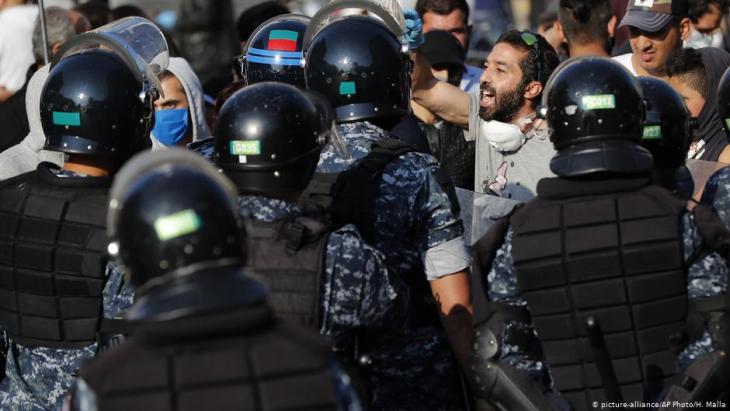 Beirut on the brink
Regardless of corona, Lebanon is at economic breaking point

Lebanon's economy is imploding and with it social stability. While the country’s politicians understand the depth of the crisis, they have used the coronavirus lockdown, argues Maha Yahya, as an chance to settle old scores and – following months of popular rejection – stage a comeback

The Lebanese are facing a perfect storm of challenges, including a political crisis, not to mention a triple fiscal, banking and exchange rate crisis. The government recently acknowledged that the banking sector alone had accumulated losses of $83 billion. The Lebanese pound is in free fall, trading at around LL4,000 to $1, while the official exchange rate is LL1,500 to $1.

Recent consumer price index reports show price hikes of over 60 percent for some basic goods since March. Inflation for 2020 has been estimated by the government at 25 percent.

The economy is in deep recession, the private sector is strapped for cash due to informal capital controls imposed by an illiquid and possibly insolvent banking sector, and government revenues have collapsed. A stimulus package is needed to breathe life into the economy, but none has been forthcoming.

This crisis is not the outcome of months of protests against the political class, nor is it the consequence of measures taken to deal with the coronavirus. Rather, it is the result of decades of colossal political and economic mismanagement and corruption enabled by a sectarian power-sharing system.

The curse of vested interests

A self-defeating logic has prevailed in the country for the past seven months. Lebanon needs an immediate injection of dollar liquidity to support its economy. For that, the government must present a viable economic and financial plan through which it can negotiate external support, particularly with the International Monetary Fund (IMF), the only institution capable of an immediate disbursement of budgetary support. The IMF seal of approval would, in turn, open the door to assistance from other entities, including the European Union.

However, the IMF will only respond to a transparent and measurable reform plan. And that is where Lebanon is continuing to waver. The policies required to address Lebanon’s daunting problems include spending cuts in the public sector, ending the hijacking of state institutions and, perhaps most important, reform of the highly inefficient electricity sector, which contributes greatly to the annual budget deficit.

Yet most of the reforms would undermine the vested interests of the politicians and parties, who thus far have proven unwilling to accept the pain of adjustment. The political cost of necessary austerity measures would also lose these parties support among their political clients. As a result the government’s approach to the crisis has been ad hoc and inconsistent.

Hezbollah, or Party of God, was conceived by Muslim clerics in the 1980s in response to the Israeli invasion of South Lebanon in 1982. The Shia group has a political and military wing.

National support against Israel: Hezbollah emerged in the 1980s as an amalgamation of Shia militias and played a major role in the Lebanese civil war. It used guerrilla warfare to drive Israeli forces out of South Lebanon – Israel withdrew in 2000. Israel and Hezbollah fought another war in 2006. Its defence of Lebanon against Israel won it cross-sectarian support and acceptance in Lebanese society

Backed by Iran: since its creation, Hezbollah has received military, financial and political support from Iran and Syria. Today, Hezbollah's military wing is more powerful than Lebanon's own army and has become a major regional paramilitary force

Political apparatus: Hezbollah turned its focus to politics following the end of Lebanon's 1975-1990 civil war. It represents a large section of the Lebanese Shia population and is allied with other sectarian groups, including Christians. Their political development has mostly come under Hassan Nasrallah (pictured), who became the group's leader in 1992

Armed wing: unlike other parties in Lebanon's multi-sided 1975-1990 civil war, Hezbollah did not disband its armed wing. Some Lebanese political groups, such as former Prime Minister Saad Hariri's Future Movement, want Hezbollah to put down its arms. Hezbollah argues its militant wing is necessary to defend against Israel and other external threats

Terror group? A number of countries and bodies, including the United States, Israel, Canada, the Arab League and, most recently, Germany, consider Hezbollah a terrorist organisation. However, Australia and many European Union countries differentiate between its legitimate political activities and its militant wing

Hezbollah enters Syria's civil war: Hezbollah has been one of the main backers of Syrian President Bashar Assad in the country's civil war. Its entrance into the war helped save Assad, one of its chief patrons; secured weapons supply routes from Syria and formed a buffer zone around Lebanon against Sunni militant groups it feared would take over Syria. As a result it has won considerable support from Shia communities in Lebanon

Sectarianism: Lebanon has long been at the centre of regional power struggles, particularly between Saudi Arabia and Iran. However, Hezbollah's military and political ascendancy, as well as its intervention in Syria, have also helped stoke Sunni-Shia sectarian tensions in Lebanon and across the region

This has had two consequences. First, Lebanon is in the midst of a deep recession. Dollar shortages have forced the economy to adjust to lower imports, while the pressure on public finances has triggered sharp cuts in spending (excluding essential spending).

The economy is experiencing a significant contraction, with some experts suggesting it may be in the order of 10–15 percent – equivalent to what the United States experienced during the Great Depression. Second, the dramatic depreciation of the Lebanese pound and the fact that Lebanon is highly reliant on imports, has resulted in high inflation, resulting in a rapid erosion of real income among Lebanese.

This double shock has had enormous and debilitating social consequences, which may have existential repercussions for the country. The scale of wealth destruction today is catastrophic. The middle class is becoming poor as more than 1.6 million Lebanese are unable to meet their basic needs. Unemployment is skyrocketing, with some 200,000 individuals said to have lost their jobs prior to the coronavirus lockdown. The number is surely higher among the youth.

Home
Print
Newsletter
More on this topic
A toxic combination of sectarianism and rentierism: Lebanon's perfect stormInterview with Lebanese director Rabih Mroué: "First, they all have to go. And all means all"Middle East: Lebanon's protesters are here to stayInterview with Lebanese activist Nizar Hassan: Beirut's ruling elite may be down, but they are not yet out
Related Topics
Confessionalism, Coronavirus, Democracy and civil society, Economy, Hezbollah, Lebanese Civil War, Poverty, Shia Islam | Shiite Muslims, Social movements, Sunni Muslims | Sunni Islam
All Topics

The book "The Invention of the Maghreb: between Africa and the Middle East" prompts us to review basic terminology. This includes terms that we use almost every day as if they are ... END_OF_DOCUMENT_TOKEN_TO_BE_REPLACED

Asmaa al-Atawna's debut novel "Missing Picture" has been published in German translation (Keine Luft zum Atmen – Mein Weg in die Freiheit). In it, she describes life in Gaza from ... END_OF_DOCUMENT_TOKEN_TO_BE_REPLACED

Lebanon was long viewed as the Switzerland of the Middle East. Until relatively recently, billions were deposited in its banks. Gulf states were among the foremost investors in ... END_OF_DOCUMENT_TOKEN_TO_BE_REPLACED

To celebrate the bicentenary of the deciphering of the Rosetta Stone, the British Museum is running an exhibition entitled "Hieroglyphs: unlocking ancient Egypt" until February ... END_OF_DOCUMENT_TOKEN_TO_BE_REPLACED

Since Russia invaded Ukraine, Europe has been trying to find alternatives to Russian gas, inevitably zeroing in on the Arab Gulf states. In his commentary, Yemeni politician ... END_OF_DOCUMENT_TOKEN_TO_BE_REPLACED

Nouara may be 65, but she is ready to join thousands of others who burn their ID and pay traffickers for the chance of a new life in Europe. Zineb Bettayeb reports END_OF_DOCUMENT_TOKEN_TO_BE_REPLACED
Author:
Maha Yahya
Date:
Mail:
Send via mail

END_OF_DOCUMENT_TOKEN_TO_BE_REPLACED
Social media
and networks
Subscribe to our
newsletter