​​Houria Aïchi comes from a Berber ethnic group called the Shawiya who live on the Aures Plateau of the Atlas Mountains in north-eastern Algeria.

"I have very strong memories of my childhood," affirms Aïchi. "The culture I grew up in was characterised by family solidarity, a strict code of honour, and a vocal tradition that exists only in this particular region."

As with the Kabyle and the Tuareg Berber groups, music, or rather singing, is the domain of the Shawiya women.

"The girls live together with the women in their own courtyard, where they quite naturally grow into the traditions. There they act, write poems, embroider, make pottery, and hold performances in which they imitate men, even downright ridicule them. And, of course, they sing, in the manner in which our people have always sung and which the women pass on from generation to generation."

The Shawiya singing style sounds different than anything global musical pop culture has to offer. With an extreme falsetto whose tones are nasally produced, the voice sounds compressed and sharp, but all the more fascinating.

​​It is a style that cannot be learned, says Houria Aïchi, who often receives requests to teach Shawiya singing. Only those who hear the music in their mother's womb have a chance to develop such a voice.

What kind of songs make use of this characteristic vocalisation? While the Shawiya women mock men in their songs, they also admire them. Mounted herdsmen, the cavaliers, play a prominent role as legacy bearers for these mountain people.

The Prophet Mohammed as a noble horseman

Dedicated to them are countless songs that speak of burning love and flow with vivid metaphors: a cavalier is compared to mercury, and the Prophet Mohammed is even imagined as a noble horseman.

"As a girl, like all the others, I was infatuated with these cavaliers, with their commanding appearance. They would come on their horses, veiled, all dressed in white, and for me back then they were semi-real, semi-mythical creatures! I was overwhelmed by very powerful emotions, and this fascination for the cavaliers is still a source of inspiration for my artistic life today."

Despite her strong, traditional upbringing, Aïchi made the break with the conventional biography of a Berber woman, as did many in her generation in modern Algeria. In the 1970s she went to Paris to study psychology.

Even with her new external perspective, she remained true to her roots. She began researching the vocal tradition of the Aures, in the Musée des Hommes, for instance, where she discovered wax cylinder recordings, but also in her homeland, where she visited women and recorded their songs. She made excursions to other Algerian regions in order to document the dikhr, the sufi chants.

A discourse between two music worlds 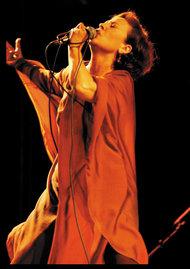 ​​For her new project she is returning again to the noble cavaliers, elevating courtly poetry with its topics of cavalier, lady and horse to modern standards. She is realising this vision together with the Strasbourg quintet L'Hijâz 'Car.

"For a long time I have wanted to confront the Aures tradition with contemporary sounds. I have often worked with jazz musicians in my career, and I knew it would work. I was fortunate in that Gregory Dargent, the director of the ensemble, could understand my emotional world and memories. This meant he was able to find arrangements that did not betray the tradition. It is really a discourse between two music worlds."

Her music, which boldly ranges from the pre-Arab world to world music avant-garde, features love lyrics and a proud galloping rhythm.

Aïchi's powerful, nasal voice unites with the strident male chorus and breathy flute trance; frame drums lay down the beat, meandering in between are improvisations on the oud and banjo accompanied by a subliminal bass clarinet.

Her music impressively proves that cultivating tradition is not about preserving ashes but keeping the flame alive: Aïchi's project translates the heritage of the Aures horsemen into a new, powerfully visual language and expands Berber culture with a modern variation far removed from ethno pop.

Dossier
Musical worlds
The Islamic world and Europe are home to a longstanding independent, modern music scene that transcends belly dance and folk music clichés. In this dossier we present some of its most important figures, styles and encounters.

END_OF_DOCUMENT_TOKEN_TO_BE_REPLACED
Social media
and networks
Subscribe to our
newsletter