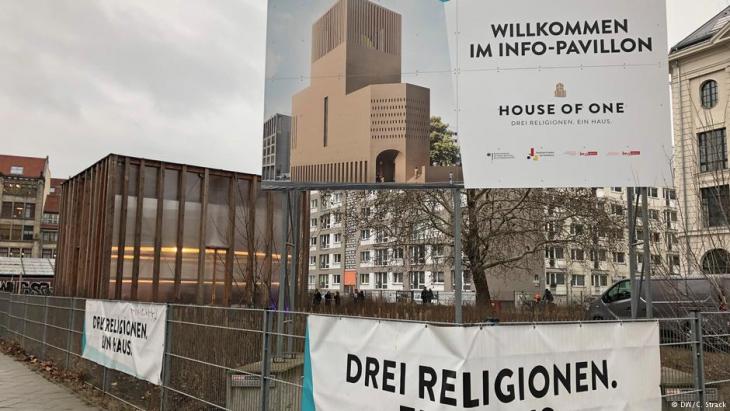 Religion can often mean conflict. But in Berlin, Christians, Jews and Muslims have come up with a project to counter this idea and are planning to set up three houses of prayer under one roof – preparations for building the "House of One" have begun. By Christoph Strack

Outside: the roar of the city. Petriplatz is situated on one of Berlin’s busiest major roads, six lanes of slow-moving traffic. Inside: the interior of a pavilion made of wood and plexiglass. The cold January wind blows through the cracks.

After a good twelve months or so, around 100 people have come to bid farewell to this information pavilion. Building work is about to start on Petriplatz, which is surrounded by 20-story East German tower blocks from pre-reunification days, new hotels and the shells of buildings under construction. The pavilion will be taken down in the next few days. And then the diggers will move in.

In a few years’ time, a globally unique project will stand here: the "House of One". A joint domicile for Christians, Jews and Muslims, comprising a church, a synagogue and a mosque. Three spaces connected to a central communal room. "This building," says Rabbi Andreas Nachama, "will send out a signal that the three religions can live together, work together."

It will soon be ten years since active representatives of the three monotheistic religions joined together to start an initiative for this communal building. The initiative became a foundation which is now well-respected in the city. And the idea became a design. For a long time, the plan seemed like an ambitious dream; the building – the model for which has already been exhibited internationally in Chicago and Paris – is special. Deep underground it preserves the archaeological remains of the city’s history and the various churches that were built, destroyed, rebuilt or bombed here. Above ground, it will rise some 32 metres into the sky, becoming a symbol of co-operation. 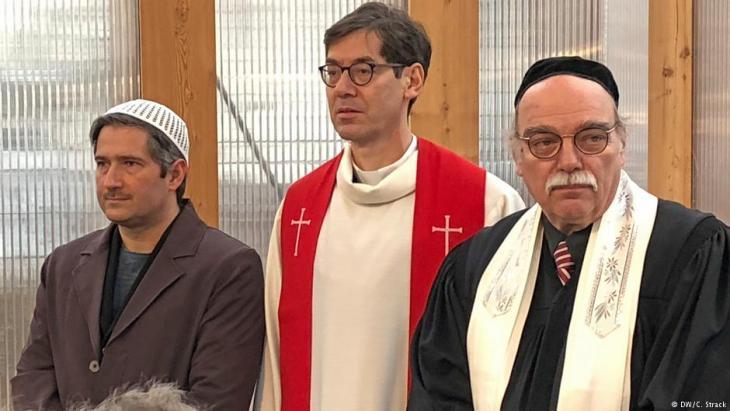 Representing Islam, Christianity and Judaism and united in their commitment to the "House of One": Imam Kadir, the Protestant pastor Gregor Hohberg, Rabbi Andreas Nachama (from left to right) belong to the project's board of trustees

The planned cost of the build is around 43.5 million euros. But donations are pouring in from various countries. In autumn, the German Federal Government promised to contribute ten million euros, if the state of Berlin and individual donations could match that funding. Now the foundation stone is due to be laid on 14 April 2020.

This date was chosen very deliberately. 14 April 1783 saw the premiere of "Nathan the Wise" in Berlin. The great play by Gotthold Ephraim Lessing (1729-1781) is probably the most important work of classic German-language literature on co-operation between Jews, Christians and Muslims. Lessing uses a "Ring parable" to explain that God loves all three monotheistic religions – and they are therefore duty-bound to be tolerant.

"The Ring Parable is almost too perfect for the idea of the 'House of One'," says Ulrich Khuon, the artistic director of the Deutsches Theater Berlin, who attended the ceremony. He likes the connection. The respected director then moves on from the situation in the roaring city and among the towering buildings to talk about the three religions. The strength of the three religions in this place may, he says, "lies – like the strength of art – in their virtual powerlessness and weakness, not in the manifestation of strength and suppression and significance, of power."

On 15 June, the "Islamkolleg" in Osnabruck officially launched its new training programme for imams in German. The college is intended to prepare Islamic theologians for their ... END_OF_DOCUMENT_TOKEN_TO_BE_REPLACED

For centuries, the great classical Persian author Hafez has inspired German writers. Translations, adaptions and homages have been created in his wake, and the process continues ... END_OF_DOCUMENT_TOKEN_TO_BE_REPLACED

Business in the Moroccan city of Tangiers is booming due to its location at the nexus of global trade routes. But many locals are failing to reap the benefits. What they crave ... END_OF_DOCUMENT_TOKEN_TO_BE_REPLACED

Morocco and the European Union are at cross purposes when it comes to the Western Sahara. And, as Germany does not support Moroccan claims to the territory, a major conflict has ... END_OF_DOCUMENT_TOKEN_TO_BE_REPLACED

Jewish voices are much more diverse than the public often sees. Jewish men and women who oppose the injustice of Israeli occupation in the West Bank deserve our respect and ... END_OF_DOCUMENT_TOKEN_TO_BE_REPLACED

They’ve already got the Louvre; they’ll soon have a Guggenheim Museum as well – and now the Emirates have added literature to their quest for cultural supremacy in the Arab world ... END_OF_DOCUMENT_TOKEN_TO_BE_REPLACED
Author:
Christoph Strack
Date:
Mail:
Send via mail

END_OF_DOCUMENT_TOKEN_TO_BE_REPLACED
Social media
and networks
Subscribe to our
newsletter