The idea of the "House of One", the place, the ceremony – it suits Berlin, which as a city upholds its secular character and yet offers a multiplicity of religions. In the pavilion, you can see Jewish kippahs and Islamic skullcaps. In the front row, the Bundestag’s vice president Petra Pau from the left-wing Linkspartei is sitting beside the publisher Friede Springer and Sawsan Chebli, the Muslim Social Democrat and State Secretary in Berlin. The government’s Commissioner for Jewish Life in Germany and the Fight Against Anti-Semitism is playing the violin in the string quartet, and elucidates the spirituality of the music. 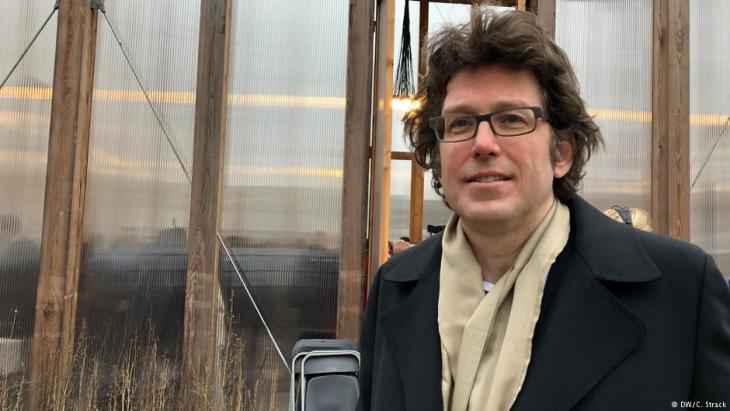 Foundation stone to be laid in April 2020: Wilfried Kuehn is the architect reponsible for building the "House of One". Construction will take about three years; the cost has been estimated at 43.5 million euros. 8.5 million euros in donations and contributions have already been received; 10 million euros have been pledged by the federal government with the proviso that the state of Berlin and private donors each contribute a further 10 million euros. The remaining 5 million euros is to be covered by donations

Rabbi Nachama, the evangelical Minister Gregor Hohberg and Imam Kadir Sanci sing prayers and ask for blessing for the project. "We pray for those who have responsibility in politics, religion and society, for Berlin, our country, Europe and the world."

Then there are speeches. Berlin’s State Secretary for Culture, Gerry Woop (Linke) says that the planned building will be a "site of religious co-operation and coming together". And he speaks of "outstanding architecture in one of the city’s central squares."

An architect in dialogue

Wilfried Kuehn is pleased. The Berlin architect whose design won through in an international competition, is planning the building everyone is now praising so highly. "Sacred buildings in themselves are always a challenge – one of the most enjoyable challenges there are," he says in conversation with Deutsche Welle. "We’re talking about a space that isn’t founded on practicalities, but on ideals and ideas, similar to art and music."

And then he tells us about the collaborative work on the "space allocation programme" for the "House of One", always in dialogue with the three religions. "And each time, we all discuss everything. Which is to say: we don’t talk to the Imam about the mosque and the Rabbi about the synagogue and the Minister about the church; we speak to all three about all the spaces. And that gives us a very interesting dialogue already, at the planning stage, which actually anticipates the character of a building like this."

The building will begin to grow in April 2020, and the "House of One" is due to open in 2023. "Of course," says the architect, looking at this unique project, "it’s also incredibly beautiful. Because they are experiencing their vocation on a deep level that is rarely possible elsewhere." Despite the roar of the city on all sides of the site.

The Kurdish YPG militia did the heavy lifting in the fight against the "Islamic State", yet many foreign YPG adherents, including Germans, have come home to find themselves under ... END_OF_DOCUMENT_TOKEN_TO_BE_REPLACED

Few Muslims have to date visited the Auschwitz-Birkenau concentration camp memorial site. Now high-ranking representatives of Muslims and Jews are travelling together to the place ... END_OF_DOCUMENT_TOKEN_TO_BE_REPLACED

The terror attacks in Paris, Brussels and Berlin were all carried out by men radicalised in jail. In Germany, politics and the judiciary are trying out new approaches to prevent ... END_OF_DOCUMENT_TOKEN_TO_BE_REPLACED

Elke Muller is fighting for her daughter Anna, who fell in love with a young Afghan and converted to Islam. The mother spoke to Esther Felden about feeling alienated and her fear ... END_OF_DOCUMENT_TOKEN_TO_BE_REPLACED

As historian Wiiliam Dalrymple writes in his essay, scholars are only now beginning to realise the extent to which the Mughal emperors adopted what most would assume to be ... END_OF_DOCUMENT_TOKEN_TO_BE_REPLACED
Author:
Christoph Strack
Date:
Mail:
Send via mail