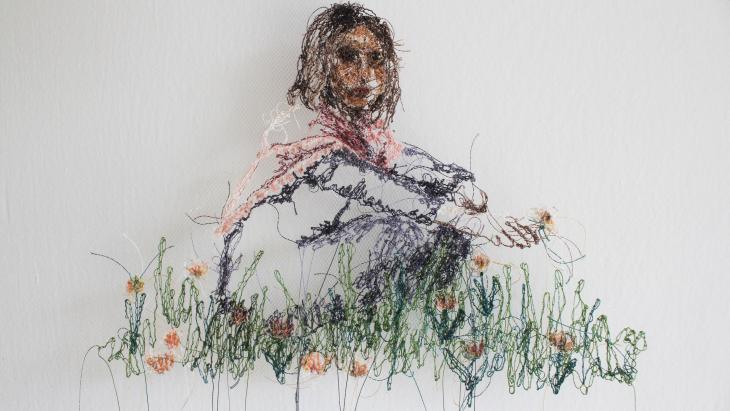 How can the various realities of Kurdish life, shaped by depression, resistance and war, be depicted in art? This is the question addressed by the “bê welat – the unexpected storytellers” exhibition in Berlin. Ceyda Nurtsch reports for Qantara.de

Four men in suits and ties have reported for a flag ceremony in a barren landscape. They stand to attention, their eyes turned rigidly upwards. One is raising a flag that flies outside the picture, above their heads. The men’s throats are supported by bulky medical neck braces. The image, entitled "The Flag", was created by Kurdish artist and author Sener Ozmen in 2010. Ozmen was born in 1971, in Idil, which lies in southern Anatolia on the border with Syria. His political works question existing authorities and taboos, always with a subtly ironic take on their subjects.

Ozmen is one of 13 artists included in the "bê welat – the unexpected storytellers" exhibition, at the neue Gesellschaft für Bildende Kunst in Berlin. For a lot of people, "Kurdishness" means politics first and foremost. It means war, activism, resistance. Artistic engagement with things like the ban on speaking your own mother tongue, with trauma and exile, is therefore "unexpected". And it is precisely this supposedly unexpected view of Kurdish artists that the exhibition’s curators wanted to capture.

They are looking beyond the news headlines about war, guerrillas, death, terrorists and freedom fighters, to pose the question: how do Kurdish artists depict the various realities of their lives? What is their answer to practices of assimilation and how they are labelled by other cultures? At the centre of all this is "bê welat": the condition of being homeless. Stateless.

Curating your own environment

One of the curators is the cultural studies expert and art educator Duygu Ors. "What was important to us with this exhibition, and what we wanted to see, is: what if we curate our own environment? What kind of legacy do we have when it’s always curated by other people, but without our involvement? That’s why we came together from our different perspectives." 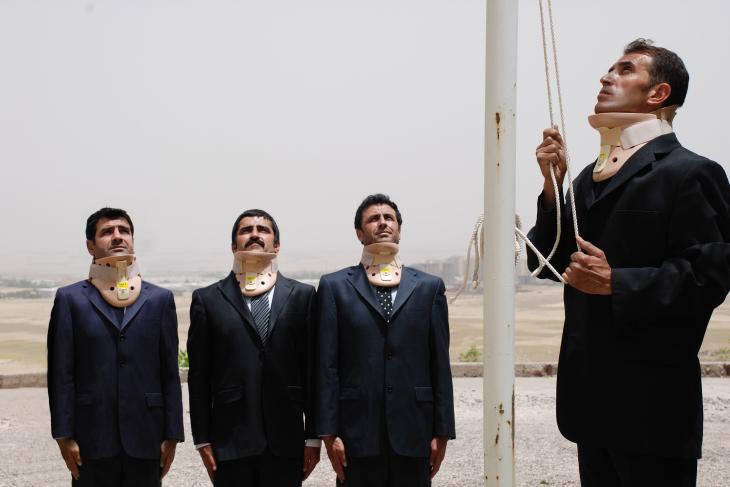 The photo "The Flag" by Kurdish artist and writer Sener Ozmen: born in 1971 in the south-east Anatolian town of Idil on the border with Syria, the artist questions existing authorities and taboos, always with a subtly ironic take on his subjects, as Ceyda Nurtsch writes. Ozmen is one of 13 Kurdish artists behind the exhibition "bê welat - the unexpected storytellers" at the Neue Gesellschaft für bildende Kunst in Berlin

One of the focuses of this exhibition, she explains, is the question of how art explore the territorial. That might be the depiction of a skewed living space, with a perspective from inside to outside. Or a domestic object that becomes a political symbol. A colourful woollen blanket is displayed right at the start of the exhibition. You can find blankets of this kind in many households in Kurdish regions. Families use them to keep warm during the cold winters. And as a makeshift shroud in which to wrap their dead. Here, it is folded into a triangle. The similarity with the U.S. tricorn hat is difficult to ignore.

The title of the work is "This blanket won’t keep the dead warm", and it is by Nuveen Barwari, an artist who lives in Nashville, USA. It was made in 2019, after Trump announced he was pulling U.S. troops out of Rojava, giving the Turkish army a green light for their invasion.

A tender look at the harsh realities

Just after the blanket is a large-format photo of a restaurant. An empty table with chairs and a view across a broad, hilly landscape. The photo is by Elif Kucuk, a visual artist and art director from Berlin who helped to curate the exhibition. It was taken in 2019 in Dersim, when she travelled there with her father. He left his homeland 40 years ago. "For me, but also for my father, these places really only consist of what used to be. Of things vanished, destroyed, and longed for." She captured this feeling with her camera. The shame of being one of the people who didn’t have to experience this violence, and the sense of duty that comes from that, flowed into her image editing, she explains. The picture exudes warmth. "I wanted to juxtapose the harsh reality with something soft," Kucuk says. "A tender interplay between the two." 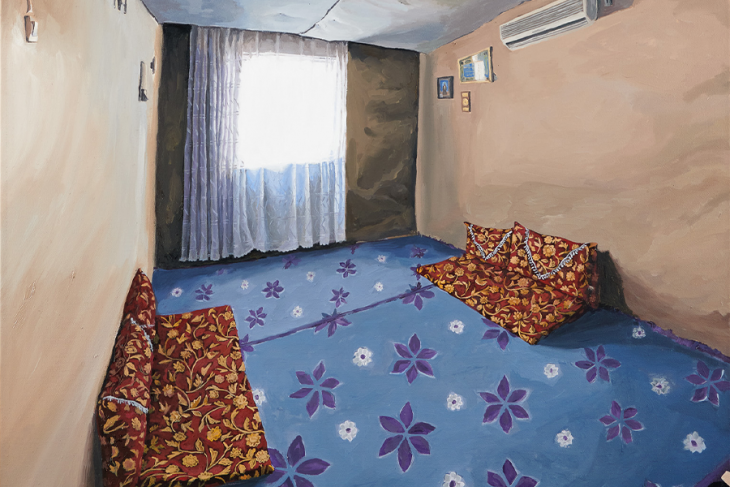 Zelal Ozkan's painting "Untitled": depiction of a skewed living space, with a perspective from inside to outside. Dealing with the question of how art deals with the territorial is an essential part of the exhibition, says one of the curators, cultural scientist and art mediator Duygu Ors. This is reflected in the title of the exhibition: the state of "bê welat", of homelessness and statelessness, is central to the experience of many Kurds

Beizar Aradini gives us another form of engagement with the reality of exile. She was born in 1991, in Mardin, south-eastern Turkey. She also migrated to Nashville with her family in 1992, and her works pose questions of belonging. She has embroidered family photos onto gossamer-fine fabric. The Americanised family in the group photo, a group of women dancing. They float in the breeze, light as a feather, hung from invisible threads; the ends of the embroidery threads dangle down. Visitors walk between them. By using embroidery, Aradini is taking up a family tradition in times of cultural assimilation and expulsion. Her art, she explains, is made between the conflicting poles of places and cultures. And always with a sense of never satisfying one or the other.

"When I repeat the same motion as my forebears, the thread becomes a new language between my parents and me. It becomes a bridge between generations in the diaspora. The strong thread holds the frayed parts of my Kurdish identity together. Through it, I show the myriad lives of Kurdish women who had to emigrate or were expelled."

Art as an attempted answer to war

The images, video and sound installations by Kurdish artists that make up this exhibition succeed in developing a language of their own. They neither accuse nor present themselves as victims. Rather, they oscillate in their own space that, although depicting reality, is very personal and artistic. This view is reiterated by Engin Sustam, who initiated the project. He was one of the "academics for peace" who opposed the military actions of the Turkish government in south-eastern Turkey. Now he lives and works in exile, in Paris.

"Resistance loomed large for the artists of the 1990s generation," he explains. "The younger generation is more subjective. They take a stance on issues like militarism, patriarchy, the murder of women or environmental destruction through their artistic practice. Their works are an attempt to give an answer to war, militarism and violent regimes." And perhaps art will create a successful peace process, says Sustam. "Perhaps it will be art that saves us."

The "bê welat – the unexpected storytellers" exhibition runs from 26 June to 15 August at nGbK in Berlin. There is a programme of conversations with the artists, film makers, musicians and academics to accompany the exhibition. For further information, see: https://ngbk.de/de/show/500/be-welat-the-unexpected-storytellers

As Syrian camps housing families of Islamic State fighters get more dangerous, there are calls to bring children out, even if the mothers don't want to go. The idea of separating ... END_OF_DOCUMENT_TOKEN_TO_BE_REPLACED

The Kurds are under attack from two sides: from Turkey, and from Iran. The situation in their territories in northern Iraq is becoming increasingly desperate. Birgit Svensson ... END_OF_DOCUMENT_TOKEN_TO_BE_REPLACED

Hundreds of porters, locally known as ‘kolbars’, cross the mountainous border between Iran and Iraqi Kurdistan all year round. With Iran’s economic crisis deepening, ever more ... END_OF_DOCUMENT_TOKEN_TO_BE_REPLACED

The Syrian conflict remains insoluble for the time being. Yet Europe could start managing it better. By reorganising humanitarian aid supplies, becoming more involved in the ... END_OF_DOCUMENT_TOKEN_TO_BE_REPLACED

Bachtyar Ali sends the hero of his latest novel – "Mein Onkel den der Wind mitnahm" – literally flying. Jamshid is so thin after his years as a political prisoner that a gust of ... END_OF_DOCUMENT_TOKEN_TO_BE_REPLACED

In this essay, renowned Lebanese journalist and writer Hazem Saghieh asks whether the Arab Levant, which stretches from Iraq in the east to Egypt in the west, will remain an ... END_OF_DOCUMENT_TOKEN_TO_BE_REPLACED
Author:
Ceyda Nurtsch
Date:
Mail:
Send via mail

END_OF_DOCUMENT_TOKEN_TO_BE_REPLACED
Social media
and networks
Subscribe to our
newsletter