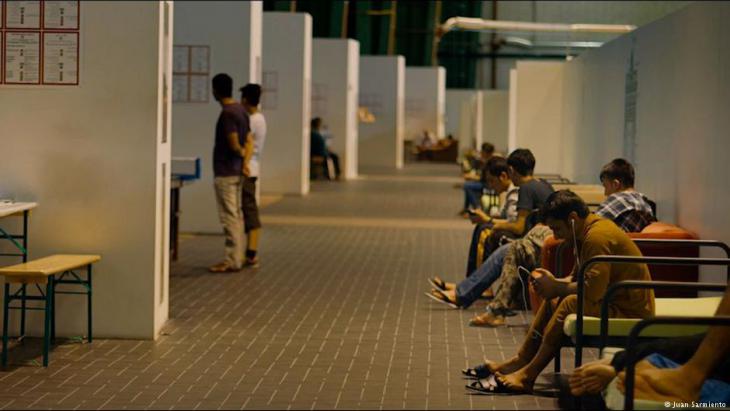 ″Central Airport THF″, the new documentary by Karim Ainouz intentionally turns the focus away from the image of refugees as victims. He is far more interested in how, under adverse circumstances, life endures in an atmosphere of waiting. By Rene Wildangel

The Brazilian director Karim Ainouz, a six-year resident of Berlin, begins his documentary with a guided tour of the historical premises of Tempelhof Airport, a gigantic structure built by the Nazis.

The Allied airlift after the Second World War made it an emblem of West Berlin until it ceased operating in 2008. Since then, the former airfield has become one of the city′s most popular parks. A place laden with symbolism, in constant flux over recent years like the whole of its city. One rather unexpected change was refugees moving in – intended as a stopgap solution.

Up to 1300 asylum seekers have lived at the airport since the end of 2015. Karim Ainouz accompanied the residents for a full year. His Algerian origins, Ainouz says, made it easier for him to build trust with the residents. Getting permission to film, however, was complicated.

As far as he′s aware, his is the only film able to be made on the site. Yet few events have created as many striking images as the ′refugee crisis′. In contrast to the breathless reporting in the news media, film offers an opportunity for more subtle and complex approaches. Another example would be the Italian documentary ″Fire at Sea″, which won Berlin′s Golden Bear in 2016, presenting the drama of flight and escape by means of the everyday lives of residents of the Greek island of Lampedusa.

Ainouz too, previously an award-winning feature-film director, chose an approach for his documentary that consciously differentiates it from news images. ″I think we′ve seen enough images of dramatic boat journeys and the misery on the routes into Europe,″ Ainouz says. Since the beginning of the crisis, not only the real tragedy of these pictures has upset him, but also the one-dimensional media portrayals reducing refugees to either pity-inducing victims or threatening invaders. 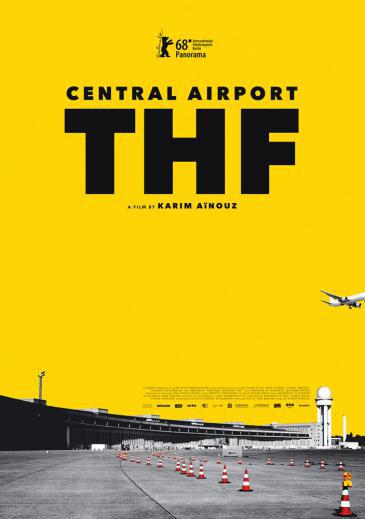 Not much dancing in limbo: Film director Karim Ainouz followed the lives of two refugees, Syrian Ibrahim and Iraqi Qutaiba for a period of twelve months. The result is a melancholy portrait with a dash of optimism, included in this year′s Berlinale Film Festival. Brazilian-born, yet of Algerian origin, Ainouz set out to create a portrait of a city within a city – and of a continent caught between Utopia and crisis

He hopes to achieve something very different with his documentary on the refugee home at Tempelhof – aside from the fact that he didn′t intend to make a film on the subject in the first place. Ainouz, an architect by training, had already secured funding for a film about the Berlin airports. The focus was to be on the as-yet-unopened BER airport and on Tegel, where flights were to be ended.

But he was refused permission to film at the scandal-ridden BER building site and flights are still taking off and landing at Tegel to this day. The only remaining option was Tempelhof and when Ainouz got there at the end of 2015 the first refugees were moving in. ″It was cold, it was inhospitable, there were tents pitched in giant hangars, it absolutely did not look like anyone could live there,″ the director recalls. And so came the decision to document the process.

The plan was actually for refugees to spend a limited period of time living at the airport, but in the challenged city that has turned into years. They don′t know how things will go on. All they know is that they can do nothing but wait. Waiting is all-pervasive.

The same applies to the film′s two main protagonists, Ibrahim Al-Hussein and Qutaiba Nafea. Ibrahim is originally from a village near Aleppo. He takes the role of narrator in the film, his memories of his village, the fruit plantations, his family repeatedly contrasting with the grey realities of life in the hangar.

Ibrahim is stuck in Tempelhof, as is Qutaiba, who worked in a hospital in Iraq, but now has to act as an ad hoc interpreter in the refugee camp. Neither of the men know whether their asylum application will be granted, when they will be able to leave the emergency accommodation or whether they′ll get a chance in Germany.

While the people inside the hangar are trapped in the existential limbo of waiting, the year passes outside its walls. Each new month is announced as a new chapter of the film, the changing seasons immersing the ex-airport′s environs in radically different moods.

At times the winter airfield looks like a Brueghel painting, littered with sledgers and warmly dressed strollers, while in mild summer nights it′s transformed into one big party. And when fireworks go off on New Year′s Eve, the echo of war bounces off the hangar walls.

The camera captures the bizarre beauty of the semi-circular airport building in a series of poetic stills. Only inside the hangars does life remain monotonous, with sudden switches from dark to light and vice versa when the bright neon lights are turned on at the exact same time every morning and evening.

There can be no real private life in the container-like structures, which look lost in the giant halls. Families live in extremely close quarters, without ceilings or windows due to ″Brandschutzbestimmungen″. For the residents, the German word for ″fire safety regulations″ is just one of many complicated new terms to learn.

What flashes by during the film′s ninety minutes is a long year in the life of traumatised refugees. Unwittingly, Tempelhof has become their temporary home. One small boy can′t remember any other place. Outside the fence, the park is bustling with Berlin life, but the two worlds remain separate.

″I′m not out to point the finger,″ says Ainouz. He is all too familiar with divided worlds, from Brazilian cities and the favelas on their perimeters. But his empathy is firmly with the residents on the other side of the fence.

He shows them not as victims, but as individuals. If at all, then as victims of German and Berlin bureaucracy, which is on the brink of collapse. How can people who live in this isolation be expected to integrate into a society they cannot encounter? ″I hate the word integration,″ Ainouz says, because he feels it refers to a one-way street.

Yet his film does not set out to make a political point; it makes no reference to the rise of the increasingly radical right-wing Alternative for Germany (AfD) and growing right-wing populism. It was a conscious decision to film only at Tempelhof airport.

The result is a melancholy portrait with a dash of optimism. Ainouz believes in Berlin′s strength as a multicultural and tolerant city. His protagonists reflect that view; they have now left Tempelhof and are making their way.

Both are present at the film festival. Many refugees are no longer living in the hangars; the city has built a new container village on the edge of the old airfield. ″Perhaps a new film will be made there,″ says Ainouz; after all, it seems this story is destined to run and run.

Home
Print
Newsletter
More on this topic
Germany′s Berlinale: Where film meets realityThe refugee debate: How do we want to live?"Paradises of the earth": The time is now
Related Topics
Cinema, Integration in Germany, Policy on refugees and migration, Refugees, Syrian Civil War
All Topics

Business in the Moroccan city of Tangiers is booming due to its location at the nexus of global trade routes. But many locals are failing to reap the benefits. What they crave ... END_OF_DOCUMENT_TOKEN_TO_BE_REPLACED

Morocco and the European Union are at cross purposes when it comes to the Western Sahara. And, as Germany does not support Moroccan claims to the territory, a major conflict has ... END_OF_DOCUMENT_TOKEN_TO_BE_REPLACED

Jewish voices are much more diverse than the public often sees. Jewish men and women who oppose the injustice of Israeli occupation in the West Bank deserve our respect and ... END_OF_DOCUMENT_TOKEN_TO_BE_REPLACED

They’ve already got the Louvre; they’ll soon have a Guggenheim Museum as well – and now the Emirates have added literature to their quest for cultural supremacy in the Arab world ... END_OF_DOCUMENT_TOKEN_TO_BE_REPLACED

The Germans have a fragmented perception of the conflict between Israel and the Palestinians, and their discourse is dominated by certain catchphrases. All the while, there is a ... END_OF_DOCUMENT_TOKEN_TO_BE_REPLACED

An unusual organisation brings Jews and Muslims together to fight hate and promote dialogue. In the small central German city of Marburg they have been jointly calling for an end ... END_OF_DOCUMENT_TOKEN_TO_BE_REPLACED
Author:
René Wildangel
Date:
Mail:
Send via mail

END_OF_DOCUMENT_TOKEN_TO_BE_REPLACED
Social media
and networks
Subscribe to our
newsletter