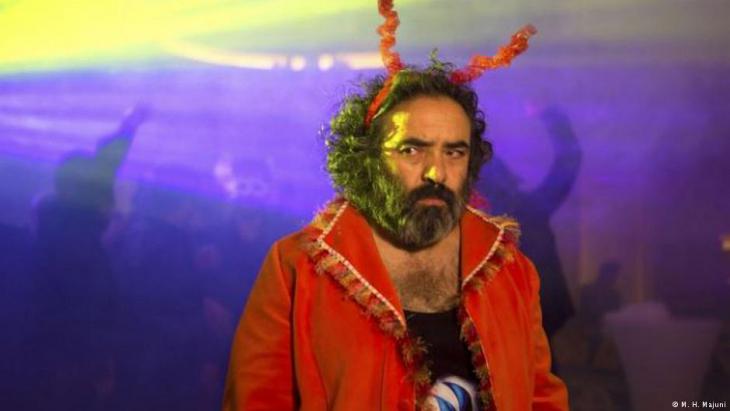 A film director desperate to be on a serial killerʹs hit list, AC/DC and Instagram likes: with his absurdist comedy, Mani Haghighi breaks with all the conventions associated with Iranian cinema. By Elizabeth Grenier

The Berlinale, renowned for being the most political of all major film festivals, has also served as a safe space for Iranian filmmakers affected by state censorship. Director Jafar Panahi, who in 2010 was sentenced to six years in prison and banned from filmmaking for 20 years, is one of the most prominent examples.

Panahi was forced to go underground to continue his work and was duly rewarded in Berlin, with his docu-fiction "Closed Curtain" winning the Silver Bear for best script in 2013 and "Taxi" taking home the Golden Bear in 2015.

Mani Haghighi's Berlinale Competition entry "Khook" ("Pig") reflects on Iranian film censorship by putting a blacklisted director at the centre of the story. While we never discover why the fictional director Hasan Kasmai (played by Hasan Majuni, a renowned theatre actor in Iran) was banned from filmmaking, he has a cult following for films like "Rendezvous in the Slaughterhouse" and owns a large collection of western rock band t-shirts – a larger-than-life photo of Angus Young from band AC/DC adorns his bedroom wall.

Pesticide ads and a senile mother

As Kasmai waits for his ban to be lifted, he works on commercials. His current pesticide ad features women dressed like cockroaches in what could be a scene from a 60s psychedelic children's show. While the outlawed filmmaker is condemned to professional stagnation, his personal life isn't much better. The final blow comes when his muse, actress Shiva Mohajer (Leila Hatami, winner of the Silver Bear for best actress for "A Separation"), takes on a role with his rival, a director of epically ambitious and poetic films. At least his mother – who is apparently going senile and frequently swears – still adores her genius son.

The dark tone of "Khook" is set in the opening scene as a group of schoolgirls excitedly gossip about the latest comments posted on social media – until they run into a severed head. It seems a serial killer is beheading the country's most famous filmmakers and marking their forehead with the word "pig". The fact that the narcissist Kasmai isn't among the big names targeted by the murderer adds to the director's profound insecurity.

With social media like Twitter and Facebook banned in Iran, the plot ironically plays out with young women trying to track down the murderer using Instagram – before Kasmai himself takes to the medium. And in a country where a series of dissident intellectuals have been murdered by internal government operatives and a region where countries still practice legal beheadings – as do jihadist terror groups — there's obvious symbolism behind the decapitation theme.

At a Berlinale press conference, Haghighi admitted he was worried that his ironic approach might overly belittle such a serious issue. But he hoped his comedic film might also help to better comprehend such tragedy. "You can only take something seriously if you can laugh about it," he said.

Although it took some time for the authorities to give the production a permit, "Pig" was approved by Iran's Ministry of Culture and Islamic Guidance. It is set to open in the country's theatres next month and the director is hopeful it won't be censored. "The situation is very volatile now, things are changing, so we'll see," said the director. 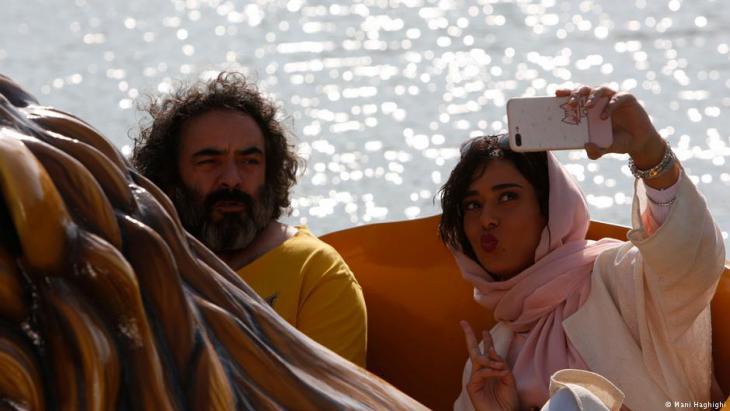 A selfie for Instagram: Haghighi's absurdist comedy is a far cry from the image that's been revealed through the Iranian New Wave, a minimalistic, poetic film genre that shares some of the characteristics of Italian neo-realism and French New Wave cinema

Haghighi's absurdist comedy is a far cry from the image that's been revealed through the Iranian New Wave, a minimalistic, poetic film genre that shares some of the characteristics of Italian neo-realism and French New Wave cinema. Its international reputation grew widely after Iranian director Abbas Kiarostami won the Palme d'Or in 1997 with "Taste of Cherry".

Other notable figures in the so-called Second Iranian New Wave include Mohsen Makhmalbaf and his daughter Samira; Majid Majidi (the first Iranian to be nominated for an Academy Award for "Children of Heaven" in 1997); Asghar Farhadi (Oscar winner for "A Separation," 2011 and "The Salesman," 2017); and of course Golden Bear winner Jafar Panahi.

Haghighi initially suffered from the fact that his filmmaking style did not follow this established tradition. Indeed, his first feature in 2003 was rejected by festivals for not being "Iranian" enough. "Iranian films were supposed to be simple, humanist tales of innocence with minimalist story structures, non-professional actors, realist narratives," the director pointed out, referring to the influence of Kiarostami. "I'm still in love with many of those films. But I also feel suffocated by the pressure of their legacy on Iranian filmmakers."

Haghighi's atypical works have made him a Berlinale regular: to date, four of his films have been shown at the festival – "Men At Work" (2006) and "Modest Reception" (2012) in the Forum section and the genre-bending "A Dragon Arrives!" was part of the competition in 2016.

"Why is Iranian cinema supposed to be a tour guide of the country?" the filmmaker asked. He's tired of the fact that the image of Iran popularised in the West wants to "see how victimised we are." By portraying ballsy women, a hard rock-loving filmmaker and a population addicted to social media, "Pig" definitely contributes to changing this perception.

Though Haghighi admitted he found the repeated political questions he keeps getting at festivals "extremely annoying", he later specified that he was tired of discussion being limited to his political views. Still, the director had to acknowledge that Iranian filmmakers can't avoid politics. "[It's] a political film, for sure," he added.

Iranian author Fariba Vafi is adept at describing everyday scenes and concealing within them something ambiguous, in parts strange and grotesque. She writes novels – which have ... END_OF_DOCUMENT_TOKEN_TO_BE_REPLACED

Her grandparents are Jews – born in Tunisia and Algeria. Director Cleo Cohen has now broken the silence about this with a very personal debut. By Nadine Wojcik END_OF_DOCUMENT_TOKEN_TO_BE_REPLACED

Life imprisonment for crimes against humanity: that was the sentence handed down to Anwar Raslan in the world's first trial of a member of the Syrian torture system. Matthias von ... END_OF_DOCUMENT_TOKEN_TO_BE_REPLACED

Every year in December, the team at Qantara.de takes a look back at the articles that proved most popular with our readers. This year is no different. Here is a run-down of the ... END_OF_DOCUMENT_TOKEN_TO_BE_REPLACED

With his new album, "A Voice Keeps Calling Me", the Persian santur player Kioomars Musayyebi is building bridges from Iran across the Arab world to European early music. By Stefan ... END_OF_DOCUMENT_TOKEN_TO_BE_REPLACED

Former lawyer Said Haider has invented a chatbot for those seeking advice on anti-discrimination issues – Meta is the first chatbot of its kind in the world. In conversation with ... END_OF_DOCUMENT_TOKEN_TO_BE_REPLACED
Author:
Elizabeth Grenier
Date:
Mail:
Send via mail

END_OF_DOCUMENT_TOKEN_TO_BE_REPLACED
Social media
and networks
Subscribe to our
newsletter