In the "Valley of the Clueless" in Saxony, where Arab contract workers were once employed alongside GDR factory workers, East Germans and refugees meet for a peculiar trip down memory lane. Rene Wildangel reports from this year's Berlinale

At the centre of Kunert's film is the former GDR combine "Fortschritt" (Progress) in Neustadt in Saxony. In the days of the GDR this region was known as the "Valley of the Clueless" because reception was so poor in the border zone with Czechoslovakia that not even the news broadcast by West German television, widely listened to elsewhere, could be picked up.

A company manufacturing agricultural machinery was once located here but, like so many other GDR factories, it was closed when the Wall came down, becoming a huge industrial ruin. The former workers' hostel next door has been a shelter for Syrian refugees since 2015.

Almost 30 years after the fall of the GDR, the young Syrians – the film features men only – face bleak prospects, because the community life that once flourished here, financed by the combine and made up of its workforce, has all but disappeared.

The symbolic opening scene shows three of the Syrian refugees struggling with a relic from the GDR; only after several attempts do they succeed in starting the engine of a Trabant car. They proceed to drive through a picturesque but deserted landscape to Neustadt near Dresden, embarking on a trip down memory lane that is rife with absurdities.

In the ruins of the factory, they meet former employees, who share their memories for the purpose of the film as part of a kind of "GDR integration course". In role-playing games, they are asked to share with the refugees their own version of everyday life in the GDR and are thus confronted with their own past. Dressed like children in the youth organisation Thaelmann Pioneers, the young Syrians salute two former teachers; wearing National People's Army uniforms they complete drill exercises and a flag ceremony. 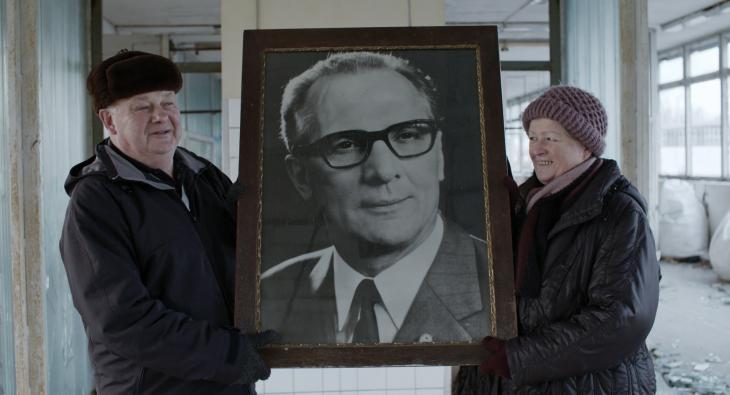 Haunted by the past: taking PEGIDA and the hateful reactions to the arrival of refugees in East Germany as his starting point, director Florian Kunert sets out on a cinematic expedition in "Fortschritt im Tal der Ahnungslosen" (Progress in the Valley of the Clueless) to uncover buried memories of the GDR era and contradictory perspectives

For the Syrians, who were born after the reunification of the two Germanys, these activities are excursions into an alien, bygone world. Their own traumas are only hinted at here: on camera, the abandoned ruins of the combine resemble destroyed houses in East Aleppo after the evacuation. In one scene, the young men re-enact urban warfare, thick branches serving as rifles.

The GDR and the "socialist brother state" of Syria

The film also hints at the once-close relations between the GDR and Syria. The first Syrian students came to East Germany in 1956. In the decades that followed thousands of people from Arab states were employed as contract labourers in the GDR.

A French artist has used photos of torture from Abu Ghraib for an oversized artwork at the Berlin Biennale. Reactions from fellow artists have been mixed, with some criticising ... END_OF_DOCUMENT_TOKEN_TO_BE_REPLACED

Since Ali Khamenei, Iran's most powerful man, has openly and unconditionally come out in support of Putin's war in Ukraine, logistical help is on its way, with an allegedly ... END_OF_DOCUMENT_TOKEN_TO_BE_REPLACED

It is possible to write about the Holocaust and the crimes of colonial powers without downplaying anything. In her latest book, Charlotte Wiedemann focuses on the numerous blind ... END_OF_DOCUMENT_TOKEN_TO_BE_REPLACED

This year Annemarie Schimmel, the great German scholar of Islamic studies, would have turned 100. Unique within the German and international academic community of her time, ... END_OF_DOCUMENT_TOKEN_TO_BE_REPLACED

The highly controversial Indian blockbuster "The Kashmir Files“, on the exodus of Kashmiri Hindus in the 1990s, is characterised by unilateral representations, negative ... END_OF_DOCUMENT_TOKEN_TO_BE_REPLACED

END_OF_DOCUMENT_TOKEN_TO_BE_REPLACED
Social media
and networks
Subscribe to our
newsletter