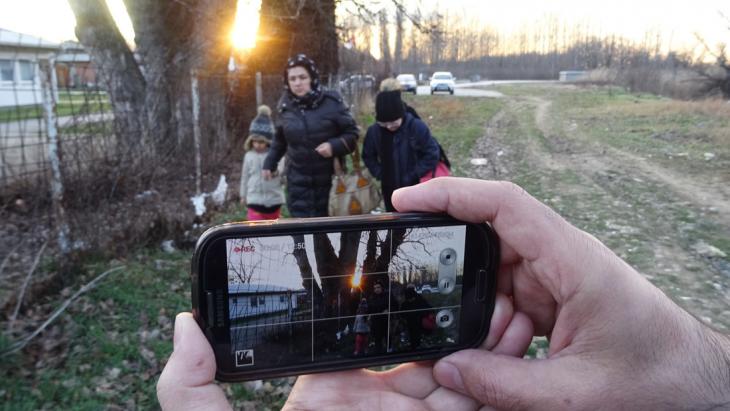 Threatened with death by the Taliban, director Hassan Fazili fled to Europe with his family, filming their odyssey on his mobile phone. Itʹs not the first time that the refugee trek to Europe has been documented, yet the result is a film that not only serves as a political chronicle of our time, but is also a work of art. By Rene Wildangel

In the eyes of the Taliban, Hassan Fazili had committed a number of serious crimes: he had released the film "Peace in Afghanistan", in which he condemned the belligerence of a former Taliban commander, he made a film about womenʹs rights, and opened a cafe for artists in Kabul.

Following massive threats from Islamists, he was forced to close the cafe and flee Afghanistan with his wife Fatima and daughters Narges and Zahra. Living in exile in Tajikistan, the family attempted to find a country willing to accept them as refugees.

The camera shows Fatima holding their asylum application to Australia, a thick stack of paper with hundreds of pages and endless accounts of persecution, including international reports corroborating their story. However, facing deportation from Tajikistan, the family had no other choice than taking the dangerous return drive by car to Mazar-e-Sharif.

At the border, Fatima reluctantly put on a burka. "I am hot enough as it is and now this too!" Even in the most adverse conditions, the Fazili family never lost its sense of humour. 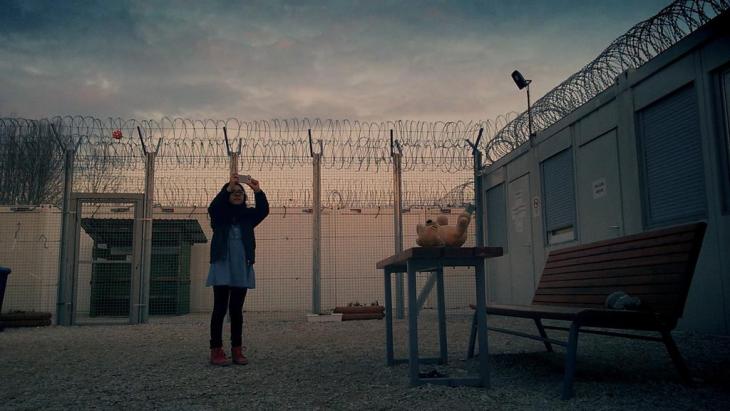 An entertaining and beautiful film: "with an eye for the many brief moments, details, moods, sunsets, the fleeting glimpses of everyday family life, not to mention the moments of happiness and joy and the charm and wit of his own family, Fazili demonstrates unique filmic talent," writes Wildangel

Back at home, an old friend who had joined the Taliban warned the director that his life was in extreme jeopardy. The family decided to leave the country for good, this time taking the hazardous route to Europe, through countries, some of which they had never heard of before.

Hassan and Fatima decided something else as well. They wanted to document their journey. Over the next two years, a video camera was their constant companion. In this case, this actually meant three mobile telephones. Why did they choose this medium? "It was much simpler while travelling," explains the director. "People usually have a mobile phone on them, so it aroused less attention."

Progress was excruciatingly slow and the outcome uncertain. The family made their way across the Iranian-Turkish border to Istanbul. Crossing to Europe by boat, however, was going to cost 4000 euros and, as is generally known, might well have ended in death.

The family opted to take the land route to Bulgaria, always travelling by night and helplessly dependent on deceitful refugee smugglers. After being arrested by the Bulgarian police, they ended up in the Ovcha refugee camp. Things were relatively good for the family there, says Narges, until a man attempted to attack them.

Very different Western reactions to the suffering in Ukraine and the Arab world show that there is a profound rift among cultures. Essay by Michael Young END_OF_DOCUMENT_TOKEN_TO_BE_REPLACED

The documentary "Nadia" tells the incredible story of Nadia Nadim, who was forced to flee from the Taliban as a child and became a football star. By Annabelle Steffes-Halmer END_OF_DOCUMENT_TOKEN_TO_BE_REPLACED

Three award-winning female directors appeal to the international film industry to save Afghan cinema. Supporting women filmmakers is more important than ever. By Christine Lehnen END_OF_DOCUMENT_TOKEN_TO_BE_REPLACED

Russia's ranking on the World Press Freedom Index has fallen again over the Kremlin's wartime censorship of the Ukraine conflict. From Myanmar to Mexico, journalists continue to ... END_OF_DOCUMENT_TOKEN_TO_BE_REPLACED

Ideally, those Europeans currently welcoming Ukrainian refugees would show the same sympathy to Syrians, Afghans and others fleeing war beyond the continent. But, argues Ian ... END_OF_DOCUMENT_TOKEN_TO_BE_REPLACED

Comments for this article: That our voices wonʹt be silenced

I hope the family from Afghanistan wins their case and finds peace and rest in Gernany.

END_OF_DOCUMENT_TOKEN_TO_BE_REPLACED
Social media
and networks
Subscribe to our
newsletter