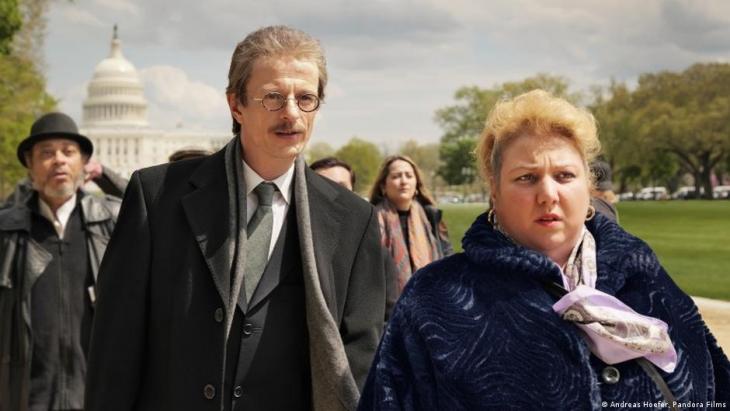 Andreas Dresen's Berlinale film "Rabiye Kurnaz vs. George W. Bush" is the gripping portrayal of a mother determined to get her son released from Guantanamo. By Torsten Landsberg

Murat Kurnaz fit the bill: he was the son of a family of Turkish origin living in Germany, had grown a long beard and become increasingly interested in Islam. He frequented a mosque in his hometown of Bremen and finally travelled to Pakistan on 3 October 2001. He wanted to learn more about the Koran there, Kurnaz later stated. But a few weeks after the September 11 attacks in 2001, Kurnaz was suspected of trying to join the Taliban in the fight against the United States.

What came next is widely known – and yet comes across as completely new in Andreas Dreesen's film "Rabiye Kurnaz v. George W. Bush" that premiered recently at the Berlinale film festival. His movie, based on a screenplay by Laila Stieler, tells the story from his mother's point of view and begins on 3 October 2001.

Kurnaz, the "Taliban from Bremen"

On that day, Murat's mother, Rabiye Kurnaz gets a call from her son who has left their home and gone to Frankfurt before continuing on to Pakistan. His mother is furious and goes to the mosque and even to the police, believing someone must have urged her son to embark on the trip.

Soon after, the press has gathered in front of her apartment building to report on the "Taliban from Bremen". The housewife and mother takes off, racing through the city in a hand-me-down Mercedes on her way to the office of human rights lawyer Bernhard Docke. She doesn't leave his office until he accepts her son's case.

Kurnaz was arrested in Pakistan in November 2021 and by the beginning of 2002, he was in the U.S. prison camp at Guantanamo Bay, Cuba. He was under suspicion of terrorism, but without an arrest warrant or charges. Rabiye Kurnaz initially trusts the rule of law; everything will work out. "Why don't you write a letter, a man like you," she tells her lawyer, as if the problem could be solved quickly. For a long time, she keeps her husband Mehmet in the dark about her pursuit of justice. The fight against world politics and the tricky navigation through the authorities is her business alone. 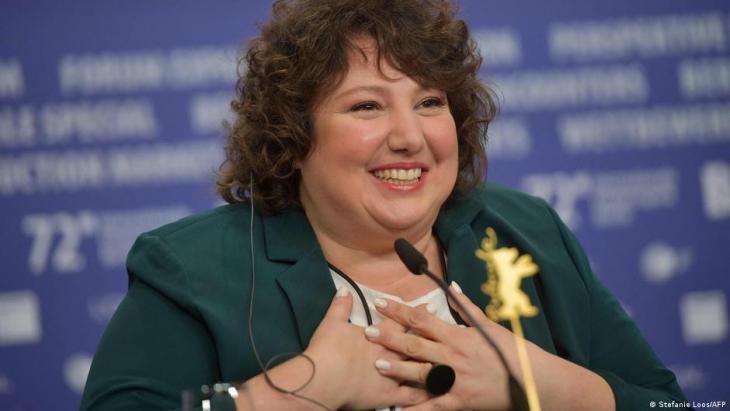 For her portrayal of Rabiye Kurnaz, 41-year-old comedienne and actress Meltam Kaplan received the Silver Bear for Best Leading Role at the Berlinale. "She plays a mother with an engaging warmth that is both cheerful and pained," writes Torsten Landsberg. "She embodies the maternal instinct of someone who will do anything to protect her offspring, even after continued setbacks and despite her own waning strength." Kaptan herself said her portrayal was a "tribute" to Rabiye Kurnaz, who "lives out her maternal strength unconditionally"

A blend of humour and seriousness

One of the film's strengths is that despite its serious subject matter, there is space for levity and humour. The hands-on nature of the Turkish protagonist contrasts with the stodgy-minded northern German lawyer, who does everything he can for the cause, but is nonetheless kept on his toes by his client. The two characters play off of one another: at a certain point, it is the lawyer who motivates and encourages Rabiye when she feels she is running out of steam.

The lengthy jumps in time in the film reflect the gruelling duration of the legal process. "Months would go by when there wasn't any news or any progress," screenwriter Laila Stieler said at the Berlinale, where the film premiered on 12 February 2022. She noted that the attorney, Docke, had called it a "test of patience".

The film shows Rabiye Kurnaz giving a short speech in Washington to people who share her concern, some of whom also have children detained in Guantanamo. She speaks in German, soberly, as her lawyer translates. Then she takes to the microphone again and shares her feelings and her worries for her child – and the powerlessness of not being able to help him: "I'm his mum, after all," she says through her tears.

"Torture? I thought as much"

Time and again in the movie, there is a sense of hope, which is reflected in cheerfulness and gatherings depicted in the film. But rather than deliverance, disappointment ensues: the ruling of the Supreme Court in Washington – according to which Kurnaz' case must be heard in an ordinary court – is countered by the U.S. government's military tribunals, which are promptly equated with the status of a court.

When attorney Docke tells Rabiye that her son Murat was tortured in Guantanamo, she tries to take it in her stride. She had thought as much.

Later, when Murat is finally to be released and the family is about to greet him at Incirlik Air Base in Turkey, it is a stranger who actually gets out of the car: there has been a case of mistaken identity. 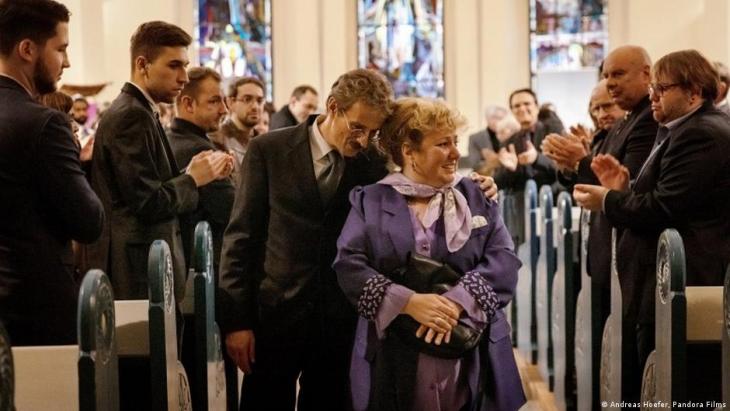 The case of Murat Kurnaz, a German scandal: in early 2002, Kurnaz landed in the U.S. prison camp Guantanamo in Cuba – under suspicion of terrorism, but without an arrest warrant or charges. The United States had actually already offered to extradite Murat Kurnaz to Germany in September 2002. As two committees of inquiry revealed, the German government did not take up the offer. At that time, ironically, current Federal President Frank Walter Steinmeier was responsible as intelligence coordinator in the Federal Chancellery. The man from Bremen has never received an apology or compensation for his time in Guantanamo. "If you later realise you were wrong, you should admit your mistakes," said director Andreas Dresen. He said that he found this gesture lacking from German President Steinmeier. It was only after the intervention of the then new German Chancellor Angela Merkel that Kurnaz was finally released in August 2006

Andreas Dresen cast the 41-year-old comedian Meltem Kaptan in the lead role – her first starring role in a feature film. She plays a mother with an engaging warmth that is both cheerful and pained. She embodies the maternal instinct of someone who will do anything to protect her offspring, even after continued setbacks and despite her own waning strength.

Her portrayal is "a tribute to her endeavour", Kaptan said, referring to Rabiye Kurnaz, who "lives out her maternal strength unconditionally". Kaptan scooped the Silver Bear Award for Best Acting at this year's Berlinale.

Both Rabiye Kurnaz and Bernhard Docke were involved as advisors in the creation of the screenplay. Docke also appears briefly in the film as a judge at the Supreme Court in Washington, alongside film director Andreas Dresen. In real life, Docke has also been an honorary constitutional judge in the German state of Brandenburg since 2012. Currently, there are still 39 people imprisoned in Guantanamo.

"Rabiye Kurnaz vs. George W. Bush" is also a political commentary. At one point in the film, attorney Docke must admit that his own German government was not working for the release of his client.

The United States had actually already offered to extradite Murat Kurnaz to Germany in September 2002. As two committees of inquiry revealed, the German government did not take up the offer. Ironically, German President Frank-Walter Steinmeier was head of the Chancellor's Office from 1999 to 2005 and, as intelligence coordinator at the time, was responsible for ensuring that Murat Kurnaz did not return to Germany earlier.

The courage to apologise

Kurnaz has never received an apology or compensation for his time in Guantanamo. "If you later realise you were wrong, you should admit your mistakes," said director Dresen. He said that he found this gesture lacking from German President Steinmeier. The courage to apologise distinguishes a statesman from a politician, added actor Alexander Scheer, on the sidelines of the Berlinale premiere of the film.

In the film, however, Andreas Dresen highlighted the efforts of the then new German Chancellor Angela Merkel, who assumed office in November 2005. The film reveals that in that same year still, under Merkel, the Chancellor's Office responded to a letter from lawyer Bernhard Docke after just a few days. Angela Merkel also raised the case to then President George W. Bush during her inaugural visit to Washington in January 2006.

Murat Kurnaz was finally released in August 2006, after nearly five years in Guantanamo.

Home
Print
Newsletter
More on this topic
Film on the case of Murat Kurnaz: ''A Scandal of Democracy''The Murat Kurnaz case: A parable on the divisibility of human rightsMurat Kurnaz, the "Bremen Taliban": Inside Guantnamo
Related Topics
'Islamic State' | IS, 9/11, Al-Qaida, History of the Near and Middle East, Human rights, International terrorism, Islam and the West, Rule of law, Taliban, U.S. policy in the Middle East
All Topics

"Flugt" is the world's first museum dedicated to the stories of those forced to flee. The new museum, which focuses on the fates of refugees then and now, is housed in a former ... END_OF_DOCUMENT_TOKEN_TO_BE_REPLACED

Foresight is needed to turn the tide of German policy. Being independent of Russia must not lead to dependence on authoritarian regimes in the Middle East. By Kristin Helberg END_OF_DOCUMENT_TOKEN_TO_BE_REPLACED

Rumi's poems, though generally stripped of their Islamic symbolism, are hugely popular around the world. Yet Islamic mysticism is still very much at the heart of these verses. ... END_OF_DOCUMENT_TOKEN_TO_BE_REPLACED

Very different Western reactions to the suffering in Ukraine and the Arab world show that there is a profound rift among cultures. Essay by Michael Young END_OF_DOCUMENT_TOKEN_TO_BE_REPLACED

The documentary "Nadia" tells the incredible story of Nadia Nadim, who was forced to flee from the Taliban as a child and became a football star. By Annabelle Steffes-Halmer END_OF_DOCUMENT_TOKEN_TO_BE_REPLACED
Author:
Torsten Landsberg
Date:
Mail:
Send via mail

END_OF_DOCUMENT_TOKEN_TO_BE_REPLACED
Social media
and networks
Subscribe to our
newsletter