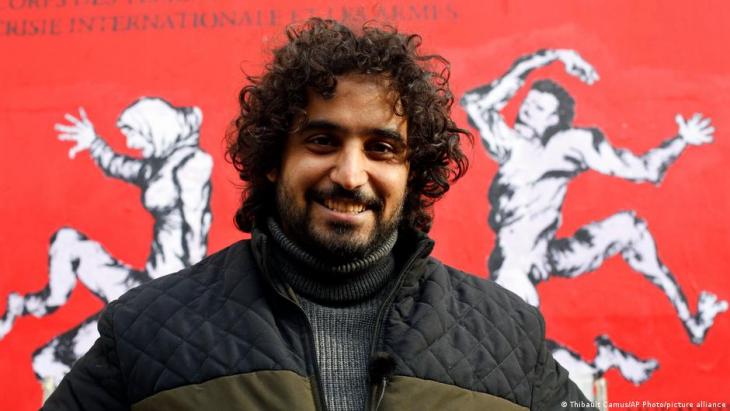 Seven black-and-white portraits line up against a red background. Huge black holes replace the figures' eyes. "Wars are one of the evil roots, turning humans into monsters, victims, and others watching and ignoring," writes artist Murad Subay in a caption next to his mural.

The Yemeni street artist has painted his latest work on the facade of one of the buildings of the Berliner Union Film Ateliers (BUFA), which serves as a film campus. Located next to the former Tempelhof Airport, the first film studios on the site were built in 1912; classics such as Marlene Dietrich's Blue Angel were partly shot there.

BUFA is also the main location of the Human Rights Film Festival Berlin, which closed on 25 September. Now in its fourth year, the festival's 2021 edition ran under the title "The Art of Change".

As one of these artists for change, Subay was invited to take part in a group exhibition during the festival and to create this piece. The figures are part of his series "Faces of War", which express how "the horrors of war swallow everything," explained Subay.

Street art as a symbol of hope

Born in 1987 in Dhamar, Yemen, Subay started painting on buildings after the Yemeni revolution in 2011.

Like many in the Arab Spring protests that erupted that year in the Middle East and North Africa, Yemeni demonstrators were initially calling for better economic conditions and reforms against corruption. But, within a few months, armed supporters joined the opposition, leading to heavy street fighting against the loyalist security forces in Yemen's capital, Sanaa. 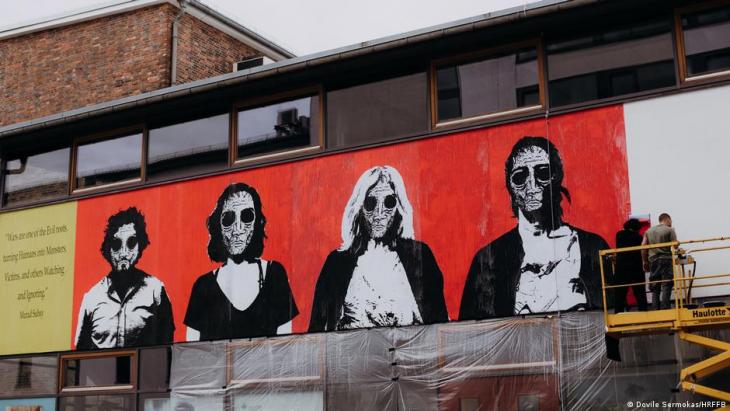 The horrors of war swallow everything: seven black-and-white portraits line up against a red background. Huge black holes replace the figures' eyes. "Wars are one of the evil roots, turning humans into monsters, victims, and others watching and ignoring," writes artist Murad Subay in a caption next to his mural

The buildings scarred by missiles became Murad Subay's canvas. "I wanted to show that there is art in these places, that there's hope, that people are still fighting in a very depressing moment, when a country is deciding on its history," he explains.

Even though he's often been compared to fellow political street artist Banksy, Subay does not work alone and anonymously. He rather involves the local population in his series of artistic "campaigns", as he calls his street art projects.

During his first campaign in 2012, called "Color the Walls of Your Street", he invited people passing by to join artists and friends to create a space of collaborative creation, allowing everyone to either pick up a paintbrush or simply meet and talk.

His goal was to ensure that "art is never far from the people," he says. "In Yemen, we don't have galleries or museums, so art has to go to the people in the street."

More campaigns followed, with the artist launching his fifth series, "Ruins", as conflict took over the country at the beginning of 2015.

Yemen's ongoing multisided civil war began in late 2014, when Houthi insurgents – Shia rebels with links to Iran and a complex history with Yemen's Sunni Muslims – took control of Sanaa. Shortly after, the rebels also seized the presidential palace, leading to the government's resignation. A coalition of Gulf states led by Saudi Arabia then got involved in the conflict.

The war's impact on the population is disastrous. "The world's worst humanitarian crisis continues to deteriorate with unprecedented levels of needs," states a press release from the Directorate-General for European Civil Protection and Humanitarian Aid Operations (DG ECHO), published on 22 September.

According to the DG ECHO, there are 20.7 million people in Yemen who are in need of assistance, which amounts to 66% of the population; more than 16.1 million of them lack reliable access to food. 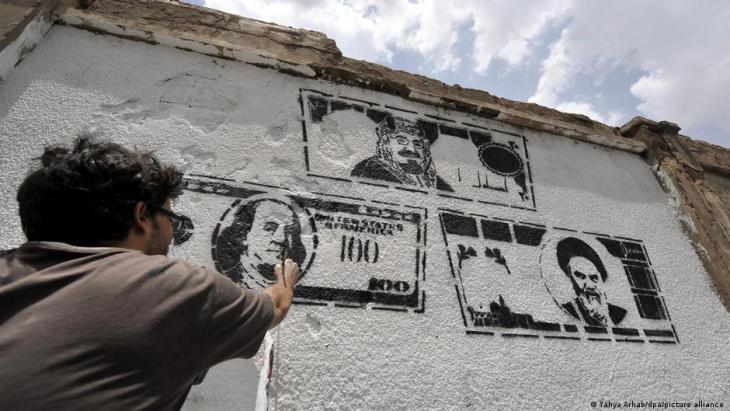 Neverending proxy war: the impact of Yemen's ongoing civil war, stoked by foreign powers Saudi Arabia and the UAE, with Shia Iran backing the Houthi rebels, is disastrous. According to the DG ECHO, 20.7 million people in Yemen are in need of assistance, which amounts to 66% of the population; more than 16.1 million of them lack reliable access to food. Human rights organisations estimate there are 4 million internally displaced people in Yemen, with more than 10,000 households having been displaced in 2021 alone because of active fighting

Human rights organisations also estimate that there are 4 million internally displaced people in the country, with more than 10,000 households having been displaced in 2021 alone because of active fighting.

Amid the conflict, Subay had to leave Yemen. Activists and people with opinions were expected to take sides, says the artist. "But I criticised all the parties because they are all committing crimes."

One of his brothers, a journalist, was shot twice in the knees, and Murad was investigated on several occasions; he could no longer paint freely. They left for Egypt. Murad landed in Paris two years ago through the Artist Protection Fund, an international program to provide relief and safe haven to artists in danger.

He remained active in France, creating for instance a mural denouncing the sale of  French arms to Saudi Arabia. Germany also contributes to the proxy conflict by exporting arms to countries fighting within the Saudi-led coalition.

"Unfortunately, the war is benefitting many companies in Europe," says Subay, who also deplores the silence of the international community. "The Yemenis are the ones paying the price."

Despite the bleak perspectives for his home country, the artist says that what matters most to him is to remain committed to activism: "My goal now is to focus on education," he says. "Because all evils come from ignorance."

Recent efforts to rehabilitate Assad are setting a damaging precedent for accountability, just as the international community is expressing the need to hold Russia to account for ... END_OF_DOCUMENT_TOKEN_TO_BE_REPLACED

Nouara may be 65, but she is ready to join thousands of others who burn their ID and pay traffickers for the chance of a new life in Europe. Zineb Bettayeb reports END_OF_DOCUMENT_TOKEN_TO_BE_REPLACED

Education for girls and women is still possible in Afghanistan, says Reinhard Eroes of the Kinderhilfe Afghanistan initiative. In interview with Elisa Rheinheimer, he talks about ... END_OF_DOCUMENT_TOKEN_TO_BE_REPLACED

Locals in the Middle East have said European critics are showing bias and hypocrisy when they condemn Qatar. Observers agree that Qatar has had to deal with more criticism than ... END_OF_DOCUMENT_TOKEN_TO_BE_REPLACED

In Doha, Arabs from Morocco, Tunisia, Egypt and Algeria are gathering to celebrate the first ever FIFA World Cup to be held on Arab soil. The criticism from Europe? Over the top, ... END_OF_DOCUMENT_TOKEN_TO_BE_REPLACED
Author:
Elizabeth Grenier
Date:
Mail:
Send via mail

END_OF_DOCUMENT_TOKEN_TO_BE_REPLACED
Social media
and networks
Subscribe to our
newsletter