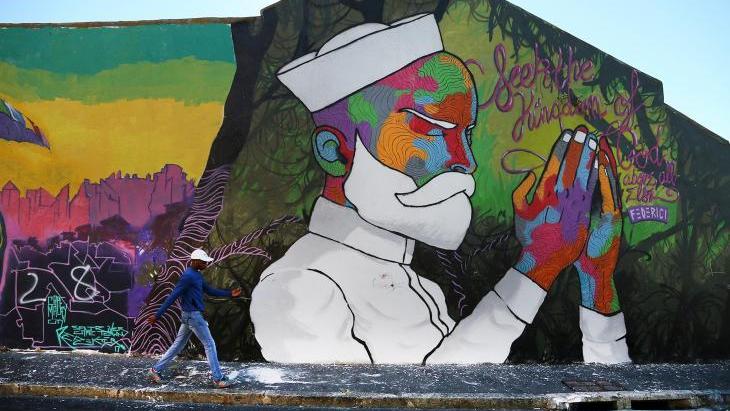 Last year was one of a kind. 2020 saw the rapid spread of the coronavirus pandemic, putting a stop to the hajj. Though peace in the Middle East remains a pipedream, there was something of a diplomatic thaw. At the same time, human rights across the region remain under attack. Here are Qantara.de's ten most read articles of 2020

1. Violence against women: Femicide on the rise in Turkey

The recent murder of Turkish student Pinar Gultekin by her ex-boyfriend has sparked outrage in Turkey. Women's rights activists are calling for the government to tackle the widespread problem of femicide in the country, but their calls are being met with silence from the government and in some cases even tear gas and rubber bullets by police. By Daniel Bellut

2. COVID-19 pandemic: How is Turkey dealing with the corona crisis?

3. Women′s rights in Islam: Can feminism be Islamic?

5. Religion and media in Turkey: Reviving Sufism with Yunus Emre

The TV series "Yunus Emre: The journey of love" was a massive hit in Turkey when it first aired four years ago. But this popular television spectacle is not the only evidence of a renewed interest in Sufi spirituality in Turkey. Marian Brehmer reports from Istanbul

6. Spain and Ibn Arabi′s heritage: The great master of Murcia

7. Sexual repression in the Arab world: Anguish, love and poetry

8. Goethe and Islam: Religion has no nationality

9. Muslims and the COVID-19 pandemic: No pilgrims in times of coronavirus?

Saudi Arabia has called on Muslims across the world to put their hajj preparations on hold for the time being. The corona pandemic is impacting one of the central pillars of Islamic life. But can Saudi Arabia’s cancellation of the hajj be justified theologically? By Lena-Maria Moeller and Serdar Kurnaz

Muhyiddin Ibn Arabi (1165-1240) remains one of the most influential Arab philosophers and mystics. James Morris, Professor of Islamic Theology at Boston College, explains why his writings are still popular and why, today, they give the most productive answer to fundamentalist approaches in Islam. Interview by Claudia Mende

Giessen, Eichsfeld, Kusel, Berlin – cars bearing old German number plates are the latest trend on the streets of Cairo. Many Egyptians regard the discarded plates as chic. What ... END_OF_DOCUMENT_TOKEN_TO_BE_REPLACED

Tunisia has been going through a severe economic and political crisis in recent years. More than one in three young people there are unemployed. For many skilled, qualified and ... END_OF_DOCUMENT_TOKEN_TO_BE_REPLACED

German imams have publicly expressed their solidarity with the women of Afghanistan. In a letter of protest, the clerics say that the Taliban regime's decree barring women from ... END_OF_DOCUMENT_TOKEN_TO_BE_REPLACED

At the end of every year, the team at Qantara.de gives you a run-down of the ten most-read articles on the site over the past 12 months. Here is a quick overview of the stories ... END_OF_DOCUMENT_TOKEN_TO_BE_REPLACED

Social engagement is often motivated by religious factors. A new book explores the background to these community efforts and appraises how effective they are in helping to ... END_OF_DOCUMENT_TOKEN_TO_BE_REPLACED

The government in the Netherlands, one of the last European nations to abolish slavery, has made an historic apology. But some feel that there is still a long way to go. By Ella ... END_OF_DOCUMENT_TOKEN_TO_BE_REPLACED
Date:
Mail:
Send via mail

END_OF_DOCUMENT_TOKEN_TO_BE_REPLACED
Social media
and networks
Subscribe to our
newsletter