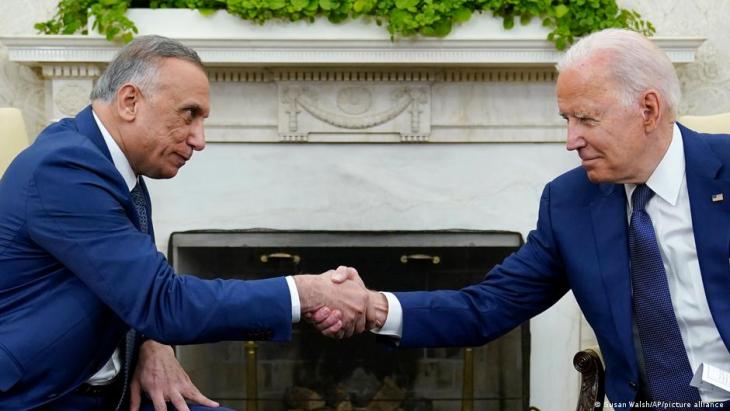 US President Joe Biden and Iraqi Prime Minister Mustafa al-Kadhimi have sealed an agreement formally ending the US combat mission in Iraq by the end of 2021, but US forces will still operate there in an advisory role.

The agreement comes at a politically delicate time for the Iraqi government and could be a boost for Baghdad. Kadhimi has faced increasing pressure from Iran-aligned parties and paramilitary groups who oppose the US military role in the country.

Biden and Kadhimi met in the Oval Office for their first face-to-face talks as part of a strategic dialogue between the United States and Iraq.

"Our role in Iraq will be ... to be available, to continue to train, to assist, to help and to deal with ISIS as it arises, but we’re not going to be, by the end of the year, in a combat mission," Biden told reporters as he and Kadhimi met.

There are currently 2,500 US troops in Iraq focusing on countering the remnants of Islamic State. The US role in Iraq will shift entirely to training and advising the Iraqi military to defend itself.

The shift is not expected to have a major operational impact since the United States has already moved toward focusing on training Iraqi forces.

Still, for Biden, the deal to end the combat mission in Iraq follows decisions to carry out an unconditional withdrawal from Afghanistan and wrap up the US military mission there by the end of August.

Together with his agreement on Iraq, the Democratic president is moving to formally complete US combat missions in the two wars that then-President George W. Bush began under his watch nearly two decades ago.

A US-led coalition invaded Iraq in March 2003 based on charges that then-Iraqi leader Saddam Hussein's government possessed weapons of mass destruction. Saddam was ousted from power, but such weapons were never found.

In recent years, the US mission was focused on helping defeat Islamic State militants in Iraq and Syria.  (Reuters)

More on this topic
US enemy and friend of Iran? Muqtada al-Sadr, the most powerful man in IraqThe papal visit to Iraq: The blessing of Pope Francis – "Salaam, salaam, salaam"Iraq's new government: Mr Kadhimi begins a clean-up operationInterview with Iraqi author Sinan Antoon: The West and its cliched view of Iraq
Home
Print
Newsletter
MoreAll Topics

END_OF_DOCUMENT_TOKEN_TO_BE_REPLACED
Social media
and networks
Subscribe to our
newsletter