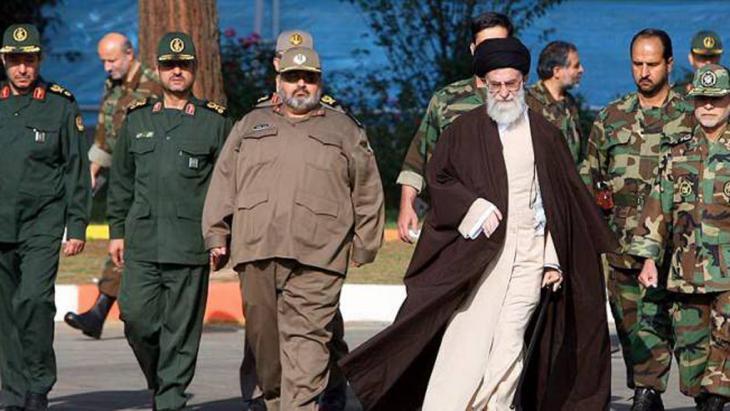 U.S. President Joe Biden seems increasingly determined to keep the "terrorist" designation on Iran's Revolutionary Guards, which Tehran is demanding be removed before it returns to a deal on curbing its nuclear programme.

"Each side is just hoping that the other would blink first," Ali Vaez, an Iran expert from the International Crisis Group, a conflict-prevention think tank, told journalists.

Negotiations opened a year ago in Vienna to revive the landmark 2015 agreement that was supposed to prevent Iran from acquiring nuclear weapons.

Under the presidency of Donald Trump, the United States walked out of the agreement in 2018 and reinstated economic sanctions against Tehran, which in response, shrugged off restrictions imposed on its nuclear activities.

Biden wants Iran to return to the agreement, provided that Iran resumes those commitments.

Despite early hopes, the talks are deadlocked and the emissaries have not been in the Austrian capital since 11 March.

However, a draft compromise is still on the table, after resolution of most of the thorniest issues.

The fate of the Guards is the final obstacle blocking the talks: the Islamic Republic is demanding the removal of its elite ideological force from the US blacklist of "foreign terrorist organisations."

The Iranians argue that it was only added to the list by Trump to increase pressure on them after the US exit from the 2015 agreement, also known by its acronym, the JCPOA.

But the Americans have shot back that the subject is in no way related to the nuclear issue.

He added that Iran should negotiate in "good faith" and reciprocity.

The United States has said it does not negotiate in public and had avoided making any clear statement on the fate of the Revolutionary Guards' status.

But Price's comments appeared to confirm that the Biden administration was hardening its position against removing the designation after a split between its diplomatic fringe, allied with part of the military, and the political wing of the White House.

The former had favoured some kind of gesture toward the Guards on the grounds that dropping the group from the blacklist would have few real-world consequences, while the latter feared criticism from Republicans before the November midterm elections.

Questioned at the beginning of April, Secretary of State Antony Blinken gave a first indication of a toughening stance by saying that the Revolutionary Guards were indeed, in his eyes, a "terrorist organisation."

"I'm not overly optimistic at the prospects of actually getting an agreement to conclusion," he told NBC News.

Influential Washington Post columnist David Ignatius then reported that Biden was preparing to rule out the organisation's removal from the blacklist.

"I don't think the final decision has been taken yet, but the president is certainly leaning in that direction," said the Crisis Group's Vaez.

Vaez hopes, without harbouring any illusions, that a compromise might be found by delisting the Guards while keeping their overseas branch, the Quds Force, on the blacklist.

But privately, US officials are suggesting that even such a compromise as that may no longer be on the table.

Vaez recognises that any gesture toward Iran on such a sensitive issue "would be used by the opponents and critics to crucify the Biden administration" by denouncing its weakness in the face of such a sworn enemy of the United States.

Making matters worse, the Revolutionary Guards back other US foes – such as Hezbollah in Lebanon, or the Yemeni Houthi rebels, or even some Iraqi militias – and have been blamed for numerous attacks against US soldiers or interests in the Middle East.

Several elected officials within the president's own Democratic camp are also opposed to their removal from the blacklist.

"And that is the political cost that I think the president is reluctant to pay," said Vaez, who, however, warns that a failure to reach a deal will also exact a high political cost.

"The Republicans are bound to accuse him of allowing Iran to become a virtual nuclear weapons state under his watch now," predicted the expert.    (AFP)

END_OF_DOCUMENT_TOKEN_TO_BE_REPLACED
Social media
and networks
Subscribe to our
newsletter