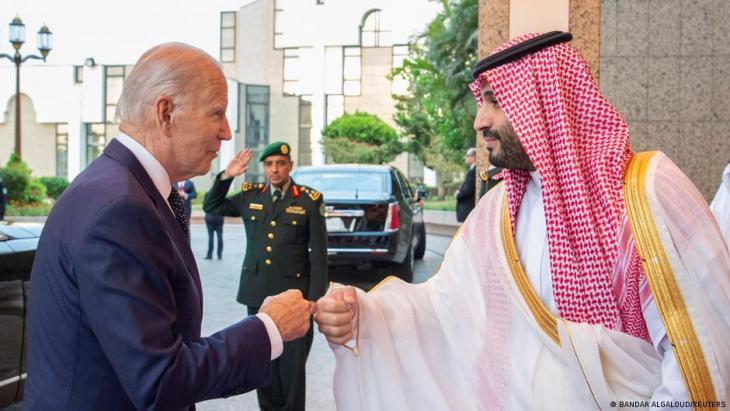 With his fist bump greeting for a man he previously called a pariah, US President Biden has paved the way for Saudi Crown Prince Mohammed bin Salman's return to the international stage. All other items on the agenda of his Middle East trip faded into the background. By Karim El-Gawhary

For Crown Prince Mohammed bin Salman of Saudi Arabia, the purpose of US President Joe Biden's visit to Jeddah was already served the moment they met, when Joe Biden and Mohammed bin Salman looked each other in the eye and shared a Covid-era fist bump. The American had an earnest look on his face; the Saudi suppressed a smile.

Mohammed bin Salman, or MBS as he is known in the US media, had achieved exactly what he wanted: a tacit acknowledgment by the US President that there is no getting around Saudi Arabia's de factor ruler. The fist bump has made MBS respectable again on the international stage. And this despite the fact that the White House had previously emphasised that the trip was not about "greetings" but about "meetings", i.e. that the greeting was of secondary importance compared to the content of the subsequent talks.

For Joe Biden, the whole affair resembled the legendary Humiliation of Canossa. Back when he was a presidential candidate, he had quite openly laid responsibility for the murder of Saudi dissident Jamal Khashoggi at MBS's door and even called the crown prince a "pariah". The CIA made no secret of the Americans' firm belief that the hit squad that waylaid Khashoggi at the Saudi consulate in Istanbul in 2018 and subsequently dismembered his corpse was acting on behalf of the crown prince.

In the end, though, US national interests took priority over human rights. In these days of war in Ukraine and the resulting energy crisis, the US urgently needs more Saudi oil to keep down the price of the black gold. In the face of disputes with Russia and rivalry with China, Saudi Arabia's loyalty is now of the essence. MBS will savour his restored status and continue to style himself a regional heavyweight, as he has done in recent months. The logical consequence of his apparent redemption in the eyes of the US is thus likely to be a higher international profile. 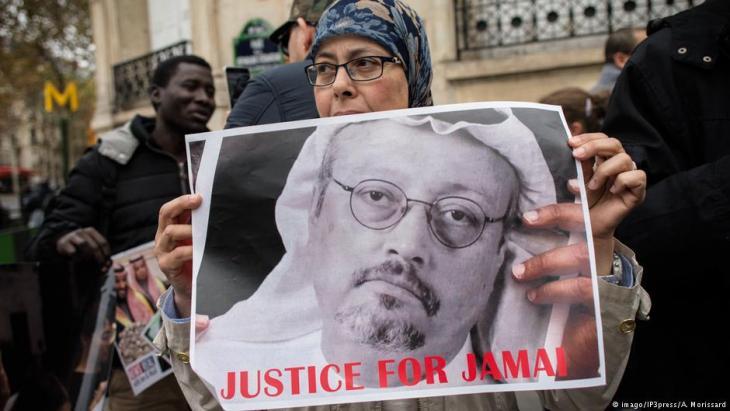 Justice for Jamal? The US President told the press after his meeting with Mohammed bin Salman that he had raised the issue of Jamal Khashoggi's murder with the Crown Prince. The Saudis said that the prince had stressed that he was not personally responsible for Khashoggi's murder. Both sides subsequently disputed the other's account of the discussion. Meanwhile, "the crucial question of who is ultimately to be held accountable for Khashoggi's murder remained unanswered," writes Karim El-Gawhary

Is this the accountability that was promised?

The meeting between the president of the USA and the crown prince lasted three hours, twice as long as originally planned. The way in which the Americans presented what was said at the meeting to the public was designed primarily to save face for Joe Biden. He had directly addressed Khashoggi's murder, the US President told the press afterwards: "For an American president to be silent on an issue of human rights is inconsistent with who we are and who I am. I'll always stand up for our values."

During the meeting, the crown prince had stressed that he was not personally responsible for Khashoggi's murder. "I indicated I thought he was," said the US President as he described what had transpired. Period. Then they moved on to other items on the agenda.

The crucial question of who is ultimately to be held accountable for Khashoggi's murder remained unanswered. Khashoggi's erstwhile fiancée, Hatice Cengiz, wrote in a tweet from Khashoggi's Twitter account what she thought he would have said to Biden: "Is this the accountability you promised for my murder? The blood of MBS's next victim is on your hands."

Cengiz drew criticism for her statement from US Congressman Brad Sherman. He pointed out that poorer countries in particular would suffer from high oil prices and warned of the resulting famines, failing to mention that energy prices would also be a major issue in the upcoming US Senate elections. "So it's very easy for Mrs. Khashoggi [Hatice Cengiz] to say: don't worry about those hundreds of thousands of people who will die, avenge my fiancé. You've got to be adults here," said Sherman in a BBC interview.

After the meeting with MBS, the Saudis gleefully reported on the meeting with Joe Biden, quoting portions of the conversation in the media. The crown prince had described Khashoggi's murder as deplorable, they said, adding that the case is ongoing. They also reported that MBS had pointed out to Biden that journalists are also murdered in other places around the world, citing in particular the killing of Palestinian journalist Shireen Abu Akleh, a US citizen, in the Israeli-occupied territories. According to Saudi media reports, the crown prince went on to say that the US had also made mistakes, for example at the Abu Ghraib prison in Iraq.

Other Saudi officials brought up the innocent victims of US drone strikes around the world, for which no one has ever been held accountable. It was a public reckoning, one that demonstrates just how much the US position in the Middle East has been undermined in recent years now that the country has retreated more and more both militarily and politically.

That, however, was precisely the impression that Biden strove to counteract on the second day of his visit to Saudi Arabia. "The United States is committed to being an active, engaged partner in the Middle East," he said at the Gulf Cooperation Council Summit, which was attended by the kings, emirs and sultans of the Gulf as well as the presidents of Egypt and Iraq and the king of Jordan.

"We will not walk away and leave a vacuum to be filled by China, Russia or Iran," Biden added. And then he took up the topic of Iran again, catering to the views of his hosts in the Gulf, just as he had done during his first stop in Israel. Biden reiterated that Iran must be barred from obtaining a nuclear weapon. To that end, he said, he wanted to work closely with states in the region to counter Iranian threats there. Using the tools of diplomacy, the US would seek to rein in Iran's nuclear programme. In short, it was a summit meeting where much was said and few concrete decisions were reached.

The entire second day of Biden's trip seemed like a smokescreen, put up to disguise the main purpose of his trip: begging a Saudi Crown Prince whom he had previously shunned to step up oil production. His efforts apparently met with success: MBS announced plans to increase Saudi production capacity by one million barrels per day to 13 million. The exact terms remained vague, however, as MBS still wishes to obtain approval from the OPEC+ oil alliance.

All the other Arab autocrats present are sure to have noted with relief the upshot of the previous day's meeting between Biden and MBS. When Biden took office, they had briefly feared that the White House would take a harsher line on human rights issues. But the US-Saudi fist bump was a conclusive sign that no matter what the Arab dictators do to their own people, they have nothing to fear from the American side.

Tourists have been returning to Tunisia, Egypt and Morocco. But, given the global uncertainty caused by the Ukraine war, will the comeback be enough to save a struggling sector, ... END_OF_DOCUMENT_TOKEN_TO_BE_REPLACED

In this essay, renowned Lebanese journalist and writer Hazem Saghieh asks whether the Arab Levant, which stretches from Iraq in the east to Egypt in the west, will remain an ... END_OF_DOCUMENT_TOKEN_TO_BE_REPLACED

By 2050, the Middle East and North Africa could be dealing with many more elderly people suffering from dementia. A lack of facilities, specialists and local knowledge means the ... END_OF_DOCUMENT_TOKEN_TO_BE_REPLACED

Foresight is needed to turn the tide of German policy. Being independent of Russia must not lead to dependence on authoritarian regimes in the Middle East. By Kristin Helberg END_OF_DOCUMENT_TOKEN_TO_BE_REPLACED
Author:
Karim El-Gawhary
Date:
Mail:
Send via mail

END_OF_DOCUMENT_TOKEN_TO_BE_REPLACED
Social media
and networks
Subscribe to our
newsletter